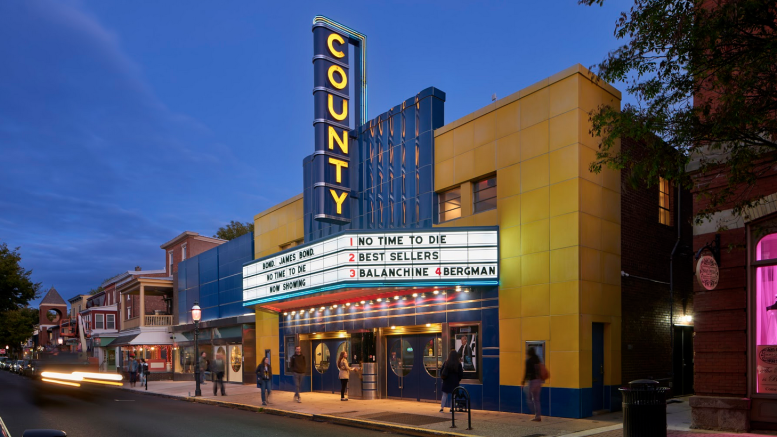 The historic County Theater in Doylestown, Pa., reopened its doors after a comprehensive renovation and expansion designed by Voith & Mactavish Architects (VMA) LLP. With its blue and gold facade and iconic marquee tower, the theater—which dates from 1938—has long stood as a premier destination for cinema lovers and a stylish Art Deco centerpiece of E. State Street. Now owned by a community-based non-profit organization that supports independent films in addition to screening major studio releases, the theater was struggling to keep up with the demands of its growing audience. VMA’s renovation, designed after more than 20 meetings with neighbors and the community, maintains the entire historic building with minimal alterations while expanding it to add capacity, open new programming possibilities, and create an up-to-date theater experience that caters to its audiences’ desires.

The first of these desires: more screenings and events. VMA’s renovation answers it by adding a 180-seat, stadium-style auditorium made possible by the County Theater’s purchase of an adjacent lot. Housed in a brick addition that complements the original theater without overshadowing it, the new theater makes space for more feature, classic, and foreign film screenings, plus opens new program possibilities like streaming live theater and opera. A small thrust stage creates room for discussions, presentations, and smaller events, bolstering the County Theater’s role as a neighborhood hub that screens local filmmakers’ work and hosts community forums and other gatherings. Blue panels on the facade and a storefront continue the design language of the historic County Theater building while integrating it into the surrounding Doylestown streetscape.

The addition also resolves a central design challenge: how to equip the historic theater for contemporary use without—as the brief stipulated—changing the original building. The addition houses a new lobby that extends the original one and incorporates an added box office with modern ticketing systems. By integrating the new reception space with the existing one, the design maintains the original entry sequence past the historic box office. The new lobby also makes room for a concession stand—which the building previously lacked—and adds space for audience members to mingle and discuss the films they’ve just watched together.

The interior design of the new lobby continues the vocabulary of the original, with curving walls, blue and gold finishes, and an art-deco-inspired concession stand accented with aluminum bands that recall the theater’s marquee tower. The addition also introduces more administrative offices, service areas, and accessible restrooms, supporting the County Theater’s expanding operations and helping it better serve its audiences.

In the original auditorium, VMA integrated new seats and state-of-the-art A/V systems to create a contemporary theater experience within the historic building. VMA also restored the existing lobby to its original condition, bringing it new life after more than 80 years of use.

The pandemic impacted the project’s construction in 2020, but the project team adapted together. The original schedule had been phased to allow the theater to remain active throughout, but after the pandemic forced the theater to close, the schedule was successfully compressed into a single phase. The County Theater reopened in late Summer 2021 and has been enthusiastically welcomed back by members of the community who have returned for screenings, private events, and special programs.

Contemporary Art and Art Deco Converge in an Innovative Hotel