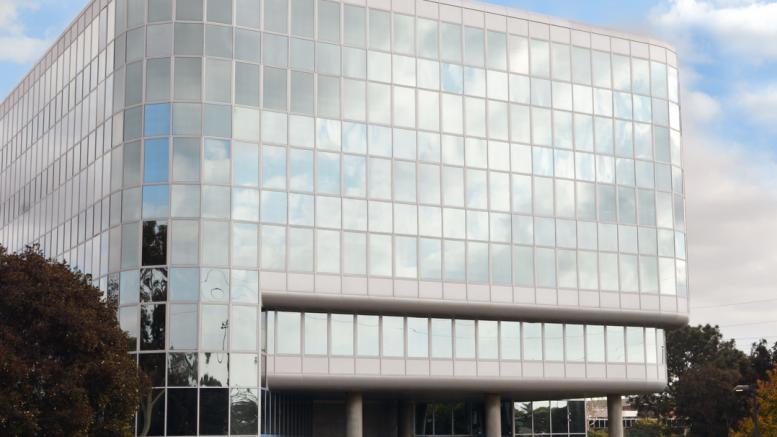 A striking, early example of late modern “high technology” architecture received a 21st century facelift when its aluminum-clad exterior was refinished with NeverFade Metal Restoration Coatings with Kynar Aquatec from APV Engineered Coatings. The coating system restored the building’s façade to a just-like-new condition that will last for 20-plus years.

When it was completed in 1972, the Federal Building in Hawthorne, Calif., served as West Coast headquarters for the Federal Aviation Administration (FAA). The 6-story rectangular building with rounded corners was the first in Southern California to be designed with a mirrored glass “skin,” a design element that would become ubiquitous on corporate architecture of the 1970s and 1980s.

This “skin” includes flat surfaces of extruded anodized aluminum paneling and glass that are wrapped around the building’s concrete structural system, with thin, shallow, reverse mullion profiles to make the curtain wall appear as one continuous surface.

In 2015, the Federal Building was officially listed in the National Register of Historic Places, and soon thereafter, the federal government’s General Services Administration (GSA) decided to sell it. Before the sale was completed, the Los Angeles Conservatory got involved, working closely with the GSA to ensure the building would receive long-term protection through a conservation easement that was placed on the building as a condition of sale. The easement requires that any proposed changes to the exterior of the building and landscape conform to nationally recognized preservation standards.

According to the conservancy, “Often it is a younger generation that sees value in these later, newer buildings that are just emerging as historic landmarks of the future. Now that the 1970s-era built environment is crossing the 50-year threshold, enough time has passed to start understanding, recognizing and protecting these places too.”

Worthe Real Estate Group of Santa Monica, Calif., purchased the property in 2019 and began an extensive interior and exterior rehabilitation.

“We are all very excited to see this building rehabilitated and put back into its original use, demonstrating again how old can indeed become new again,” notes the Conservancy on its web site.

Building restoration and maintenance expert Stuart Dean Co. Inc., took on the assignment of refinishing the building’s 40,000-square-foot Class One clear anodized aluminum exterior from the ground floor to the roof, including all window surrounds, window frames, façade panels, soffit panels and turns. The first order of business was to conduct a full NACE inspection of the façade to better understand its condition and determine the best path for restoration.

Stuart Dean discovered that the building’s façade had been painted several times in the past with a matte, silver-gray aluminum-colored paint—most recently in 1990 and 2009—resulting in a buildup of 8 to 13 mils of previously applied paint. According to Chris Incorvaia, national manager of Façade Restoration, Stuart Dean, the multiple paint layers had degraded and lost their adhesion, leading to widespread delamination and flaking. The damage was so severe that portions of the underlying aluminum substrate were exposed to the elements and subsequently became corroded and pitted.

“The damage was clearly visible at just a casual glance,” Incorvaia says. “We were certain that we would need to remove all the previous paint so that we could properly prepare the surface to ensure good adhesion of the coating system.”

The building’s historical status meant that less aggressive removal processes needed to be applied. To meet these requirements, Stuart Dean proceeded with multi-stage mockups showing the results of various removal methods to determine the most efficient approach.

As part of the mockup process, Stuart Dean also removed metal-to-metal and metal-to-glass sealants from around panels and window frames.

Neff noted that NeverFade Certified Applicators like Stuart Dean go through special training to learn about the chemistry behind the product. They also learn details around pre-job testing, color matching, application mock-ups, on-the-job troubleshooting, and post-installation quality assurance, all providing confidence that NeverFade will perform throughout its 20-plus year lifecycle.

This color-matching is a standard part of the NeverFade offering. APV will custom-match customer color specifications, from whites and metallics, to bold, bright hues.

“APV’s engineering laboratory demonstrated a superior ability to create a pigmented coating that emulated clear anodized aluminum,” says Incorvaia. “That was one of the primary reasons the project was approved and awarded to us.”

NeverFade is versatile because it gives contractors flexibility to apply it by brush, roller or spray. To ensure the metallic aesthetic, the Stuart Dean crew brush-rolled the first layer of NeverFade Topcoat before spray-applying a dusting of the final coat.

At the building owner’s request, Stuart Dean expedited the coating project, manning it with up to 16 technicians at a time to complete the work in five months.

In addition to the surface preparation work and applying primer and topcoat, Stuart Dean also removed 60,000 linear feet of sealants around metal-to-metal and metal-to-glass joints, as well as around gaskets, and replaced them with 100 percent silicone sealants that would allow the new coating to adhere properly and provide a 20- to 30-year service life.

As they did with the mockup process, APV remained fully involved with the application process, making several onsite visits, meeting with the building owner, and conducting a final quality assurance evaluation at the end to support the 15-year product-and-labor guarantee APV provides to building owners. The guarantee, which is transferrable to future building owners, states that if the coating fades by a ?E of five or higher, APV will replace the product and cover the labor cost of re-coating. This warranty is unique to the architectural coatings industry.

“One of the reasons water-based NeverFade is ideal for these field applications is its ultra-low VOC content and lack of nuisance odors,” says Incorvaia. “In fact, it is one of very few high-performance coatings to meet strict SCAQMD Rule 1113 environmental regulations in California. And because we were able to brush-roll the primer and first layer of topcoat, we didn’t have to worry about overspray or windborne spray damaging surrounding cars or buildings.”