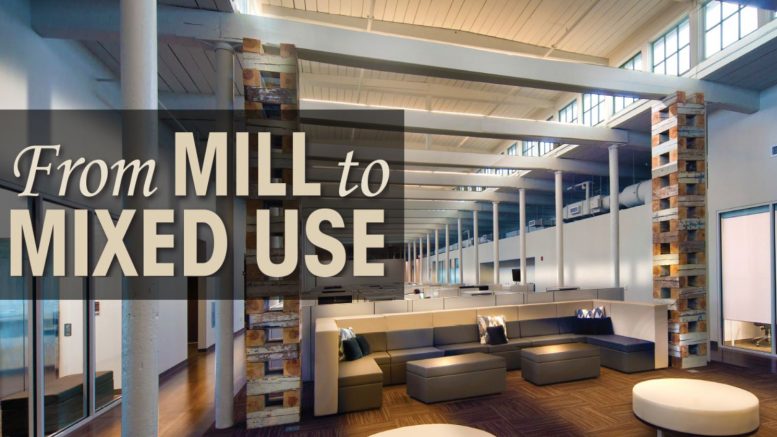 Boasting more than a century of history, the John M. Stone Mill in Starkville, Miss., has housed only two functions since its 1902 opening: The Mississippi
State University (MSU) physical plant occupied its two floors in the late 1990s and, prior to that, the mill produced chambray cotton fabrics, earning it the distinction of being the longest-running mill operation in the U.S.

At the center of commerce during the 1910s and ’20s, the 94,231-square-foot mill spurred construction of housing for the mill workers. Today, those original neighborhoods are known collectively as the Cotton District, a premier student-housing enclave in high demand because of its walkable scale and close proximity to campus.

In 2015, the mill and its 11-acre site were converted into a mixed-use development that includes a state-of-the-art conference center and office suites within the former mill, as well as a 4-story, 105-room Marriott Courtyard hotel and 458-car parking garage that are independent structures on the site. 550 Russell, a new mixed-use development containing condominiums and restaurants, also has been developed on the site. The architectural aesthetic of the new construction was intended to match the era and style of the mill.

Dale Partners Architects P.A. provided master planning and full architectural services for this $55 million project, now known as The Mill at MSU, within a design-build project delivery method. The firm was chosen based on its extensive historic and design-build experience, as well as its team’s ability to design to a budget and produce documents that define design intent in a timely manner.

The impetus for the conversion of the mill was twofold: need and financial feasibility. As the student population continued to skyrocket at MSU, infill campus housing and academic facilities were added, which increased on-campus density. Concurrently, adjacent off-campus sites that were owned by the university, such as the mill’s site, became more desirable. The mill sits on a large tract of land, which was one of the last undeveloped parcels adjacent to the campus boundary, and fronts Russell Street, which is a main connector to campus.

In addition, the ability to assemble funding from federal, state and county governments made the previously unfundable project viable. Federal and state historic tax credits were key, as were funds from 10 other government entities.

To renovate the mill into a functional conference and office center, major changes and additions to the building systems were required. As with all national landmark buildings, extensive coordination with the Mississippi
Department of Archives and History and National Park Service (NPS) was
required to ensure compliance with historic guidelines. Of utmost importance to NPS was that the mill building be viewed as it was in 1902: a building standing alone in a green field. This approach maintained the original view corridors onto the site from the surrounding areas and preserved the overall feel of the original historic context.

The site was subdivided into six distinct parcels, each for a specific new function and shaped to maintain view corridors to the mill. In addition to the mill, these parcels contain the garage, hotel, 550 Russell, and two out-parcels for future development. The planning and design of the entire project was subject to the approval of all stakeholders, including MSU, the city of Starkville and the funding agencies.

The hotel’s site is the most visible and was preferred by Marriott. It made sense to locate the conference center and its 10,000-square-foot ballroom adjacent to the hotel within the mill’s east end. A 1939 fire, which gutted the east end of the mill, erased all original interior building fabric. Generally, wholesale interior demolition within a national-register landmark is strictly forbidden. In this case, the team was able to remove the second floor and gain adequate ceiling height for the ballroom because of that 1939 fire.

To create the ballroom, which can accommodate up to 1,000 people and is used for wedding receptions, conferences and more, the exterior wall was braced and the roof was removed. The second floor over the ballroom area then was painstakingly demolished, piece by piece. The exterior walls were re-braced with steel beams at higher elevations and reroofed. Salvaged materials were reused throughout the project. Of note is a new monumental steel stair, utilizing 200-year-old beams as treads and platforms.

Jeff Barnes, AIA, ASID, NCARB, has been a partner with Dale Partners for more than 10 years. He brings a wide variety of expertise in commercial and hospitality facilities with a particular emphasis on the design, documentation and completion of complex corporate facilities.