The building’s windows had been replaced at some point with inexpensive aluminum windows. To improve energy performance, these were replaced with commercial-grade, low-e, double-glazed aluminum windows. With the expectation that the space would one day be used for athletics, laminated glazing was specified for the interior face to prevent breakage from ball strikes. When the existing windows were removed, it was discovered that the sash weight chambers of the building’s original wood double-hung windows remained, creating a void at the jamb of each window. In the case of some of the paired windows in the classrooms, the sash weight chambers between the windows also showed water damage. Additional wood framing and blocking were required to provide a solid substrate for securing the new windows.

There was also water damage and dry rot throughout the building. Because it was not in the school’s budget to completely replaster the building, strategic repairs were made where water had migrated under the finish and damaged anchors holding the lathe to the siding. Water had also infiltrated the valley where the gable roof meets the towers and had caused significant damage to original structural members that subsequently required replacement. 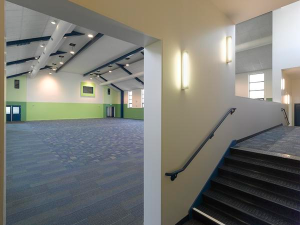 The interior of the renovated building was designed to be flexible with smaller spaces at the rear utilized for temporary classrooms and the large assembly space for more active group uses.

Planning for the Future

The interior of the renovated building was designed to be flexible with smaller spaces at the rear utilized for temporary classrooms and the large assembly space for more active group uses. Restrooms were designed for the initial installation of kindergarten-sized toilets that can be re placed with full-sized toilets as the school’s population expands and grows up. Once the campus is fully redeveloped, temporary classrooms will be converted to a catering kitchen and dining room, and the assembly space will be converted to a multipurpose gym and theater. With this eventual use in mind, the mat slab was depressed to allow for the future installation of a sprung floor. At entrances, the floor was floated to provide a gradual and smooth transition to exterior grade. Modular carpet tile is used throughout the building, to allow for ease of maintenance and to simplify removal when the sprung floor is eventually installed. Acoustical ceiling panels were used in the assembly space for their durability and impact resistance.

Given San Francisco’s temperate climate, a modest and economical approach was taken for the design of the mechanical systems. The temporary classrooms have heating and cooling and the assembly space features operable windows and air-conditioning for a moderate occupant load. The lighting design for the assembly space utilizes a layered strategy with dimmable, high-bay LED downlights and strategically placed directional lighting to illuminate the walls. Classroom lights are linear pendant LED fixtures with an up/down component to ensure all of the surfaces in the room are equally well-lit without distracting scallops on the walls. Conduit and junction boxes are located adjacent to the head of each assembly room window so motorized shades can be installed when the school’s budget allows.

Undertaking the rehabilitation of the parish hall took great vision on the part of the school’s leadership. Transforming it into the Presidio Knolls School Pioneer Hall brings new life to this historic structure and starts another chapter in its long narrative. It will serve the school well as it continues to grow and evolve.

Laura Rambin, AIA, LEED AP BD+C, is a principal at Studio Bondy Architecture, Oakland, Calif., where she focuses on the design of educational spaces.

In Design—and Life—Change Can Be Good