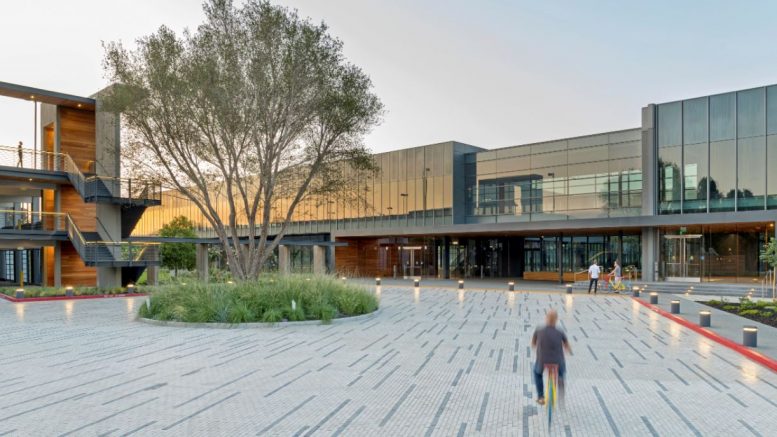 The current hypercompetitive business climate has tech entrepreneurs and startups angling for every advantage— and the right workspace can make all the difference. A former manufacturing building and its sea of parking were relics from 1970s Silicon Valley that needed to be brought into the 21st century to be relevant for today’s generation of tech titans. Instead of demolishing the buildings to construct a formulaic center-core mid-rise, the team at Gensler’s San Francisco office understood its value with high-bay, open spaces and already large floorplates. It was a found object to be improved, not removed.

The repositioning strategy centered around the strengths of the building and its site: creating massive open floors craved by creative companies, expanding outdoor spaces to capitalize on the mild climate and providing the amenities demanded by today’s market. The addition connects to the existing building with two bridges, enclosing a central courtyard and forming the building lobbies off the entry court. Inside, open stairs connect the two levels and invite light into the building; the glazed exterior connects tenants to the larger site. Outside, the team prioritized landscape spaces with the parking pushed to the edges of the site, allowing the garage and addition to work together to define exterior zones for recreation and informal work settings.

By examining the solution holistically from the site level, the design recovers green space and provides outdoor work and social areas while implementing a sustainability strategy attractive to tech clients. The transformation invigorates the site and building to capture the intrinsic value, realizing a bold and successful repositioning vision. In fact, Google took notice and purchased the property prior to completion.