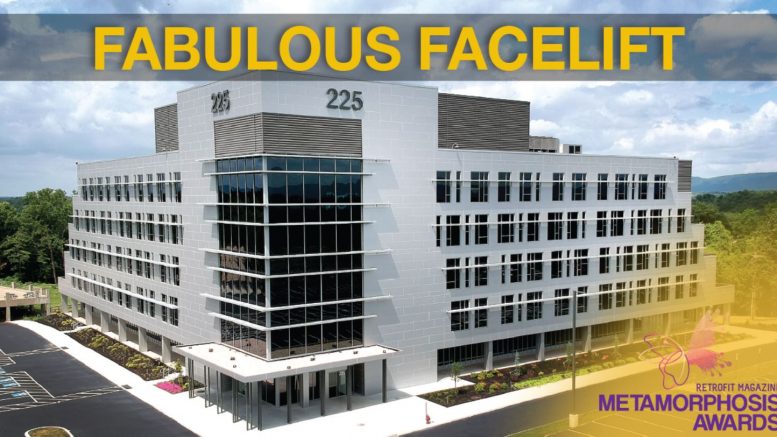 The 1980s were a decade of business growth and advancements in technology. Desktop computers stand out among the life-altering technology developments of the ’80s, and one of the most respected companies offering these new-fangled systems was HewlettPackard. By 1985, HP’s sales had reached $6.5 billion and the company had 85,000 employees, including many in a new 215,532-square-foot monolithic glass building in central Pennsylvania.

The 3-story building and its 6-story addition at 225 Grandview in East Pennsboro Township were composed of a non-thermal aluminum I-beam-framed curtainwall system with reflective vision- and spandrel-glass panels—a common but problematic building technique of the time. Over the years, water penetrated the building because of the absence of a thermal break. High dewpoints resulted in deterioration of most of the light-gauge wall framing weeps and other water-control systems. A lack of maintenance didn’t help matters.

The 2011 Black Monday market crash resulted in massive layoffs at HP and the company vacated 225 Grandview. Select Capital Commercial Properties Inc. purchased the vacant building in 2018, noting its structural strength and its optimal location for Class A multi-tenant office space. The new owner then initiated a design competition, asking entrants for a new façade that was sustainable and energy efficient, as well as met the owner’s budget and strict timeline.

Murray Associates Architects P.C. was awarded the project and not only met the owner’s requirements for 225 Grandview, but also achieved the First Place prize in retrofit’s second-annual Metamorphosis Awards in the Exterior category for the transformational project.

Murray Associates Architects was established in Harrisburg, Pa., in 1935. Throughout its 85-year history, the firm’s talent has witnessed and been part of changes in design styles and technology, embracing challenges and applying their experience to create outstanding buildings.

“Renovations are so complex, we don’t assume anything,” Dubbs says. “If we get drawings of a product, even though they’re as-builts, we still go out and use our 3D scanner. We still point-cloud the entire project. We’ll spend days walking through, making sure the drawings are accurate, because most of the time we find as-built drawings don’t really reflect the actual conditions. We spend a lot of time establishing a very good fundamental base for the product so that we, our client and our consultants can have a productive discussion based on factual information.”

Murray Associates’ strategy certainly assisted with the redevelopment of 225 Grandview. “The week after we were awarded the commission, we started on a lot of exterior and interior renderings,” Dubbs recalls. “We did interior views of people at different office layouts, also open-plan areas; we wanted to give the owner a sense of what the building looks like from the outside and what it looks and feels like on the inside. We did daytime, evening and night renderings because buildings in Pennsylvania come alive at night. We want owners to be proud of their space, and that sets a tone for tenants’ corporate culture in a building.”

The retrofit performance requirements included a maximum U-factor of 0.38 for the curtainwalls/window walls, a maximum solar heat-gain coefficient of 0.39, an air infiltration rate limited to 0.06 cubic foot per minute per square foot at 1.57 pounds per square foot and visible transmittance of 0.429.

In addition to creating a high-performance façade, Murray Associates Architects sought to modernize the building’s appearance by updating the entrances, lobby, roof, and overall lighting and security. Utilizing the maximum amount of exterior glass possible while synchronizing with the interior structural columns and supporting the tenant office floor plans was another main design criterion. Four different façade concepts were designed and evaluated to assist the owner’s final decision.

“The differences in concepts were the openings in the façade,” Dubbs explains. “Really important in terms of choosing a façade were the heights of windows, the rhythm of the windows and the scale of those openings, so that’s what really changed on the different design options.”

ALL ABOUT THE GLASS

Special considerations were taken to select the proper curtainwall, glazing and high-performance shading systems in regard to solar heat gain, R- and U-value, bird protection, transparency and maximizing daylighting to each floor while maintaining the current net-rentable floor area that would visually entice large regional tenants.

The final design provides 63 percent glass area on the exterior. “We wanted to get as much opening in the façade as possible and we used a very high-quality glass,” Dubbs notes. “Numerous studies attest to the importance and benefits of natural light on workplace productivity and the psychological well-being of employees.”

Several different types of glass were installed depending on the location of the glass on the building. Each type was selected to achieve a high-performance building envelope that was aesthetically pleasing and cost-effective. For example, a gray-tinted glass was installed facing south and east—areas that receive a lot of direct sun. Above the sunshade in those areas, a gray-dot fritted pattern covers about 25 percent of the surface of the glass.

“The frit is our solar shading,” Dubbs states. “It’s a good energy tool because we’re stopping the solar gain at the face of the glass. We did not want someone to have to install blinds on those windows; once the heat gets to the glass and goes through the glass, the heat is now in the building and the HVAC system has to overcome that solar gain. Keeping that heat out allows us to reduce the size of the HVAC systems, which means we can have smaller duct sizes and higher ceilings.”

Meanwhile, on the building’s north side, clear glass was installed because the façade of the building does not receive as much solar gain.

“The different glasses are based on some energy modeling and solar studies we did to ensure we were spending the client’s money wisely,” Dubbs adds. “When you start to use high-performance glass, it gets a little more expensive, so we wanted to use the more expensive glass on the façade where it would have the most impact on the energy usage. It was also about creating a pleasant working environment; when someone walks up to the gray-tinted glass below the sunshade on a sunny day, it’s comfortable for them.”

Dubbs underscores the importance of ensuring the new glass does not resemble the monolithic look of the 1980s. “As architects, we do buildings for humans and we really designed this building based on human scale and that sense of someone looking out the window,” Dubbs says. “If you open up your door to your office, you’re looking right outside. The visual connection between the office space and the outdoor space is seamless, so I really think it grounds the spaces. It really gives this building a very different feel when you’re inside.”

The building’s new owner had an extremely tight timeline for the design team and construction crew. Dubbs says only three months passed from the time his team won the contract until construction began on the façade.

Fortunately, Dubbs’ team already had spent a great deal of time on the initial submission to win the project. “We worked with the owner to refine the module knowing that in central Pennsylvania a typical office will be within a certain size range. Our design incorporates an asymmetrical rhythm of windows so that we could hit walls and still produce either a rectilinear office or workspace that was perpendicular to or aligned with the façade,” he explains.

Another way to meet the tight schedule was to specify a panelized system in which the new cladding was made in a nearby controlled environment with strict quality assurance. The installation team literally could follow on the heels of the demolition crew as they dismantled the existing building down to its structural framing. Spray foam was applied, followed by a universal barrier wall solution which was covered by aluminum composite material (ACM) panels. The exterior wall assembly has an insulation value of R-21.6 while the roof’s insulation achieves R-40. Dubbs’ team chose a light silver ACM for the walls with a 30-year finish to visually lighten the building and juxtapose the gray glass.

“There’s a subtle elegance to the façade because the windows are pushed back a bit, the silver is out front and the sunshade provides some subtle movement, if you will,” Dubbs adds.

Dubbs likes that the ACM panels come in large formats for fewer joints and less waste. “We developed a very rigid module with the local panel manufacturers,” he recalls. “The ACM allows us to wrap the module and get clean joints with a tapered seal that is weathertight.”

To complete the exterior transformation, the previously small, almost unrecognizable, entrance was moved out from a corner of the building. The new main entrance features a canopy that identifies it to building visitors.

Synthetic turf was installed on top of the roof membrane on the 3-story part of the building. It allows tenants above the roof to look out over a “green” roof. It also eliminates the heat-island effect that would be adjacent to the façade. “That turf will extend the life of the membrane roofing by maybe 25 to 30 percent because the EPDM roofing is not being deteriorated from UV,” Dubbs says.

225 Grandview opened for leasing in fall 2019, and when potential tenants visit the building, they often mistake it for new construction. “We are very proud that someone would look at the building and think it is new construction,” Dubbs says. “But we’re even prouder that we were able to avoid the carbon footprint of a new building. We saved so much by putting a new skin on the building and keeping the floors the way they were. Plus, we recycled all the aluminum curtainwall and all the glass from demolition. It is a very sustainable building in terms of the way the demolition and new construction were handled.”

Dubbs believes 225 Grandview demonstrates the possibilities that can be created from an existing building of a bygone era. “Here’s a 215,000-squarefoot building that is no longer of the ’80s. It’s of 2020. It’s beautiful. It’s modern. It really has a timeless appearance now,” he states. “We think renovating millions and millions of square feet nationally is a better way to go than new construction. It’s a matter of using creativity to appreciate, study and use its structural and aesthetic bones to make it the very best building it can be for the next half a century or more.”