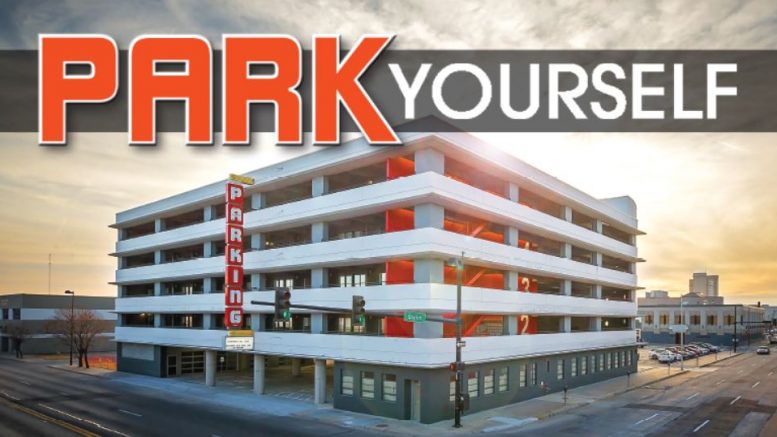 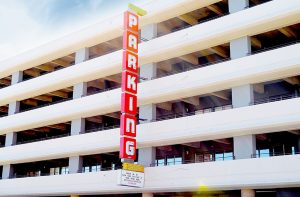 Listed on the National Register of Historic Places in 2016, Broadway Autopark (originally called Knightley’s Parking Garage and built in 1949) has been reimagined and repurposed from its original heritage as a 500-car parking garage into a 44-unit, trendy, urban, residential and commercial complex—becoming a community asset to downtown Wichita.

Farha Construction Inc., which was the contractor on this project, now leases the office space on Broadway Autopark’s ground floor. The next four levels are one-bedroom apartments. Residents get the best of both worlds: covered and secure parking directly in front of their door, plus the convenience of living downtown. Each unit is a modern, industrial, open-concept living space with amenities any urban dweller would desire. 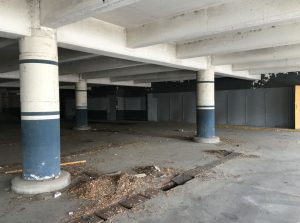 The renovations took a little more than two years to complete.

The arrival of the automobile in the first decade of the 20th century played a significant role in Wichita’s growth. By 1923, one in five Wichita residents owned an auto, making downtown congestion and parking top concerns for city leaders. With its diversified industrial economy, Wichita weathered the Great Depression and WWII. Following the war, its population returned to wartime highs and the city nearly doubled in size. The post-war growth heightened the struggle between needing cars to bring people to shop and work downtown without overburdening city streets.

Local oilman D.R. Lauck realized the multi-level parking garage could address the challenge of congestion by removing parked vehicles from busy streets and making efficient use of downtown real estate. Upon opening in March 1950, Knightley’s Parking Garage was proclaimed as a civic and commercial asset to Wichita, providing a much-needed service to downtown businesses and customers: the ability to park and shop or work in close proximity to the destination. The garage is a rare surviving example of a post-war, privately owned and attendant-operated garage, in contrast to self-park garages that became dominant in the 1950s. A dual-function facility, the garage also served as the offices of Lauck Oil Co. for more than 25 years.

Knightley’s Parking Garage also is an excellent representative of the multi-story parking garage, a unique Modern building type characterized by its open-air design, its concrete construction and its minimalist exposed skeletal structure distinguished by horizontal banding. The garage featured parking on the roof deck, a novelty for the city. Other distinguishing features were its twin spiral ramps, porthole windows, integral flared canopies at the perimeter rail and the 4-story neon “PARKING” sign on the Broadway façade. Incorporating the latest advances in concrete construction, Wichita’s largest parking garage (at the time of construction) reflects the convergence of architecture and engineering in a modern building form. The garage featured twin spiral towers and porthole windows and had the capacity to hold 500 cars. All these unique features remain, including the manlift that allowed parking attendants to move themselves between floors. Although, no longer functional, the manlift remains as an artistic and aesthetic part of the building.

In the 1950s, wealthy Wichitans would drop their cars off with a valet at the garage before going shopping downtown. As customers shopped, downtown merchants would ship their purchases to Knightley’s Parking Garage. An advertisement of the grand opening of Knightley’s Parking Garage in 1950 announced an air-conditioned waiting room, restrooms and parcel storage. There was also a safe used to guard valuable purchases.

The garage was open 24/7, 365 days a year until the early 1980s when it closed because there no longer was demand for valet parking services. The building owner unsuccessfully tried to make conversions so the garage would be self-parking; however, the facility sat vacant and trash-filled for the next few decades until Bokeh Development acquired the building in 2016. The garage was in rough shape—not structurally but cosmetically. There was trash everywhere and graffiti all over the walls.

After it was listed on the National Register of Historic Places, the renovations began. Inside the office area, crews found parking tickets they estimated had been on the ground 30-plus years. The renovations took a little more than two years to complete. 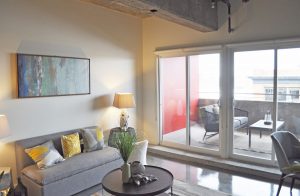 Each one-bedroom apartment, which ranges in size from 650 to 670 square feet, features polished concrete floors and concrete walls.

The Creativity of Constraints

For most professions, the idea of “constraints” would have a negative connotation. In the world of architecture, however, constraints often become the vehicle for discovery. Knightley’s Parking Garage had its fair share of constraints to design around.

The building was listed on the state and national historic registries, both of which enforce strict renovation and preservation requirements for historic buildings. Pair that with the constraints from the International Building Code when changing occupancy type—from an open-air parking structure to an R-2 residential occupancy building type—as well as getting local city plan review to buy off on an unprecedented project, you end up with a seemingly uphill design battle. To top it off, this poured in-place concrete bunker offered very little vision for a viable place to live. The optical illusion of deep concrete beams, wide columns and limited height floor-to-floor was enough to scare off other interested parties during the last decade.

What resulted from all the barriers and red tape was a very obvious solution to developers and architects: shotgun living units with deep covered patios that preserve historic sightlines, as well as extend the living space from the inside out. Exterior elevations were demolished to maintain an open-air parking garage while increasing the amount of southern natural lighting, adding the feeling of security and transparency. Design is more often a discovery of something that seems already there rather than the creation of something new. Broadway Autopark certainly offered a lot to “be discovered.”

Daniel Gensch is a project architect at Shelden Architecture Inc., Wichita, Kan. For Gensch, there’s a purpose for everything and everyone. We all have potential; it’s a matter of unlocking that embedded potential.