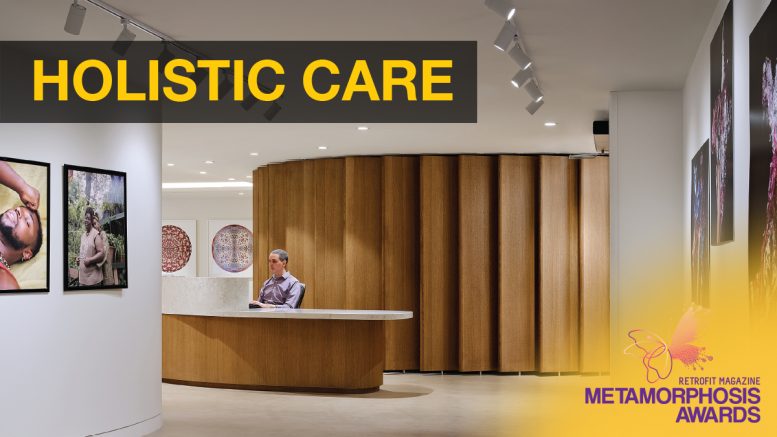 HQ Toronto, a spinoff of the Ontario HIV Network, is a new and innovative health-care facility born to provide specialized care to an underserved segment of the population, gay men. Although Toronto is one of the world centers of gay culture, health-care facilities geared toward this specific segment of the population were lacking. Therefore, the Ontario HIV Network set out to create a new inclusive facility where every male was welcome.

“At first the Ontario HIV Network envisioned a health-care facility that was mostly clinical
in nature,” says Oliver Beck, principal of the Toronto-based architecture firm, Architecture Counsel Inc. “But early in the process of working with the stakeholders, a bigger need was identified for a broader holistic style of care. The idea became treating the mind, as well as the body.”

Beck, a specialist in pre-design documentation and schematic programming, led the Ontario HIV Network in an eight-month design phase that involved as many as 17 stakeholder organizations that provided input. “When we started with this project it was titled a gay men’s health clinic; that’s how we had it listed in our server,” he recalls. “And everyone was uncomfortable at first. Employees and consultants asked if that was a proper name. Ultimately, the goal here was to redefine what gay men’s health care means.”

Once the programming stage of design was wrapping up, a location was needed to put it all together. A prominent historical building one block from the epicenter of Toronto’s gay culture seemed a good fit. 790 Bay Street is a modernist building built in 1959 and designed by the celebrated Toronto architect, Peter Dickinson. The Women’s Health College purchased the distressed office building in the early 1980s and created what is still believed to be the largest clinical health-care building in Canada. A 9,000-square-foot vacant space on the eighth floor was to become HQ Toronto’s home. Beck describes the rigid rectilinear white box space as a “forest of columns”.

According to Beck, the design process was a long conversation with the organization to understand everything the facility needed to offer. Flexible spaces were required that could accommodate a range of activities—from clinical rooms to one-on-one counseling and group activities. “It may have ended up being a rectilinear drywall maze if our firm hadn’t been able to have these early, rigorous discussions with the client,” Beck remarks.

The architects were challenged to take a rectilinear space and create a free-flowing area with natural light penetrating deep within. One of the design cues that Beck drew from was Woodland Art, a regional art style made famous by the works of Norval Morrisseau, an Indigenous Canadian artist. His artwork inspired the shapes of the spaces, particularly the consultation rooms in the entry area that take on a bird’s eye look in plan and are shaped by the custom-made stained white oak fins that give a sense of flow and direction to the entry. The wood’s warm tones provide visual punctuation to the interior’s mostly neutral color palette.

The existing structure was a challenge to the design team. “We had to figure out what to do
to hide all the structural columns,” Beck recalls. “With well thought-out planning of wall and element placement, we were able to visually hide almost every column. If you look at the space now, you don’t even notice them.”

The interior design is subtle. Neutral walls, ceilings and floors act as canvases for the artwork on display. Throughout HQ Toronto, the art displays enliven the space. All the art pieces are a celebration of gay culture and rotate at various times of the year, bringing a fresh look with every new installation. “You won’t find brightly colored accent walls and splashy colors. The intent was to let the art pieces speak for themselves,” Beck explains.

From the onset, one of the design’s central themes was the idea of including the Indigenous, or First Nations, culture, a group that has historically lacked resources for health care. “One of the wishes of the stakeholders was to have the ability to perform smudging ceremonies [which involve the burning of sacred herbs], an integral part of the Indigenous culture for spiritual cleansing,” Beck says. “It’s rare to have the ability to perform smudging in one space. HQ Toronto was designed o have three separate spaces where the ceremonies can be performed. As you might imagine, it’s taxing on the HVAC system to have that ability, especially from a fresh-air standpoint”.

The existing building suffers from undersized HVAC systems. Duct size and minimum ceiling heights became a driving factor in the design. According to Beck, it took an immense coordination effort to make the ductwork details work out.

In addition to providing health care, the capabilities of HQ Toronto’s clinical lab are impressive. This is one of the only clinics in the world that can perform rapid HIV testing, which takes specialized equipment and technology. A patient can receive results in as little as 24 hours. “One of the most agonizing things if you suspect you may have contracted HIV is waiting for lab results,” Beck notes. “Traditionally HIV testing results can take two to three weeks to receive. With the capabili- ties of this lab, a patient knows within 24 hours, which spares them weeks of agony.”

A NEW FORM OF CARE

For Beck, the most rewarding aspect of the design was creating an entirely new program of holistic health care for the GBTQ community that didn’t exist before. Beck comments that taking a mundane rectilinear existing space and creating something new and interesting provided a great sense of accomplishment.

“Overall the design and construction process went fairly smoothly,” he says. “We had a good client that was good at being a listener and asked all the right questions.”

When asked about the construction schedule, Beck notes that it took 18 months to complete the construction. “We could have easily shaved six months off the schedule, but construction took place during the height of the COVID-19 pandemic. As it did most everywhere at that time, construction came to a grinding halt while everyone figured out how to navigate the pandemic.”

Prior to the creation of this facility, Toronto was one of the only major North American cities with a large GBTQ population that did not have an integrated health center to serve its community. Now Toronto joins the ranks of San Francisco, Boston and London as a leader in this new model of holistic and inclusionary care.

Be the first to comment on "A 9,000-square-foot Rectilinear Box within a Modernist Building Is Transformed into a Calming Space for Toronto’s GBTQ Community"