As a first step toward making the Empire State Building energy efficient, Rode and the rest of the efficiency dream team looked for places in which load reductions could be achieved. “Before retrofitting or tuning a cooling plant, you must ensure you reduce the amount of cooling so you’re not setting the plant up for the wrong loads,” Rode says. “We needed to make the building envelope better in terms of insulation value and solar heat gain. Windows were an obvious consideration.” 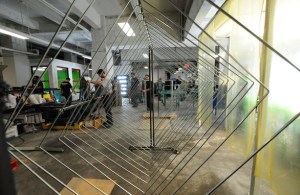 Because the Empire State Building was about to become a world-famous sustainability project, the team kept a close eye on reusing materials and equipment before buying new. The building’s 6,514 existing windows had been installed just 14 years previously. Although they were composed of tempered double-pane glass, the gas that had existed in the evacuated space between the panes had broken down, so the insulation value was lost.

The aptly named provocateur, Rocky Mountain Institute, suggested rebuilding the existing windows onsite by adding a solar film and inert gas between the panes. The team further developed the concept and decided to follow through.

Working in occupied spaces in which tenants pay an average rent of $40 per square foot, according to 2011 SEC Filings by Empire State Building Associates LLC, requires succinct scheduling and a choreographed procedure. “This was a pretty invasive project, and we couldn’t have tenants affected at all,” Rode recalls. “You just don’t take their windows out and put new windows in because even if a paper is blown off a desk the wrong way, it’s a problem.”

Rode adds the procedure was practiced many times before actual work began. “You don’t do a job like this unless you practice every aspect of it like a military operation,” he says. “By the time we started, we had made mockups and sat down with the union guys, and talked about the best way to take the windows out and put them in. There were countless quality runs to ensure we had the process ready—no bubbles in the film, etc. It was well vetted. There were no surprises.” 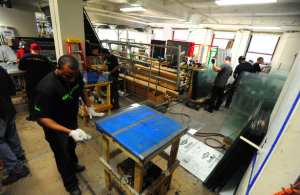 After the window frames were pulled apart and the gaskets were scraped off, the glass was cleaned and inspected. Then a new window unit was assembled with a clear aluminum solar film suspended in the
middle of the two panes of glass. An argon/krypton gas also was blown in. Photo: Johnson Controls

Each night, Serious Energy, a division of Sunnyvale, Calif.- based Serious Materials, would remove 50 to 100 existing windows and replace them with new windows. The existing windows then would be transported to the fifth floor of the Empire State Building where a soundproof window refurbishment shop had been created. During the day, a crew of Serious Materials employees operated the machinery that assisted in rebuilding the windows.

First, the window frames were pulled apart and the gaskets were scraped off the glass. The glass was cleaned and inspected. Then a new window unit was assembled in which a clear aluminum solar film, manufactured by Serious Materials, was suspended in the middle of the two panes of glass. An argon/krypton gas also was blown in. The solar film and inert gas increase the windows’ R-value to between 6 and 8 and achieve a heat-gain coefficient of approximately 0.5.

“The glass was switched around so the outside face of the pane was now the inside face to mitigate the weathering of the glass,” Rode says. “Technically the windows now are triple glazed: two panes of glass and one pane that is really the film.”

ESCOs Are Positioned to Lead the Market for Energy-efficiency Retrofits