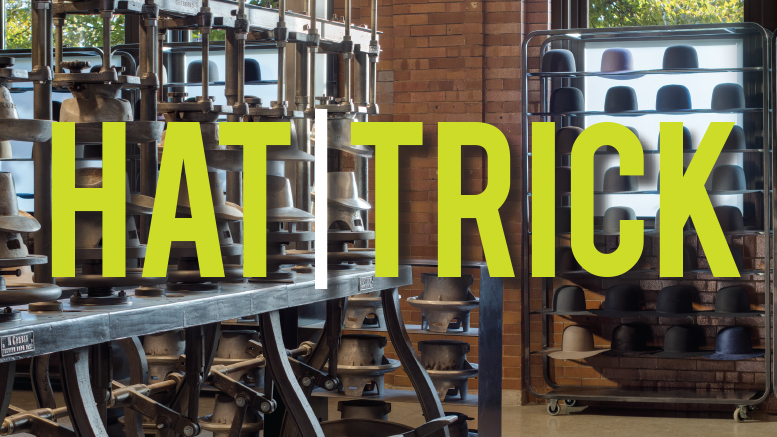 In the first half of the 20th century, hats were a staple of men’s fashion. Young or old, rich or poor, few self-respecting men would walk out in public without their trusty fedora, bowler or newsboy cap.

Today, hats are making a big comeback, and there is nostalgia for the look and quality that came from the craftsmen of days gone by. A well-made hat is more than just an accessory; it’s a statement and reflection of the individuality of its wearer.

There may be no greater advocate for the artistry of high-quality hats than Graham Thompson. He is the owner and founder of Chicago-based Optimo, a maker of fine hats for the past two decades. Thompson studied under a great old-time hat maker on the South Side of Chicago before carrying on the tradition with his own company.

Optimo has long displayed and sold its hats in a storefront in the classic Monadnock Building in downtown Chicago and manufactured them in a workshop in the South Side neighborhood of Beverly. As the reputation of Optimo hats grew, it became apparent the company would need to expand its operations.

Thompson and most of his small group of employees all had ties to the South Side, so he wanted to keep making his products in the neighborhood where it all began. He was able to work with the community of Beverly and participate in a community development program through the city of Chicago. The program enabled him to purchase an old firehouse building for $1, under the condition that he would renovate it and do business in the community.

Originally built in 1914, the building is one of the oldest remaining firehouses in Chicago. It would prove to be a perfect fit for a hat maker that draws so much inspiration from the past. To tackle the renovation, Optimo turned to the architects at Skidmore, Owings & Merrill in Chicago.

“The scale of this was much smaller than anything we normally do,” says Brian Lee, FAIA, LEED AP, design partner with Skidmore, Owings & Merrill. “But having visited the shop and having met Graham, I was struck by how passionate he was about architecture and design and how it related to his product. He wanted to connect the environment with his operations, in terms of a total design. That intrigued us.”

The design team took time to understand Optimo’s production process in an effort to marry form and function in the new building. The company has hundreds of wood and metal forms and a mix of old and new equipment, some of which is more than a half-century old. The goal was to create a small manufacturing facility combined with show and retail space and to do it in way that mirrors the men’s fashion aesthetic that Optimo represents.

“We tried to think about the workflow and production line to find ways to make the process more efficient and integrate all the equipment in a way that effectively uses power, steam and air,” Lee says. “Fortunately, we were doing this in a space that had really good bones. The old fire station had a high-bay vehicle space and some support spaces along the side. It also has an upper floor that Thompson wanted to use to create a studio salon for customers.”

The floors and walls were redone, and new windows and plumbing were installed. An upgraded HVAC system was added, using strategically placed indoor cooling units connected to roof-mounted multi-zone split system units. Radiant floor heating also was utilized. The stairs were rebuilt in wrought iron with an oak railing. With all the big changes, there was still a strong sense of staying true to the original firehouse.

“We looked at old photographs, and the building plan is pretty much intact,” Lee explains. “We were interested in creating a sort of holistic design that matched the hat aesthetic to the architecture of the place. There was a sense of craftsmanship in the existing building. We tied the look of the wood trim to the work surfaces and old cast iron machines. All around, old is sprinkled in with new. We tried to give dignity to everything.”

The large garage doors were replaced with new 13-foot-tall doors clad in a bronze alloy. They will turn a patina green over time and are already beginning to turn. Even in places where things had to change, there was an effort to respect and reuse as much as possible from the original building.