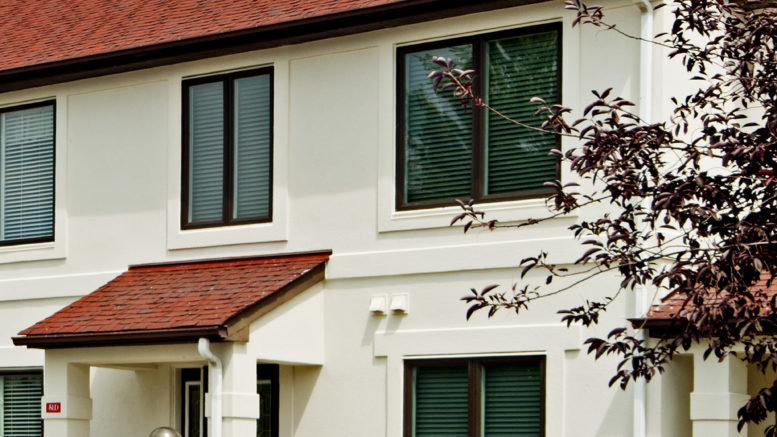 The buildings that compose Queen’s Landing were built by five different contractors during a 15-year span.

Queen’s Landing, a condominium community on Kent Island in Chester, Md., was in need of significant repair. According to Rob Aird, president of Robert A. Aird Inc., a building enclosure contracting company, the job was unique for several reasons. The setting is gorgeous with a 6-plus-mile view of the Chester River. In addition, Queen’s Landing was built by five different contractors during a 15-year span, 10 to 25 years ago, meaning all the buildings are different. 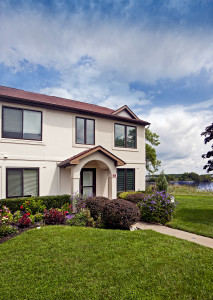 Some of the buildings are EIFS (Exterior Insulation and Finish Systems) with no secondary water/air management and some are a hybrid stucco system, employing brown board gypsum sheathing over wood framing, 3/4-inch-thick EPS overlaid with chicken wire (stucco mesh), which was stapled through the EPS and into the sheathing (with no secondary water barrier), vinyl beads (which may not yet have had the UV protectors), about 3/8 inch of stucco with a gross skip trowel texture and paint.

It would have been tempting to take a broad brush approach to the repairs because, at first glance, the buildings appear similar. However, each building was its own little project, according to Chris Carlson, chief structural engineer with Engineering and Technical Consultants (ETC). “There are different details from building to building,” Carlson says. “All nuances became clearer when we were stripping the buildings.”

Before any work began, the team built a mockup on site that showed what was going to be done and to helped visualize what the community would look like when completed. The mockup is freestanding and includes framing and sheathing, StoGuard (air/moisture barrier) and Sto EIFS, head and sill pan flashings, step flashings, base of wall detailing, caulk and all the components anticipated for use on the buildings.

Carlson and the team at ETC, including two staff engineers that performed all of the field inspections, Cassie Thompson and Alicia Afroilan, were brought in to design all of the repair work, specify the products, and complete the construction administration and oversight. Some of the challenges of this project have been the wood-framed buildings where the wood is deteriorating, according to Carlson. “And one of our biggest surprises was the chimneys,” Carlson adds. “A few chimneys needed to be completely demolished and replaced, and we weren’t expecting that.”

“Some of the areas we had cut into were in good shape and others are in deplorable shape with rotten framing and sheathing,” Aird notes. “Thankfully, the industry has matured and benefited by now having options for substrate protection, air barriers and drainable systems.”

Aird says some of the damage was caused by improper maintenance and repair of the building exteriors—EIFS, roofing, caulk, gutters and downspouts, landscaping, etc. There were water intrusion problems that really played into the decay of the buildings.

The team used StoTherm NExT to replace the current EIFS. This includes StoGuard, a fluid-applied waterproofing air barrier. This water-resistive air barrier inhibits any water intrusion into the building while the notched adhesive on the backside of the EPS permits drainage of any incidental moisture that might get behind the expanded polystyrene beadboard. These components create a high-performing energy-efficient wall cladding system. To replace the stucco, the team used StoPowerwall NExT, Sto’s stucco system that also combines a fluid-applied air barrier. On the stucco buildings, because of funds, the team is removing and replacing areas that are damaged or deteriorated, instead of doing a complete tear-off and replacement of the exterior cladding. For the buildings that had EIFS, nearly all was removed and replaced. 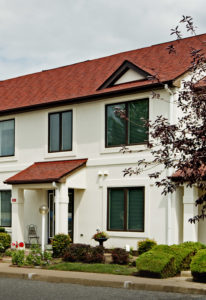 The buildings that compose Queen’s Landing were built by five different contractors during a 15-year span.

In addition to the new cladding, many windows were scheduled for replacement. ETC performed scans of the building facades with a thermal camera to help identify which windows needed to be replaced and which needed sealing. As many as 1,200 windows are being replaced in the units, also helping to make the building more energy efficient. Other improvements include repairing areas on the shingle roofs, downspouts and gutters, and repairing of roof flashings.

The condominium association, especially the board of directors, and an ad hoc construction manager and building captains, have been very supportive and forthcoming, according to Aird and Carlson. The board of directors for the association has been active throughout the program. Bill Moseley, a resident in Queen’s Landing, stepped up and has helped manage the job with the unit owners. He recruited building captains to act as liaisons between the building specialists and the unit owners. The building captains keep the keys to all of the units in their building so the units are available to workers if the residents are not there.

At first people were not happy as the crews took the first building down to the bare structure to see where the real problems were; however, since Phase 1 has been completed, people marveled at how beautiful the building looks and have nothing but compliments for the builders. “The buildings in Phase 1, now completed, just seem to radiate; they are so bright and clean looking, one would think they were just newly built,” says Donna Landis, an owner and member of the board of directors.

“This is a great team working on this project who I personally enjoy working with—both onsite and in their office,” Moseley adds. “We could not be happier.”

This four-year project has been interesting for the residents. The first part of the community was built in the early 1980s and the last buildings were built in 1993-96 for a total of 44 buildings. The smallest buildings have four units and the largest have 10. They are 1- to 3-stories high, depending on the unit. According to Moseley, a recent resident, and Landis, who has been a resident since 2004, approximately 50 percent of the units have full-time residents. About 25 percent are renters and the rest are used as second homes. The location, between Baltimore and Washington, D.C., is a perfect place for retirees who have grown children in the area.

Moseley and Landis’ building has been completed with the StoTherm NExT, and all of the windows were replaced. According to Moseley, they’ve noticed a tremendous difference in sound transmission from the outside to the inside. Landis has reported her energy bill has decreased by more than $100.

“They have done an excellent job repairing and restoring the buildings, starting with those with the worst damage,” Moseley says. “The sealing around the existing windows, reworking the structure of the windows, and sealing with the EIFS has made a tremendous improvement, both day and night.”

Not only are the residents noticing a difference in their sound and energy savings, they also believe these improvements will help in the value of the community with increased sales prices in these tough economic times. This has already been demonstrated by home sales in Queen’s Landing being on the market for the shortest number of days when compared to surrounding condo communities during the past year. The residents pay assessments each year for the four-year project, so expenses will go down when the project is completed.

“We’ve also been able to handle other maintenance issues during this time,” Moseley notes. “For example, when the cladding was off, we replaced the old faucets outside.”

According to Landis and Moseley, this was a major project and has been the topic of conversation in the community. They regularly hold town hall meetings to bring everyone up-to-date on the status. While many of the buildings are yet to be completed, residents of those which have been completed seem pleased with the outcome.

In addition, the restored buildings weathered Superstorm Sandy without a leak.