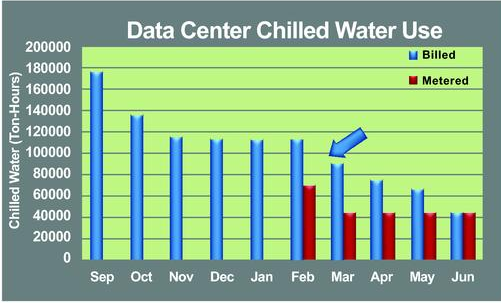 Data centers are prime targets for energy-efficiency retrofits. They are very energy-intensive spaces with power consumption of up to 60 watts per square foot compared to 5 watts per square foot for a typical office building. In addition, data centers do not shut down at night or on weekends like other spaces. Finally, supporting mechanical and electrical systems are often overlooked and aren’t optimized for the current load in the space.

A 6,000-square-foot data center for an international law firm located in Chicago’s Loop recently was the subject of a thoughtful energy efficiency project. The data center, which takes up nearly one half of an entire floor within a 60-story office building, had an information-technology (IT) load of more than 200,000 watts and a total electric load of more than 450,000 W. In early 2011, the firm’s Infrastructure & Operations Group (IOG), which is comprised of IT and operations professionals, began the process of investigating how to make this large data center more energy efficient. The impetus for investigating energy savings came from a cursory analysis of the utility bills from the HVAC equipment manufacturer and a local IT vendor. To confirm their findings, the firm’s IOG team leader invited Shorewood, Ill.-based Hawkeye Energy Solutions, a local energy-management company, to take a closer look at the data-center operations.

After confirmation that the data center was inefficient and could be greatly improved, an aggressive multi-part plan was set in motion. The plan included installing a system to monitor main electrical use and main chilled-water energy use for the data center, as well as component energy use for the computer room air-handling (CRAH) units and IT equipment. The plan also included upgrading the cooling system with variable speed drives and new controls, as well as merging two existing uninterruptible power supply (UPS) systems. In 2012, the plan finally came together and became a project. 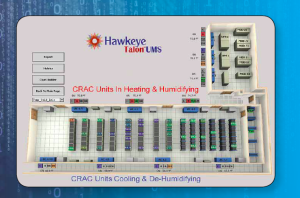 The project’s first step involved investigating possible utility-company incentives to help offset costs and improve the return on investment. The law firm worked with the local power utility, Chicago-based Commonwealth Edison. The project qualified for ComEd’s Smart Ideas for your Business incentive program, which provides funding for energy-efficiency upgrades. The incentives were calculated before any changes were made to the data center. Ultimately, the incentives were a major factor in the law firm’s decision to execute the project.

The second step in the project was to review, meter and monitor the existing data center systems to clearly understand how and where the data center was using energy. Hawkeye Energy Solutions provides packaged sub-metering, monitoring and control solutions specifically designed to reduce energy and utility operating costs. The firm completed a comprehensive engineering review of the data center, including the UPS systems, supplementary building HVAC systems and the building chilled-water plant.

Ten Reasons Your Building Can Benefit from Creating a Rooftop Farm

Be the first to comment on "A Data Center Is On Track to Reduce Its Annual Energy Consumption by 1,616,411 Kilowatt Hours"