The fourth and final step addressed the inefficiency of the two existing UPS systems. One system served the data center and the other served the IT closets on 27 occupied floors of the downtown office building. UPS systems continually convert power from alternating current (AC) to direct current and then back to AC before supplying the IT equipment. This conversion process was very inefficient because the size and design of the systems did not match the power load for the space. 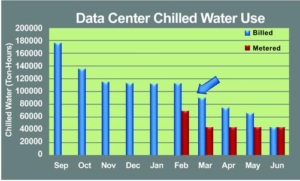 Most existing data centers are over-designed because of plans for future expansion that never happen, improvement in newer IT equipment efficiency and the general industry trend to consolidate operations. In this case, as much as 25 percent of the incoming power was wasted
because of the data center’s over-designed UPS systems. To fix this problem, the entire UPS load was consolidated into one system, resulting in increased efficiency and much lower maintenance costs. Lastly, because the two UPS systems each had three independent modules and the load in the space only needed one module to operate, there was no sacrifice to redundancy.

The project, which took more than five months to complete, was finalized in June 2012. The data-center upgrades are expected to result in annual savings of 1,616,411 kWh. This is equivalent to operating more than 100 average residential homes for one year or the removal of 1,115 metric tons of carbon dioxide from the atmosphere. The operating cost savings are from reduced direct-power consumption and chilled-water usage.

In addition, the consolidation of the UPS systems will directly reduce annual maintenance costs by almost $50,000 per year. With less CRAH units operating at much lower speed, maintenance costs for these units also will be reduced, equipment life span will be increased and there now is reliable cooling-system redundancy.

The utility metering and monitoring system will continuously watch for peaks and valleys in power usage. If, for any reason, the system power usage rises above its newly reduced baseline, the system will automatically send email alerts to the IOG director and his staff so they promptly can address the issues as they happen and before they create significant expenses. The system will ensure that the law firm realizes energy savings for years to come.

retrofit’s Inaugural Conference Is a Success

Be the first to comment on "A Data Center Is On Track to Reduce Its Annual Energy Consumption by 1,616,411 Kilowatt Hours"