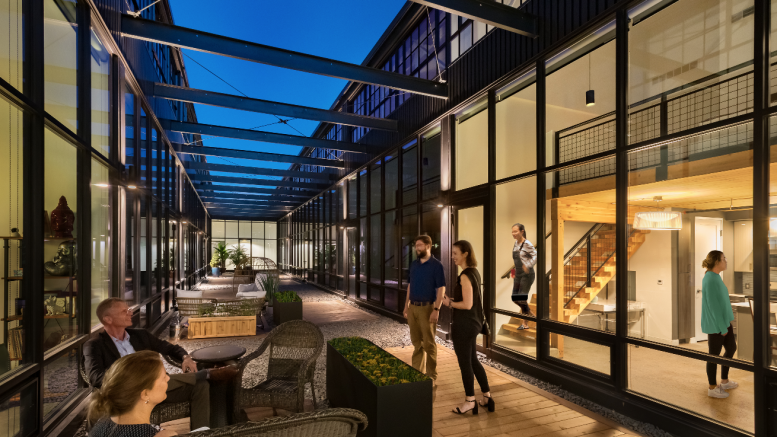 The sweeping south façade created a monumental presence against the freight rail lines, a spur of which played a large role in the placement of shipping for the new factory. Corporate offices and lithography spaces were housed in the east-facing brick “head house,” demonstrating the building’s versatility with an industrial and commercial presence. The building was still considered fully modern as late as 1959 when Woodward & Tiernan Printing was absorbed for expansion specifically because of its “modern plant.”

By the late 20th century, the building’s presence and use had shifted dramatically. For more than 30 years, packing materials were stored and shipped from a loading dock tacked on to the building’s north loading dock and west façade, formerly used to bring towering box cars into the building itself. A small portion of offices occupied the third floor, accessed through a nondescript corner entrance, leaving the building’s ornate brick and terra-cotta face mostly shuttered.

The original soaring, single-glazed steel industrial windows were badly rusted and had been covered with corrugated transite panels on all but a handful of south-facing openings. Although the concrete structure largely outlasted time, brick façades and terra-cotta ornamentation were in disrepair. The building was heated with several industrial package air handlers, which constantly struggled to keep up with heat lost through window openings and rotted roof insulation. The building had become an enormous, uninviting presence at the edge of a struggling residential neighborhood.

In 2016, with a 20,000-housing-unit shortfall in the region, adapting the former printing factory into residential use became an appealing challenge for Trivers. The design firm’s impressive update of the facility earned it an Honorable Mention in the Multifamily category of retrofit’s second-annual Metamorphosis Awards.

The deep floor plates of the daylight factory resisted conversion to dwelling units, where exposure and connection to outdoors is paramount. Initially presented with a request to “donut” the building and create a large internal courtyard, Trivers’ team endeavored to retain the character of industrial innovation of clerestories and maximize the amount of original structure that could be maintained. It was imperative that the proposed design provide at least the number of units to maintain the developer’s pro forma.

The original high-bay clerestories provided space to create small footprint, lofted units within each structural bay. By removing the timber roof deck between clerestories, a series of internal courts were carved into the building, ringed by new operable storefront enclosure and steel-replica windows, thus creating communal outdoor space shared by clusters of units at the center of the floor plate. By maintaining the original steel purlins and adding new tie-rods for lateral stability, each garden maintained an open-air “roof,” which scales down the space, creating a sense of intimacy within the massive building. Through this strategy, basic human needs of access to daylight, fresh air, and connections to nature and community were met while preserving the original beauty and character of the historic structure.

Material stewardship is central to the success of Trivers’ design concept. By utilizing cross-laminated timber (CLT) floors for lofts within units, the depth of the floor assembly was reduced by more than 12 inches from joist construction. This maintained a viable head height in the lofted bedrooms, as well as reduced the length of stair run to save valuable space in a 20- by 20-foot unit footprint. Providing viability to the concept, the design maximized 11,000 tons of embodied carbon in the original steel and concrete, as well as created a total carbon benefit of 376 metric tons by using CLT in lieu of a traditional floor structure.

A surprising discovery during design revealed that the original factory floors were a dark, monolithic terrazzo obscured by years of dirt. Polishing these floors and leaving the original timber roof deck exposed further minimized the use of new construction materials and strengthened the atmosphere of the project.

Integrating the residential program into the industrial volume is also embraced in the details of the design. Two of six massive steel water tanks that fed the original sprinkler system were retained in place and carved open to create intimate lounge seating as a building amenity. The remainder of the rooftop sprinkler tank room was adapted into a sky lounge, opening to a rooftop deck and pool with views of the nearby urban skyline.

Vestiges of the printing factory are woven throughout the interior design with a dark, “inky” color palette; early-century furniture pieces; and artwork inspired by original type- setting procedures. Built on a solid foundation of historic industrial architecture, Woodward Lofts is a home unique to its place, woven throughout time.

CARPET: Lapidus from Milliken, Kinetex from J&J Flooring and Color Choice/Facet from Patcraft