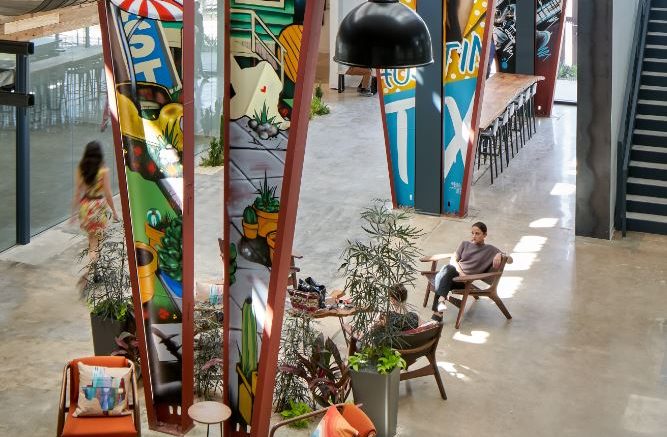 Positioned at the heart of vibrant east Austin, an abandoned warehouse has been reincarnated as an active, dynamic neighborhood hub. Built in 1972, the 65,000-square-foot warehouse’s unique appearance was preserved while transforming the structure into a modern office space, optimized for collaboration.

As the former location of the Balcones Recycling Center, the design team at Gensler decided early that recycling the existing structure was crucial to the success of the project. But the team wanted to go beyond mere preservation. It wanted to improve the often sought after character of the east Austin neighborhood in which the building resides. The word “upcycle” embodies the design approach for this project. This vision earned Gensler an Honorable Mention in the Transformation category of retrofit’s Metamorphosis Awards.

Before Photos: TRAVIS ALBRECHT and After Photos: DROR BALDINGER

The decision to reuse was also an economic one. One big benefit of restoring an existing structure was extreme affordability. New office building construction in Austin can range from $150 to $250 per square foot. UPCycle was transformed into a new creative office environment for $84 per square foot. This low cost of construction was achieved through low-cost, high-impact materials (such as reclaimed wood and steel panels) as well as the reuse of materials (such as the existing corrugated metal panels as exterior cladding, exposing of the steel structure and concrete slab as finish floor).

Every component found onsite, from the steel structure, to the metal panel skin, to the existing railroad tracks, to the graffiti art found from past exhibitions, was reused and enhanced to transform the existing warehouse into a dynamic creative environment. If a component could not be reused then it was salvaged to be utilized in another project. By recycling and upcycling 95 percent of the existing building, approximately 1.83 million kilograms of embodied CO2 was saved and the life of the existing structure significantly lengthened. This savings amounts to the equivalent of taking nearly 450 cars off the road.

The reuse of the entire building and its materials and the incorporation of reclaimed materials make this project unique. The embodied form of carbon will make up about half of all carbon emissions from new construction during the next 30 years. Because of this, a focus on repositioning existing buildings will become a more important strategy to combat climate change. Instead of tearing down and scrapping what has existed for decades, UPCycle envisioned a new life for the building.

New elements upgrade the building and turn it into a more attractive office environment, including butterfly trusses covered in graffiti by local artists and a new roof with clerestories to introduce more natural lighting. The site also includes a repurposed train car functioning as a front porch lounge equipped with seating, Wi-Fi and music. The boxcar plays an integral role in making this project forward-thinking and respectful of the building’s history with the site’s direct access to the adjacent rail lines and train tracks.

What was an opaque, uninviting warehouse is now a light-filled, creative office building. A mere metal shed is now a comfortable and efficient space that encourages interaction and connection between the tenants and the surrounding neighborhood.

To read a full feature about UPCycle, see the January-February issue, page 34, or visit bit.ly/3a5imZJ.

Technoform Doubles the Size of Its Warehouse in Ohio

COVID-19 Is Requiring Changes to Buildings for Occupant Health