Positioned on essentially a full city block in Atlanta, the expansive landmark Sears, Roebuck & Co. building has seen its share of occupants and tenants. Beginning in 1925 as the company’s catalog store and Southeast distribution point, then sold in 1991 to the city of Atlanta for use as City Hall East, the building’s bygone and more appreciated era on the part of locals had become something of the past.

The year 2011 saw a new owner, Atlanta-based Jamestown, an investor of high-quality real estate, taking the reins. Jamestown set out by consulting with neighborhood residents to determine the best uses for the building, followed by one of the region’s most impressive renovations, transforming the industrial space into a mixed-use complex to include retail, restaurants, residences, offices and green space. 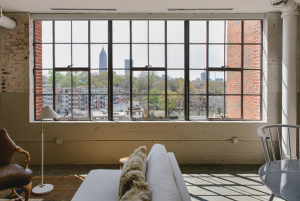 Jamestown set out by consulting with neighborhood residents to determine the best uses for the building.

The building has been bestowed a new name, Ponce City Market, given its new uses and famous Ponce de Leon Avenue address. Atlantans have watched the adaptive-reuse plan unfold for more than two years, and the area is abuzz with new interest about what many are calling the building’s rebirth.

Possibly the most exciting to select locals is the fact the building now includes residences, offering a comprehensive live-work-eat-shop-play opportunity for those lucky enough to call the FLATS at Ponce City Market home.

Stevens & Wilkinson, a full-service commercial architecture, engineering and interior design firm based in Atlanta and Columbia, S.C., announced during early winter 2015 its role as architect for the adaptive reuse and historic renovations of the uppermost seven floors of the east and west wings, creating the new FLATS at Ponce City Market. The completion of the apartment homes achieved a major milestone in the overall Ponce City Market project, which will restore 2.1 million square feet of space, creating a vibrant urban centerpiece that combines 300,000 square feet of retail and restaurants, 450,000 square feet of office space and 330,000 square feet for 259 residential units.

As lead architect for Ponce City Market’s residential portion of the building, Stevens & Wilkinson oversaw the comprehensive creation of the FLATS to include a mix of studio, one-, two- and three-bedroom units, including 17 two-level lofts. Fogarty Finger, based in New York, contributed to the interior design. 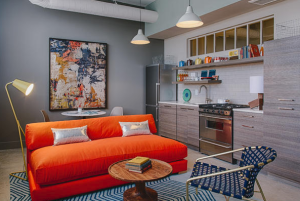 As part of its historic preservation and adaptive-reuse effort, Stevens & Wilkinson embraced the building’s 1925 architectural features, including historic masonry, columns and original design elements. Floor plans range from 575-square-foot studios, or flats, to 1,790-square-foot three-bedroom lofted units. All units have at least one large steel window with generous living areas located near the windows. Bedrooms that do not have an exterior window receive borrowed light through a clerestory window, which also creates the illusion of more open space. The units have one bath per bedroom, typically, and onebed-plus-den units include larger bathrooms with a double vanity. Done in various shades of gray, characteristics of the bathrooms include frameless glass showers; porcelain tile floors that resemble slate with contrasting subway tile on the walls; modern fixtures; and European cabinetry and counters. Tubs are only in the second bath of the two-bed units, as the market showed less desire for bathtubs.

Stevens & Wilkinson designed the kitchens with clean lines and ample working area within condensed space. The cabinets are European-style with modern pulls and include a tall pantry for storage, soft-close drawers and a panel-front dishwasher. The stainless-steel appliances in each FLAT comprise a gas range, per market demand; counter-depth refrigerator; and a microwave that fits in the pantry. Open floating shelves above the sink allow residents to display glassware and dinnerware.

In general, the layout of the FLATS was dictated by the limitations of the existing structure. Only certain areas structurally would allow cutting away the floor to run vertical services, and large columns are located 20 feet on center. These factors produced the unit footprint, and the various design and placement considerations were arranged accordingly.

LEED v4.1 Is Open for Registration