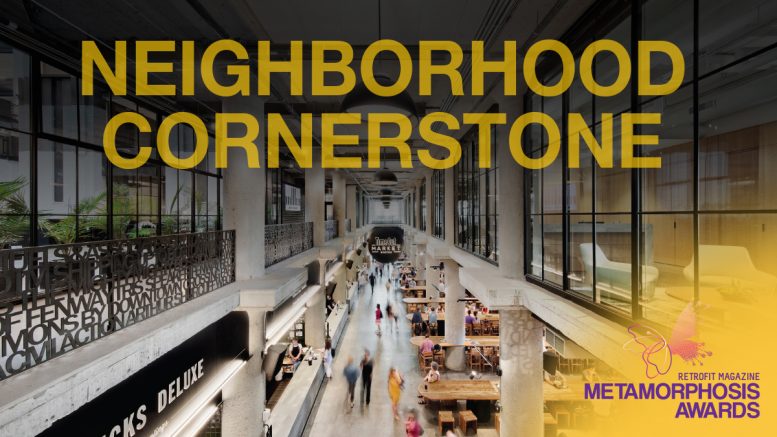 Developers Samuels & Associates collaborated with Elkus Manfredi Architects to reimagine the former Sears Roebuck & Co. store and distribution center, a longtime landmark of Boston’s Fenway neighborhood. The developers imagined it as a dynamic mixed-use destination that would complement the high-energy neighborhood while honoring the building’s historical significance.

Opened in 1928, the Sears store, warehouse and distribution center—an 8-story limestone and brick commercial building with a 12-story iconic tower centered above the southwest elevation—was a retail powerhouse serving all of New England and parts of New York for 60 years. After drawing shoppers and employees to the Fenway neighborhood for decades, Sears abandoned the nearly 1 million-square-foot building in 1988. Soon after, it was protected from demolition when it became an official Boston Landmark and was listed in the National Register of Historic Places. The building reopened in 2000 as the Landmark Center with a movie theater, office spaces and big-box retailers with the parking lots to match.

By the late 2010s, the Fenway area had evolved, leaving the Landmark Center behind. The neighborhood had enjoyed a renaissance over two decades with numerous projects that transformed the area into a dynamic, pedestrian-oriented live/work/play community. The Landmark Center’s retail and dining mix now was out of step with the changing neighborhood; its office spaces were underused; and its architecture was obscured by 20th century renovations. The Fenway has become an innovation district with science and technology, startups and incubators, and the Sears building had all the essential infrastructure and character to attract another generation of tenants and guests.

The stately landmark had potential to be a neighborhood magnet. With a connective public realm that welcomes workers, residents and visitors alike, the developers envisioned a vibrant, mixed-use destination that links Boston’s Fenway and Longwood Medical neighborhoods and engages the newly restored Muddy River link of Frederick Law Olmstead’s Emerald Necklace park system, which includes 1,100 acres of parkland extending from Boston’s Back Bay through Brookline and Jamaica Plain to Franklin Park in Dorchester.

A laser-focused attention to historic architectural detail started with designers asking: What kind of building is this? What are its true design roots? Its original Art Deco elements had been minimal; however, interim renovations overemphasized these attributes.

Opting to celebrate the building’s mercantile design roots as more genuine, designers took the building interior back to its infrastructure, removing the Art Deco motifs that had been added over the years. Design features now include exposed concrete columns and steel metal frames on windows and storefronts. Pneumatic tubes that were used to move merchandise throughout the complex inspired industrial design of architectural elements, such as light fixtures, staircases and security desks.

With a fresh, authentic canvas and vision to create a grand entrance under the tower and open a connection to Brookline Avenue, Elkus Manfredi Architects’ design team removed large sections of the second floor to create a new social entry space and a grand food hall. This connected the office lobby on Park Drive to the new entrance on Brookline Avenue while providing more light to the ground-level entrance lobby and new food hall. Architects and engineers collaborated closely with much back and forth to determine the optimal way to achieve this design. Steel collars around the columns reinforce the newly created 2-story spaces. The transformed lobby—the new heart of the historic building—connects the public spaces to office tenants and visitors like never before.

Efforts to enhance the building’s porosity at the pedestrian level encourage greater interaction and opportunities for connection between the building and neighborhood. For example, garage-door windows that open in nice weather blur the lines between inside and out at the food hall. Spacious paths connect the highly walkable neighborhood with public transportation. A significant new installation of outdoor sculpture—Grouping of Works from Fountain, 2017-19, created by Brooklyn artist Nicole Eisenman—enlivens the 1-acre park.

The design team created space for a new 25,000-square-foot dining/food hall developed by Time Out Market with multiple stalls from well-known and up-and-coming chefs. Communal dining tables are located inside and outside, connected via new, fully operable storefront windows that fold up and away in nice weather. Open to the floor above with new glazing on the second and third floors, the design allows light to filter in from above.

The food hall leads into the 2-story ground-floor lobby, also accessible from the main entry, with comfortable living-room seating areas that invite casual collision of guests. Massive original columns and pieces of the second-level floorplate recall the original building and create a dramatic sense of scale. A new custom-designed, three-level industrial iron staircase features an eye-catching rail with a running list of Boston-centric names and places, which is as much a conversation piece as a functional fixture that leads up to the second level or down to valet parking beneath the building.

The big-box retailers at ground-level have been replaced with urban-focused shopping opportunities that respond to the vibrant, walkable Fenway neighborhood.

Two daylit atria with glass ceilings were renovated and have become amenity extensions of the office spaces that occupy the upper floors.

A thoughtfully curated public art program includes artifacts that celebrate the building’s history as a Sears warehouse and distribution center by displaying artifacts that once appeared in Sears catalogs.

After a design process that included extensive engagement with the community, the Landmarks Commission and Parks Department, 401 Park—now owned by Alexandria Real Estate Equities Inc. with Samuels & Associates as property manager—is once again a vibrant and vital community hub that remains true to its roots.

The successful execution of a grand vision for a center of 21st century innovation and acute attention to detail resulted in a space that inspires collaborative creative thought, welcomes visitors and fosters community in a fiercely proud Boston neighborhood. Repurposing this existing building is not only a more sustainable choice, it honors the rich history of this neighborhood cornerstone and a part of our collective national history, reusing and repurposing an underutilized property by reimagining its possibilities.