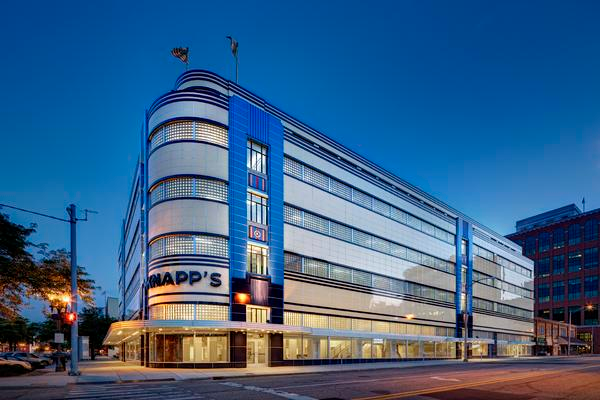 The Streamline Art Moderne façade, one of the largest examples of this classic Art Deco treatment in the U.S., now consists of an aluminum rainscreen system layered over insulation and a thermal barrier.

Built in 1937, Knapp’s Department Store was once a proud shopping destination in the heart of the Washington Square district in downtown Lansing, Mich. The building was a distinctive example of Streamline Art Moderne architecture, designed by architect Orlie Munson with a sleek, curved façade clad in horizontal bands of yellow panels punctuated with bright blue vertical pylons. When construction was complete, Knapp’s new location was praised in the local press as “the most modern building in the Midwest”. By 1949, after a major expansion, the 5-story building occupied a full city block. 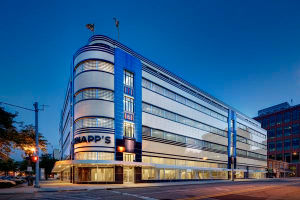 The Streamline Art Moderne façade, one of the largest examples of this classic Art Deco treatment in the U.S., now consists of an aluminum rainscreen system layered over insulation and a thermal barrier.

Knapp’s Department Store welcomed shoppers to a state-of-the-art retail setting with deep, inwardly focused floorplates that encouraged browsing and circulating from floor to floor. The signature façade included ribbons of prismatic glass block windows that allowed natural light into the interior without “distracting” shoppers with views of the outdoors. Also known as the J.W. Knapp Company Building, the store thrived for decades but, by 1980, after several changes in ownership, it finally closed its doors. The Eyde Co., a local real-estate developer, purchased the building in 1983—the same year that it was added to the National Register of Historic Places. At that time, the Knapp’s building was acknowledged as “a landmark in the progress of the modern movement in architecture in Michigan”

The Eyde Co. divided the retail floors into offices and leased much of the building to state government agencies. By 2003, however, the state offices moved out, leaving the building vacant for many years. Recognizing its historic status, prominent location and cherished history among local residents, Eyde Co. officials sought strategies to redevelop the building yet preserve its unique architectural heritage. After several years of planning, design and careful reconstruction, Knapp’s Department Store was reborn in 2014 as a vibrant mixed-used development, once again claiming its legacy as a downtown landmark and architectural icon. 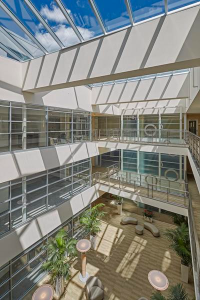 A new full-height atrium brings natural light into the mixed-use building and serves as an elegant lobby and event space.

Architect Elisabeth Knibbe, FAIA, a principal with Quinn Evans Architects in Detroit first became involved with planning for the building’s future in 2001 when she was asked by the state’s historic-preservation office to study the building for a potential renovation. “The building had become a white elephant,” she says. “With such a deep footprint and no windows, it required a significant intervention to make it attractive for continued office use or to bring in a residential component.” Knibbe outlined three alternatives in a report: retain the building’s office use as is and restore the façade; restore the façade and cut into the center of the building with an atrium to bring in more light; and, in a third option, add residential units to the top floors.

Although the market conditions for a major renovation weren’t right at the time, Knibbe and Nick Eyde, project developer with The Eyde Co., recognized the building’s potential and its value as a downtown landmark. They reconnected in 2008 after The Eyde Co. officials began reconsidering the project and dusted off Knibbe’s initial report.

Four years later, after carefully researching adaptive-use options with the Quinn Evans Architects team, The Eyde Co. launched construction with an ambitious plan to restore and reconstruct the iconic façade; slice into the building with an elegant new atrium; and transform the former department store with modern, Class A offices, street-level retail and restaurant space, and 23 top-floor loft residences.

Innovative in the 1930s, the “Maul Macotta” façade was composed of enameled steel and cast-in-concrete panels that were hung from a steel substructure and glass block. The panels had deteriorated because of age and moisture and were replaced with a state-of-the-art rainscreen system consisting of a 2-inch aluminum panel layered over 6 inches of insulation and a thermal barrier. The original, emblematic “K” panels were preserved along the replicated façade.

Be the first to comment on "A Historic Department Store Is Transformed into Modern Offices, Retail and Restaurant Space, and 23 Loft Residences"