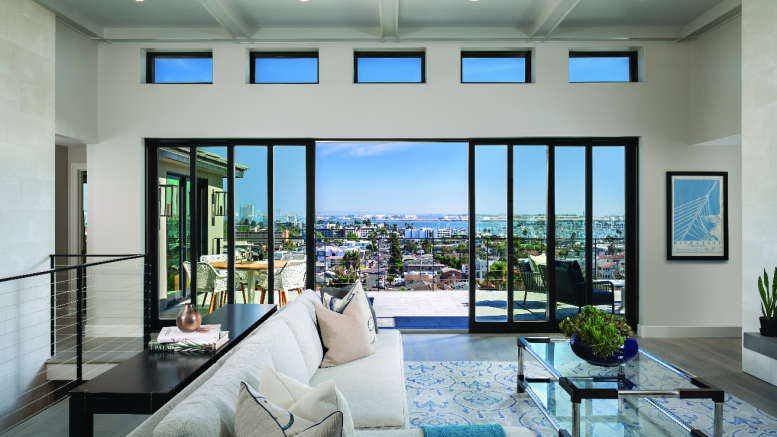 The home’s location and view first attracted the homeowners to this neighborhood near Point Loma. It overlooks an international airport, downtown San Diego, an active military base complete with fighter jets and aircraft carriers, the Coronado Bay bridge, the ocean and marina—all of which are set against a backdrop of the hills of Mexico.

Accepting that the 1960s property would require considerable changes to meet their family’s active lifestyle, the homeowners sought out California-based Will & Fotsch Architects Inc. The homeowners and architects quickly established a connection to confidently guide them through the planning, design and realization of this major renovation.

“They were trusting and gave us creative license,” says Andy Fotsch, principal of Will & Fotsch Architects. “This was one of the fastest projects I’ve ever been involved with. We went from designing a floor plan to permitting in three months.” Renovation, construction and interior finishes were completed in less than 12 months.

To achieve the desired design, functionality, aesthetic and value for Plum Street’s renovation, Fotsch identified two primary challenges: “Challenge one was to determine the best floor plan to create a comfortable series of spaces for living and entertaining. We wanted to keep as much of the existing structure as possible while making the greatest positive impact.

“The second challenge was to determine a style that would update the house, yet work with the overall massing and structure,” Fotsch continues. “In San Diego, there’s no consistent architectural style. We really focused on opening it up and making it feel more connected.”

Examples of the design precision employed include:

Through the lower level’s multi-slide doors, the back steps lead into a series of small flights with landing areas to better connect the house to the pool. It takes only two or three steps to reach the grill, another set of short steps to the deck chairs, another set to the pool. A 5-foot waterfall also connects the upper landing to the pool. With an entire new series of decks and terraces, the pool now provides an engaging, energetic atmosphere with access to the new lower level.