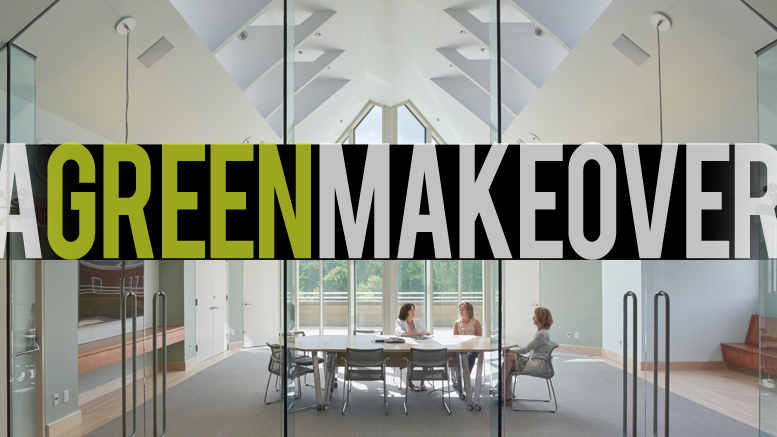 For more than 120 years, the William Cullen Bryant School has stood as a landmark of Great Barrington and the Berkshires region of western Massachusetts with its distinctive arts and crafts design and central location just off Main Street. When cosmetics magnate and preservationist Jane Iredale was seeking larger, sustainable headquarters for her locally based company—Iredale Mineral Cosmetics Ltd.—a few years ago, she zeroed in on the school as an unorthodox yet inventive solution. Croxton Collaborative Architects was able to significantly increase the amount of usable interior square footage from 12,000 to 21,000 square feet without expanding the building’s historic perimeter walls. The team carved habitable space out of the basement and the attic, which now is the most architecturally dramatic space. Massive skylights and a wall of new glass fill the attic with light.

New York-based Croxton Collaborative Architects (CCA) PC, known in green-building circles for designing landmark headquarters, including the Natural Resources Defense Council and the National Audubon Society, both in New York, was brought on board for the transformational project.“Bryant was beautifully put together—very sturdy in terms of the building technology of the time,” says CCA President Randolph Croxton. “There was this sense of pulling from nature, not doing very elaborate decorative treatment but being extremely straightforward, expressing the local materials being used: the wood shingles, the boulders forming its base and the local sourcing of all the materials. And it’s a very important touchstone for many of the people in Great Barrington. During the project, we’d constantly hear people saying,‘This is where I went to third grade.’”

Following the construction of a new regional elementary school 5 miles outside the town in 2004, the Bryant school sat vacant for more than a decade despite being an official Massachusetts Cultural Resource. Its fate and that of the nearby Searles Middle School (also dating to the 1890s) were uncertain at best. Now, Bryant is not only enjoying new life as the Iredale Mineral Cosmetics headquarters, but also helping to revitalize the town beyond its center.

“Great Barrington has a vibrant Main Street that’s still thriving with local businesses. But when you get just off Main Street, you start to notice the empty buildings,” explains Suzie Fowle, a wildlife biologist and longtime member of the Great Barrington Planning Board. “The Bryant school is part of a larger school complex of buildings, and it still feels quiet in that part of town, even though it’s right by a public river walk. Seeing a building like this get revived and done beautifully and sensitively, it’s wonderful, and it’s also a beginning.”

Iredale says the building and its restoration made an ideal statement for her company. “Our makeup brand always has been considered a natural brand. We use primarily minerals,” she explains. “So we were interested in having something that was consistent with that image—something built out of natural materials, like the boulders around the building, the shingles, the wood floors. They all fit with the image of our brand, which is some- thing natural but is well designed and works well. And we wanted a place that was unique, so when we brought people here from all over the world they would get what we were about as soon as they walk in the door.”

The design couldn’t just be a faithful historic restoration. Because the building is located less than 400 feet from the Housatonic River and part of the Housatonic River Watershed, a natural system that moves through several nearby towns, the site had to have optimal stormwater-runoff capabilities to ensure the building’s resilience. CCA’s design, therefore, includes a comprehensive rain-garden system integrated with a new stormwater detention tank. But the outside of the building is also a canvas for growing flowers and native plants, an Iredale Mineral Cosmetics tradition dating back to the days of including lavender from Jane Iredale’s home garden in every package shipped to customers.

The original project site was almost entirely asphalt with enormous amounts of erosion and particulates flowing directly into the nearby Housatonic River. Therefore, CCA’s design includes a comprehensive rain-garden system with a new stormwater detention tank. The outside of the building is also a canvas for growing flowers and native plants.

“The original project site was almost entirely asphalt, with no vegetation, and with enormous amounts of erosion and silt and particulates flowing directly into the river,” Croxton explains. So the designer created what he calls “a necklace of rain gardens that are gravity fed as their pools fill up and overflow in sequence toward the river.” Overall, the landscaping had two purposes. “On the one hand, it was a fundamental issue of sustainability and managing stormwater particulates and flooding, which are major issues adjacent to the river,” he explains. “But they also turned out to be grace notes in Jane’s expression of her gardens. It was a great combination.”

The extensive water-management plan was only a part of the sustainability drive that sets ambitious goals for a LEED Gold rating (but also goes beyond its requirements). The project diverted more than 90 percent of waste from landfills, for example. Thanks to added insulation and high-quality windows, the building uses 46 percent less energy than if it had been built by standard construction methods and materials and achieves a 27 percent cost reduction. The de- sign retained and beautified some of the natural materials inside and out, such as original maple flooring on the first and second floors. And the client wanted the building to be full of natural light, which studies show makes employees more productive and aids in staff retention.

“It didn’t seem conceivable to do a building that wasn’t sustainable in some fashion,” Iredale says. “It’s much harder to do it with an existing building instead of from the ground up. Fortunately for us, the building was built very solidly. The people building it knew they were building it for their children. They put their hearts and souls into it. The whole thing fit into our philosophy.”