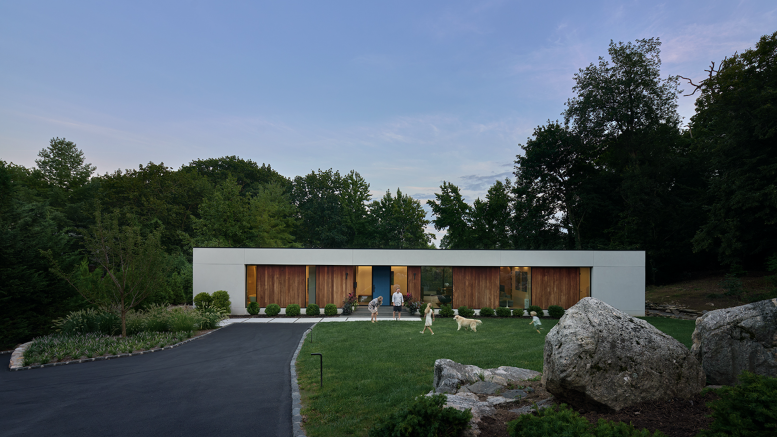 Jay and Dana Vasser were living and working in Manhattan when they found their dream home. Jay was convinced Pelham Manor, a suburb just outside of New York City, was the perfect place to raise their family—close to the city, beautiful, suburban.

Most of the homes in the Pelham Manor area were built on large lots in the 1920s with traditional detailing. However, the couple was immediately drawn to the only mid-century home in the area. Built in 1961, the experimental Mid-century Modern home was designed by an architecture husband and wife team Harold and Judith Edelman of The Edelman Partnership (now ESKW/A). They were civic architects, and Judith was a pioneer for women in architecture. This home was the architects’ first residential design. For the Edelmans, it was a case study and statement, and they ended up living in the residence for many years.

The home’s 3/4-acre lot originally belonged to a Catholic church and was parceled off and sold to the Edelmans. The Vassers loved that the lot was quiet and private; the home is flanked by the 15,000-square-foot church and adjacent rectory. Over the years, the Mid-century Modern home had gone through a couple owners and a series of renovations and additions that were not very sympathetic to the original design intent. Although the Vassers knew that a lot of work was required to bring the house back to life, they purchased it in 2013 with the intent of slowly improving it over time.

A nor’easter in 2018 dramatically changed their plans: The storm snapped in half a 100-foot-tall pine tree adjacent to the house. The top of the tree crashed down on the structure, leveling the sunroom addition in the back and piercing a giant hole in the roof of the main house. The Vassers were forced to urgently undertake a major restoration and renovation plan.

The Vassers wanted to maintain the qualities they loved about the home, such as the exposed redwood structural frame and roof deck, as well as its cozy low-slung vibe. However, many of the architects they met with wanted to blast through the walls, take down the beautiful beams and eliminate much of the home’s character. However, Scott Specht, founder of award-winning Specht Architects, appreciated what the Edelmans were attempting to achieve with the home. Specht wanted to preserve the integrity of the original design while enhancing the spatial and visual qualities. He also expressed the importance of bringing the home up to current standards for function and performance.

Specht suggested a nuanced approach. “The original house was just a basic rectangle—a formalized equal-bay design, understated, low to the ground and modest,” he says. “The layout was open with a great amount of natural light. I really looked into how to restore the good parts and get rid of the rest. It was not really a classic mid-century design—it had a lot of quirky elements that didn’t work well—but we wanted to keep the spirit of the house intact.”

In addition to Specht’s goal of maintaining the home’s spirit, the Vassers wanted to make it more energy efficient and update it for a more contemporary lifestyle. The original house was 2,400 square feet; Specht added 1,500 square feet, converting it from a three-bedroom, three-bath house to a four-bedroom, four-and-a-half-bath home. In consultation with the Vassers, he decided to retain the original footprint but create more space by enclosing an outdoor area previously underneath the back deck, which expanded the walkout basement and brought the house’s size up to about 3,900 square feet.

The major visual feature at the front of the original house was a series of large jalousie windows. These were popular in the 1950s and ’60s and worked well in warm climates to allow for ventilation throughout a space. However, with uninsulated glass and poorly sealed joints, they didn’t work well in New York. Specht kept the front exterior concept of the simple “box” with a warm feel and lots of glass but redesigned it completely, using insulated windows and new wood cladding. Specht then framed the entire composition in a white “proscenium” that focused attention on the main façade elements while providing a parapet to hide the many mechanical elements on the low roof.

The original entry was flush to the exterior—not great for entering the house in inclement weather—so the Specht Architects team created a recessed entry porch that features new lighting and a bright blue front door.

A Mid-century Home Feels Inviting Despite Its Rugged Surroundings

A Tract Home Is Modernized while Adhering to Challenging Guidelines

A Mid-century Motel Is Reimagined as a Boutique Destination