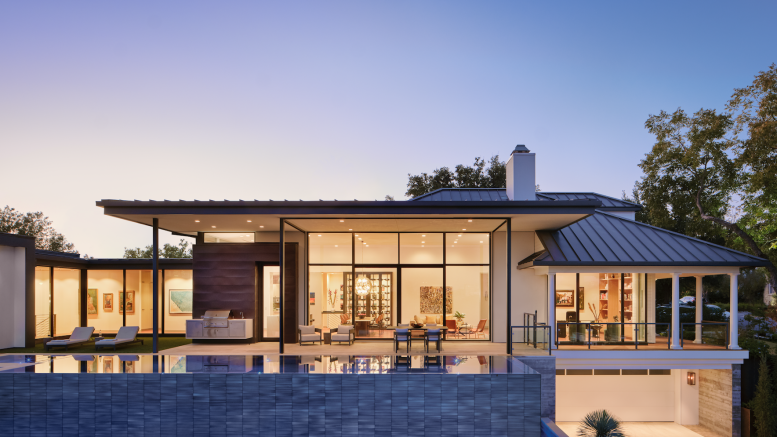 Austin, Texas, realtor Sylvia Sharplin and entrepreneur Dan Sharplin purchased their new home in the historic and highly desirable Clarksville neighborhood, which flanks the west side of Austin’s downtown. The more than 100-year-old house was among the few remaining that had not been scooped up and demolished, thanks to its previous owner who had lived in the house for more than half a century.

The couple was drawn to the home because of its one-of-a kind views of the Texas State Capitol and the expanding Austin skyline. Perched on a hill, the house is uniquely located at the threshold between sparkling new downtown high-rises and the historic fabric of one of Austin’s oldest and most storied neighborhoods.

The home’s north (front) and part of its western street-frontage elevation are part of Austin’s historic overlay and thus subject to close scrutiny by the city. Old Sanborn maps of Austin suggest the house was built in 1915, when its Clarksville neighborhood was considered to be far outside the city, despite it being only eight blocks from the Texas capitol building.

Austin architecture firm LaRue Architects spent a great deal of time researching the home’s history and consulted with Architexas, a historic-restoration expert, to help inform its work. Along with Four- square Builders, the team took great time and care to hold onto the home’s historic character by maintaining the originally intended front and west façades. The team set out to painstakingly recreate the original house, seamlessly blending old and new into a 3,900-square-foot home (from the original 3,250 square feet).

By maintaining the home’s hip roof and wrap-around porch, the front façade remains appropriately in step with the style of the historic neighborhood. “At the street, the home presents itself as a good neighbor in form, scale and material, all updated to stay true to the original style,” says James LaRue, AIA, principal of LaRue Architects. “Even inside the front door, the immediate impression is one of a renovated traditional home, seen in the rich shiplap paneling lining the entry hall.”

The team had historic photos to guide its design of the front and western façades. In addition, Architexas provided as-built plans, and architects James LaRue and Associate Architect Emily Haydon spent many hours measuring and documenting the building themselves. Surprisingly, when the Sharplins purchased the home, much of the house was in its original state (or resembled its original state).

A simple material palette was used on the exterior: Poly-ash siding with a wood appearance mimics the original, traditional exterior in the front. Reconstructed traditional windows reside with the original sidelites, which frame a new entry door. Meanwhile, expansive glass, stucco and metal panels were installed on the side that faces downtown and rear of the home to create a modern exterior. Teak decking is used on the porch in front and terrace in the rear as a unifying element. The front façade is a painted soft white shiplap while the back of the house and modern addition is the same color in a contemporary stucco. The team found sconces that not only suit the historic front, but also go well with the very clean back.

The current dormer is rebuilt to the original dormer design and, because of the historic overlay requirements, it had to remain. In the original plan, this space was occupiable; however, in the current design, it is attic space and houses a mechanical unit.

The home’s location on a steep hillside presented a number of challenges for the intended work. The pier-and-beam house sat 9 feet off the ground at the site’s lowest point, and the clay content of the soil—though suitable for pier and beam—added structural challenges for the renovation and addition, which included plans for a negative edge pool and floor-to-ceiling windows.

The pool is essentially cradled from the main house foundation. The water at the negative edge drops a large distance, so the catch basin was brought up to receive the water as it overflows (so the water does not dissipate). This elevation, along with the newly installed floor-to-ceiling windows, is seen clearly from downtown.