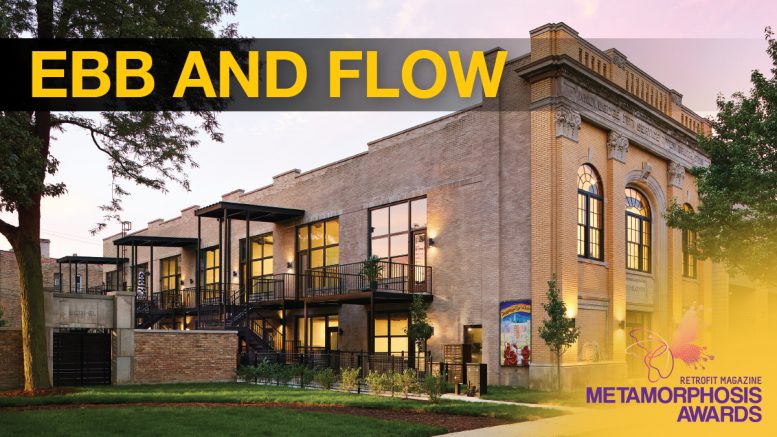 Chicago’s neighborhoods have historically been in a constant state of change. In the mid-1920s, the Logan Square area was home to many ethnic backgrounds, including a thriving Jewish community in need of a new place of worship. A congregation formed and commissioned Architect Edward Steinborn to create the stunning yellow brick and limestone structure that was to be the synagogue for the Temple Beth-El congregation for many years.

However, in what is the typical ebb and flow of Chicago cultural neighborhoods, the Jewish population in Logan Square after the Great Depression and World War II dwindled as its people moved to new neighborhoods or out of the city entirely. The neighborhood went into a period of decline and, by the late 1950s, the temple could no longer sustain a congregation and a new use was sought for the building.

As the demographics of the neighborhood changed, needs for community services also changed. It was in the late 1950s that the Boys Clubs of America (later the Logan Square Boys & Girls Clubs of America) took over as steward of the former synagogue for its second life as a children’s social club in which kids would be taught skills and be kept off the streets. The Logan Square Boys & Girls Clubs of America remained in operation for the better part of 60 years until the neighborhood once again morphed, and community needs again changed.

In the early 2010s, club representatives realized that membership was declining as the neighborhood became a trendy place to live in Chicago. The club operated in the building until 2018 when it was moved to a new location and, once again, the future of the former synagogue was unclear.

In 2018, a trio of real-estate developers—Ranquist Development, Campbell Coyle Real Estate and New Era Chicago—got together with the architecture firm Pappageorge Haymes Partners to reimagine the building and its place in the neighborhood by creating the Grand Palmer Lodge, a multifamily residence. The developers had worked with each other on previous projects, and each brought a particular skillset needed for the project, including community outreach, acquisition and entitlement by the city of Chicago, and creating the best economic use for the building.

“When we started assessing the condition of the building in April 2018, it wasn’t nearly in as bad of condition as we thought it might be,” says Luke Marczewski, associate at Pappageorge Haymes Partners. “It was essentially a fully functioning building at the time, albeit underutilized due to the declining club membership. Although the original use of the building was a place of worship, after 60 years as the Boys & Girls Clubs, there wasn’t much left of the interior fabric of the building that would indicate it was a synagogue. The exterior brick was in good condition and only required minor tuckpointing. The roof had been maintained and wasn’t leaking into the building, so we got lucky that we got a solid building with few condition issues to start with.”

The project went through a lengthy process of acquisition and entitlement with city offices and concurrent negotiations with various community groups that had an interest in seeing this neighborhood icon preserved rather than torn down. The local groups went as far as having the property down-zoned, which would severely limit future uses of the site should the building be torn down. Thankfully, the neighborhood preservation groups and the developers shared a common vision of reusing the existing structure. “Although the neighborhood organizations wanted to see the building preserved, everyone understood that the use of the building was going to change and they were not opposed to it. It was a real credit to the development team to work together with Logan Square Preservation to achieve a mutually acceptable result,” Marczewski recalls.

Converting a 100-year-old, 2-story building into a new use is rarely easy and, according to Marczewski, the design team had several challenges to overcome. “One of the biggest issues that we had to contend with was the change in levels of the building,” he says. “Historically the worship space was on the second floor, which had become a basketball court for the Boys & Girls Clubs due to the high ceilings. The lower level featured a sunken rec room which was another level change. There was no way we could create a typical double-loaded corridor down the center of the space. We had to get creative and move the units’ entries to the exterior and create a shared exterior stair configuration.”

In addition, not all of the building’s elements were savable. The Annex, a 1950s-era addition on the side of the building, had to be demolished to accommodate the parking required for the project. “Although the Annex was ultimately removed, it was negotiated with Logan Square Preservation to retain some of the limestone trim elements of the building to create a border wall for a new pocket park to keep the feel of the former Annex,” Marczewski explains.

The replacement windows were one of the biggest redevelopment costs for the project. Historic tax credits were not pursued by the developers, but it was always the design team’s intention to be as respectful of the original structure as possible. “We worked very closely with the window manufacturer to match the historic style of the original windows and provide an energy-efficient window that meets modern energy code,” Marczewski says.

A challenge that always presents itself in historic building rehabs is how to deal with heating and cooling while being respectful to the existing structure. The design team took advantage of the high ceilings in the existing space and created a mechanical platform above the units’ bathrooms. According to Marczewski: “The mechanical systems we specified are fairly typical forced-air split-system units that don’t take up a lot of space. We were able to take advantage of the tall volume of space and hide the mechanicals above the typical 8-foot-tall bathroom ceiling.”

Marczewski says one of the more rewarding aspects of the project was the challenge and push by the developers to create higher density to make the project more economically feasible. He explains: “The objective was to provide 14 dwelling units. It was a puzzle as an architect to create an efficient demising plan within the constraint of the existing four walls and roof.”

Ultimately the architects were able to configure the plan to include two one-bedroom units, 10 two-bedroom units and two three-bedroom units. To accomplish this, the design team looked to the exterior of the building to accommodate typical circulation spaces. “We needed all of the interior square footage we could get, so we pushed the typical circulation spaces to the exterior, and 12 of the 14 units have a shared stair and private terrace entry,” Marczewski remarks.

While the building exterior is true to its history, the interiors of the dwelling units are sleek and modern. With clean interior lines and modern stainless-steel appliances, the residences are perfect for what the market desired. The 14- to 15-foot-tall ceilings and large windows allow for ample daylight deep into the space. Exposed brick was left in areas to give a pleasing warm texture to the units’ interiors. Heating and cooling ductwork was painted a matte black to help it recede into the background. The project was completely leased only one-and-one-half months after construction.

The Grand Palmer Lodge is a shining example of many entities working together to create a common goal. The redevelopment of the former synagogue and community center was a win-win for neighborhood preservation groups, concerned citizens and developers alike. And an icon of the neighborhood was saved for another generation while creating an economically successful development and respecting the historic urban fabric of the Logan Square neighborhood.