Separated from the Potomac River’s Virginia shoreline by only a public park and the recreational Mt. Vernon Trail, The Oronoco Waterfront Residences capitalize on real estate’s biggest asset: location. Set in Alexandria, Va.’s Old Town, the 60-unit condominium isn’t a typical high-rise box tower, however. Its bones belonged to the Sheet Metal Workers National Pension Fund Building, a U-shaped, 6-story, stepped office project that formerly housed government personnel. As part of the federal Base Realignment and Closure process, the 155,000-square-foot building ended up nearly vacant at a time when the city’s plans to reclaim the underutilized waterfront were in the throes of a lengthy, and often contested, public process.

AJ Jackson, managing partner at Bethesda, Md.-based real-estate development company EYA, says the reuse of adjacent industrial parcels was the focus of the waterfront plan and The Oronoco property escaped the debate. ”Our building and site was grandfathered into the plan so it wasn’t up for public discussion,” Jackson recalls. “I think the assumption was that it would remain an office building but that didn’t make sense for a lot of reasons: it wasn’t on a transit hub or in a commercial business district; it had small office floor plates with challenging circulation; and it wasn’t visually appealing.” 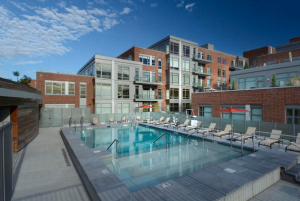 The existing square footage was greater than what the city’s current zoning allowed for new buildings, so a remodel offered greater financial return on investment.

Jackson says EYA never considered demolishing the oddly laid-out structure and starting from scratch because adaptive reuse is much quicker than new construction. Moreover, the existing square footage was greater than what the city’s current zoning allowed for new buildings, so a remodel offered greater financial return on investment.

“The key thing we had to make sure of was that that the city would let us move the square footage around to get the best use out of the space,” Jackson says. “We took out covered colonnades around the courtyards and demolished a very large atrium lobby, and added that space to the units by extended the building with new bays and terraces.”

The team took the structure down to its concrete columns to begin the renovation. The former entrance was a massive earthen berm that hid a 360-parking-space garage; the redesign removed the berm and cut the size of the garage by nearly half. It made perfect sense on paper but proved challenging in practice when the team discovered the condition of the garage’s concrete was greatly deteriorated and much more work was required to graft on new bays than anticipated.

The original building was a narrow 60-feet wide, so the team welded on new decks that offered views for residences above and then enclosed the under deck beneath to create additional indoor living areas for the units below. This bumped out the floor plates, making the building 65-feet wide to achieve EYA’s desired residential unit size. Marrying the floors in the new layout posed difficulties, and Jackson says the structural engineer, architect, contractor and EYA collaborated very closely to make it work. 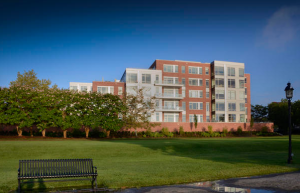 The original façade was comprised of bronze-painted metal panels with brown brick at the structure’s base. Now an alternating rhythm of red brick, metal panels and glass lends a modern flair to The Oronoco.

The office building had slab-to-slab heights of approximately 11 feet that hid the mechanical equipment behind drop-down ceilings. EYA’s team relocated the utility lines beneath the floor instead and added insulation, which significantly decreased the utilities’ noise. The line relocation also opened the space. Interior ceiling heights now rise to 10 feet, and EYA added floor-to-ceiling glass in the units to maximize views.

The generous glazing, coupled with a location on Reagan National Airport’s flight path only 4-miles away, presented a conundrum. “We worked with our architect and an acoustical consultant to select low-e glass that would reduce thermal loads in the unit, provide the needed dampening to block the sound of planes and retain visual clarity,” Jackson explains. “We found the right solution. From inside the units, you can watch the planes take off, land and fly past your window, but you don’t hear them.”

The building exterior also received a significant facelift. The original façade was comprised of bronze-painted metal panels with brown brick at the structure’s base. Now an alternating rhythm of red brick (more in step with Old Town’s brick colors), metal panels and glass lends a modern flair to The Oronoco. The team retained the U-shaped structure and added a landscaped courtyard in the center. The total remodel cost, including demolition and landscaping, was approximately $250 per square foot.