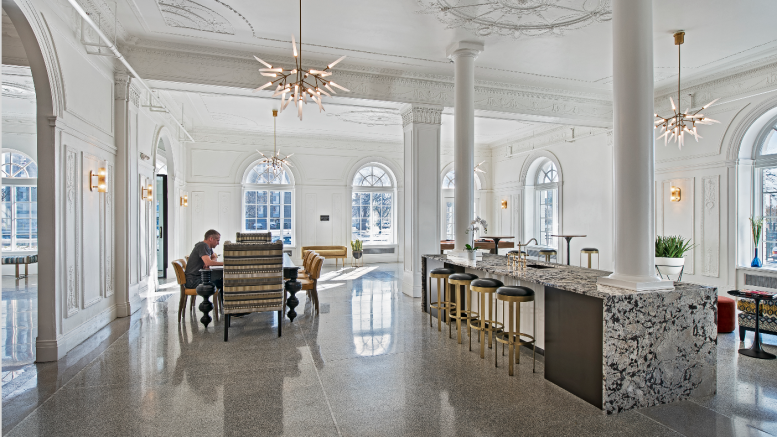 The Hamilton is a historically and architecturally significant building located in the heart of Detroit’s Midtown neighborhood. Situated at the intersection of Woodward Avenue and Martin Luther King Jr. Drive, the property first opened in 1913 as Hotel Stevenson and was placed on the National Register of Historic Places in 1997. In 2016, when Detroit-based Broder & Sachse purchased the building, it was the only remaining property owned by a trust for the Milner family—previously one of the country’s largest hotel owners. Then known as 40 Davenport, the building was rundown and in disrepair, but its historical character and premium location were ideal.

After a $12 million redevelopment, 40 Davenport has been reborn as The Hamilton, a metropolitan blend of historic charm and boutique design. Floor plans were modified, walls were torn down to reveal original dimensions, and a seamless blend of period architectural detail and fresh contemporary updates skillfully bring past and present together. The Hamilton retains the ornate molding, columns and exquisite finishes of its original iteration, and the distinctive brick-and-stone exterior evokes period grandeur and a sense of stately majesty. The exterior was restored to its original inviting appearance and now features new landscaping, lighting, railings and awnings, as well as new window-ledge boxes filled with seasonal arrangements. Carpet and linoleum flooring were removed to reveal the original terrazzo below, and stud walls and drop ceilings installed at one point in the building’s history were removed to showcase the original volume of the historic hotel dining space—complete with decorative plaster walls, high plaster ceilings and wood trim.

The Hamilton’s renovation and redevelopment required a comprehensive top-to-bottom rehabilitation. Mechanical, electrical, HVAC and plumbing systems were completely replaced, and every finished surface in the building required attention. The existing elevator was replaced, and era-appropriate materials, colors, and finishes were used exclusively to maintain the historic elements inside and out. Historic architectural details—from banisters and ceiling detailing to original plaster and stonework—were preserved or reproduced throughout.

As with any historic renovation where valuable federal historic tax credits are a priority, the design and development team followed the constraints of the Secretary of the Interior’s Standards for the Treatment of Historic Proper- ties to achieve a modern, functional space. For example, an earlier renovation had removed the original wood casement windows on the front elevation and replaced them with historically inaccurate, ill-fitting windows. Based on historic photographs, the windows were restored as closely as possible to the original window configuration with insulated casement windows. The original wood transoms also were restored

Exterior brick was gently cleaned and tuck- pointed. Damaged historic terra-cotta details were repaired or replaced with matching fiber-reinforced polymer castings. The front entry was redesigned based on historic photographs with a new metal canopy emulating the original design. This simplified the façade and exposed the glazed terra-cotta detailing surrounding the entry. The commercial aluminum and glass entry door was replaced with a door and sidelites matching the historic façade, and new streamlined front-porch handrails emphasize the curve of the entry steps. Wall sconces flanking the entry were chosen based on historic photos, and a second front entry (not original to the building) was redesigned with French doors recalling the original window design. Façade lights gently wash the front, and landscaping was redesigned with new sidewalk light bollards.

Former renovations, both interior and exterior, were not sympathetic to the historic character of the building. Consequently, some of the most significant design challenges—and, ultimately, design solutions—came from reversing those changes and taking advantage of the original geometry of the space.

Plumbing didn’t extend down into the original ballroom area and determining where to insert proper plumbing stacks was tricky. Several discoveries—some welcome and others unwelcome—were made throughout the demolition process, and subsequent design changes were needed as those issues revealed themselves. Adding new common areas and amenities was a priority, and creating space for those elements and identifying how to accommodate them from a logistical standpoint (such as venting for the fireplace in the meeting room) was also a challenge. Ultimately, opening the first floor by knocking down walls and removing dropped ceilings proved to solve several issues and provide the required space to create the common-room resident amenities.

Amid a dynamic urban renaissance, demand for quality residential options in downtown Detroit is high, especially in a popular neighborhood like Midtown. The building was intended to appeal to long-time Detroiters and newcomers to the city alike. To accommodate residents who had lived in the building prior to the rehabilitation, the firm worked closely with the city of Detroit throughout the redevelopment process to ensure that civic needs were addressed and the goals of the city and the immediate community (most notably, the existing residents of 40 Davenport) were met in a mutually beneficial manner.

Broder & Sachse developed an entirely new model for responsibly rehabilitating an already occupied building with assistance from Detroit’s Department of Housing and Revitalization. The development team enlisted the United Community Housing Coalition, Detroit, to execute its inclusionary housing program, supplying resources for qualified residents to temporarily relocate to appropriate units in other properties during the rehabilitation while maintaining their current rental rate.

The firm not only helped with the process of finding interim accommodations, but supported qualified residents with financial assistance for incurred expenses, including moving fees, security deposits and any differences in rental fees. Those residents then had the choice to return to The Hamilton after renovations were completed, maintaining their legacy rental rates for as long as they choose to lease in the building. The firm’s collaborative and constructive relationship with the city of Detroit was instrumental in building community trust and goodwill and in ultimately securing municipal support for valuable grants and tax abatements.

New and returning residents were welcomed into The Hamilton with design upgrades, including kitchens, bathrooms, appliances, fixtures and finishes, unique open floor plans, ceiling fans, abundant closet space, dramatic high ceilings, and walk-in showers with glass doors and custom vanities. Trash chutes were surgically added on every floor, and the addition of an exterior ramp and replacement of the original freight elevator cab ensured wheelchair accessibility.

One of the truly distinctive elements of The Hamilton is the way the property was updated in a historically sensitive manner while still creating an abundance of community spaces and high-end amenities not previously available. Because the original layout had little space for modern amenities, a first-floor maintenance room and underutilized basement were activated for tenant use with the creation of a fitness center and wellness studio. Other community spaces added include a mail and parcel center with secure package pickup, toilet rooms, laundry lounge, areas for bike storage and repair, a study room, and a pet grooming and washing salon.

Perhaps the best amenity of all is the Midtown location: The Hamilton is convenient to downtown Detroit with easy access to the highway and just minutes from Wayne State University, College for Creative Studies, Detroit Medical Center and Henry Ford Health System. Residents can walk to sports stadiums, theaters, restaurants and shopping.

Remarkably, the underlying historical character was preserved—and, in some cases, enhanced— while transforming The Hamilton into an appealing and amenity-rich modern multifamily residential property. Residents enjoy an exceptional range of amenities unlike any other Midtown location. Along with its historically significant and unmistakably distinctive period architectural detail, the combination of outstanding location, striking city views, curated lifestyle options, unmatched amenities and engaging community spaces makes The Hamilton experience one of a kind.