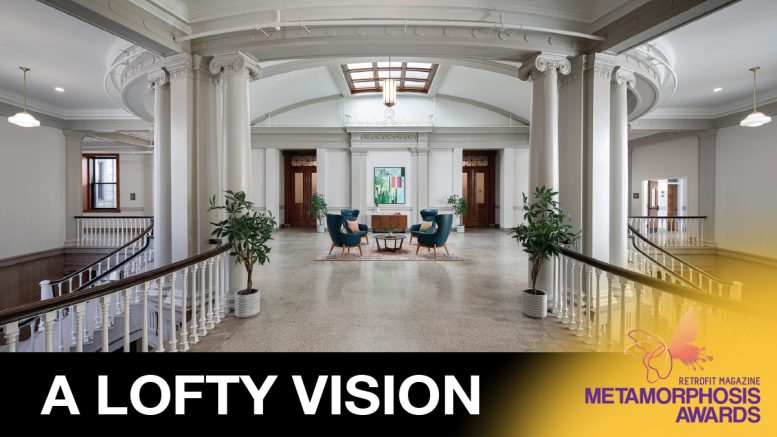 Set on a prominent corner in Worcester, Mass., the Worcester County Courthouse has been a regional landmark since it first opened in 1843. Conceived as an impressive 2-story granite structure with just a single courtroom, it was expanded over the next century through a series of architecturally distinct additions and annexes—one in 1878, a second in 1898 and finally a third in 1955.

By the time the courthouse complex was decommissioned in 2008, this interconnected group of buildings existed as a dense and dramatically underutilized labyrinth of offices, hallways and monumental landmarked spaces. For local leaders in Worcester—a resurgent former industrial city that has experienced significant population growth over the past two decades—redeveloping the property presented an appealing opportunity to accomplish two goals at once: preserve an important touchstone of the city’s architectural and cultural history while addressing an increasingly urgent need for new mixed-income multifamily housing.

Restoring this historic complex and converting it into a functional and appealing 118-unit apartment community, now called Courthouse Lofts, required a bold yet highly nuanced design vision, ultimately proving once again the enduring benefits of adaptive reuse and retrofit initiatives. When developer Trinity Financial brought on The Architectural Team (TAT) Inc. as architect and interior designer, that design vision came into focus with a simple framework: Honor the courthouse’s historic spaces while giving them contemporary utility.

Working within the confines of a landmarked property helped to set parameters for the project team. For example, TAT’s architects were compelled to preserve and restore key exterior components, including the granite façade of the original courthouse structure and 19th-century additions, as well as the glazed brick façade of the 1955 annex. Where possible, the architects also rehabilitated original exterior fenestration, though many windows, including the large storefront system at the annex entrance, had to be replaced with historically appropriate substitutes.

This same attention to historic elements applied to indoor spaces with interior landmark regulations helping to clearly define what must be preserved and what could be changed and reworked. On the National Park Service and Massachusetts Historical Commission’s “must save” list were courtrooms from each distinct era of the courthouse complex’s construction, along with the main entry spaces, circulation corridors, numerous stairs, ceilings, flooring, stained glass in the lobby and several other spatial volumes that had been left abandoned for more than 12 years.

Although comprehensive, the specificity of landmarking directives opened the door for the important large-scale architectural moves that made this irregular courthouse complex viable as a single residential community. For instance, the location and layout of the 19th century additions resulted in very deep floor plates for the main courthouse building, leaving a majority of internal spaces without the daylight access required for residential use. To bring natural light into the core of the building—necessary to meet code requirements and to maximize the number of residential units—the architects were able to create two interior courtyards by removing several non-historical infill additions. In a similar act of strategic subtraction, the architects removed a portion of the 1955 annex structure that sat between the 1878 and 1898 additions, opening the original 19th century granite façades up to the sky after 70 years and pouring natural light back into the building.

Inside, the design team faced a circulation challenge. Rather than a single unified building, the courthouse complex consisted of different structural systems appended onto each other over the course of a century and intended for a very specific institutional use with requirements often in opposition to its new residential purpose. For instance, the imperative for safe movement of witnesses and prisoners resulted in many adjacent portions of the courthouse not having direct connections with each other.

To regularize these convoluted circulation patterns and bring them up to code, TAT’s architects were able to make a case for changes, including the demolishing of a number of the complex’s original 32 stairs while restoring others for internal use within duplex apartments. Similarly, careful consideration was necessary in the highly ornate retained historic spaces as the project team installed updated mechanical and electrical systems and introduced a sprinkler system into the building for the first time.

Following these significant architectural efforts, the main interior design retrofit challenge became a question of balancing scale and character: In such a massive complex with grand balustrades, millwork and other historic detailing, how could TAT’s design team craft spaces that felt intimate and welcoming and provided functionality for modern life?

For common areas, the design solution centered on the creation of dedicated zones that help to break up the community’s large spaces and form discrete amenities. The monumental domed primary courtroom, for example, was reimagined as a resident club room with a variety of distinct uses that leverage its historic elements, ranging from a shared kitchen built into a former witness stand to media areas in the plinths that once served as seating for the courtroom audience, as well as a restored holding area behind the jury box. In the center of this space, new lounge zones and remote work settings add functionality and reduce the room’s perceptual scale. Confined to a limited number of changes in this landmarked room, TAT delineated these zones through the strategic use of millwork, furniture, fixtures and equipment instead of through major structural interventions.

In other portions of the complex, TAT’s interior design team found ways to build on the courthouse’s architectural character, adding contemporary functionality with era-appropriate design cues. The new mailroom is a perfect example: Located near the primary entrance to the 1950s annex, the space was full of mid-century character with rose-colored marble and original phone booths. TAT’s designers played off these elements, designing custom, clean-lined modernist mail infrastructure rendered in walnut. This bespoke millwork contributes to a mailroom tableau that looks as if it had always occupied the space.

HONORING THE SPIRIT OF THE PAST

Within individual apartments, TAT took an innovative approach to the mix of old and new. Thanks in large part to the irregularity of the courthouse complex’s layout, just six of the 118 units share the same floorplan. Ranging from studio lofts to large duplexes, the atypical nature of these apartments presented a challenge for the design team: Many of the units incorporated a variety of historic elements that had to be preserved, such as original stairways and doorframes, courtroom doors and intricate moldings. Other units featured a less intensely detailed, yet equally charming, mid-century aesthetic.

TAT’s design team chose to embrace the variety, approaching all 118 units with a color palette whose neutrality ensures that fixtures and finishes work as well in a structure from the 1850s as they do in one from the 1950s. In every apartment, medium wood tones and simple white cabinetry and backsplashes allow the rest of the architectural elements to play the central role in defining the units’ character. The result is that every space feels as unique and special as possible while remaining functional for contemporary life.

In an exciting twist, the courthouse complex’s large scale offered the design and development teams one more unique opportunity to honor Worcester’s heritage: On the first floor of the 1878 addition, the building features a public museum dedicated to local hero Marshall “Major” Taylor, a pioneering Black cyclist and international celebrity from the early 20th century who called Worcester home.

The existence of this important museum in a new residential community full of original details is a perfect embodiment of what makes Courthouse Lofts, and so many historic retrofit projects, valuable. By honoring the spirit of the past while addressing today’s most urgent needs, design teams can create enriching experiences for generations of end-users that are beautiful, perform flawlessly and tell a remarkable story.

WINDOWS: 451T and Glassvents from Kawneer

Philip Renzi is an associate with The Architectural Team Inc. (TAT) and Meghann Van Dorn, LEED AP ID+C, is the director of Interior Design for TAT.

A 9,000-square-foot Rectilinear Box within a Modernist Building Is Transformed into a Calming Space for Toronto’s GBTQ Community