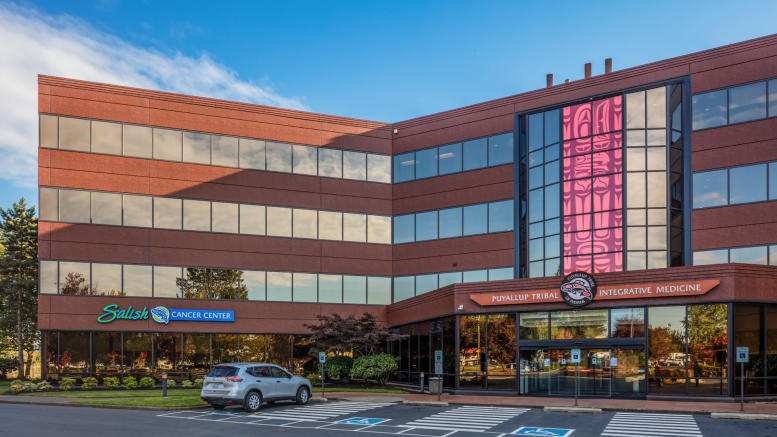 Retrofits come in all shapes and sizes. Taking existing building stock and upgrading or repurposing these buildings for new tenants or new uses can range from basic maintenance all the way to gut rehabs. Often, the scope of a project depends heavily on the condition of the existing structure. In many cases, issues with the original building can drive material and design decisions.

In the case of the Salish Integrative Oncology Care Center in Fife, Wash., the project began as a tenant improvement, but the condition of the existing building drove the scope further. The Puyallup Indian Tribe had purchased the building with the intent to develop an outpatient medical center that would include the first Native American-owned cancer care center in the nation. The goal was to serve the people of the tribe, as well as the greater community.

“We started with a TI, but it turned out the building had some serious skin issues in terms of water penetration,” recalls Kent Gregory, principal with TGB Architects, Edmonds, Wash. “That’s what got us into working on the design of the cladding.”

The building’s existing skin was a semi-structural brick cladding system, which was prone to the kind of water-penetration issues the building was experiencing.

“It is a system that was popular in the late 1980s,” Gregory explains. “It’s these jumbo bricks that span from floor to floor. They have just one line of protection against water intrusion.”

The design team considered its options for upgrading the exterior of the cancer center. Evaluations of the exterior cladding and studies of the seismic bracing of the building were conducted. One of the functional challenges the project faced was the fact that the building was occupied; the work had to take place around activity of a functioning medical center.

“When we looked at the analysis of the building, we determined we could take off the existing cladding and put something else on, but the disruption to the tenants would make things extremely difficult,” Gregory says. “We received some additional structural analysis that informed us we could put additional material on the building and it would hold up structurally, so that became our recommendation. We could leave the existing cladding in place and put insulated metal panels over it.”

This creative solution allowed multiple problems to be solved at once: Installing the lightweight insulated metal panels in a rainscreen configuration over the existing skin of the building would eliminate the moisture-penetration problems and allow the upgrade to take place while the facility remained in operation. Furthermore, the selection of insulated metal panels provided the aesthetic the tribe was seeking for this facility.

“In terms of aesthetics, the owners very intentionally did not want to make a big splash,” Gregory explains. “The Puyallup Tribe owns two casinos and those buildings really stand out. They’re trying to make a statement and tell a story. But the oncology center is on the civic side of their work, so they didn’t want to make a big visual statement.”

With the selection of insulated metal panels, the design team was able to maintain an aesthetic consistent with the existing brick building.

“The finish we used on the metal cladding is a variegated brown speckle. It looks like rust and it’s really quite beautiful,” Gregory says. “The installation went smoothly. Because it was an occupied building, there was some structural bracing and work that had to be done from the inside out. The contractor was working within tenant spaces but I don’t recall any real issues. It was a well-planned project and the contractor did a great job. When we were done, the building didn’t look a lot different and the owners are very pleased.”

Although insulated metal panels were employed to achieve a consistent aesthetic, improve building performance and create as little disruption as possible on the Salish Integrative Oncology Care Center, other retrofits involve much rougher starting conditions.

For example, what would become Unique Fitness in Holbrook, N.Y., began as a rundown office building project that had been abandoned for almost six years. Construction on the two multitenant buildings commenced in the early 2000s but was never completed. The designers at Farmingville, N.Y.-based JM2 Architecture were charged with transforming the blighted, unfinished site into a 42,000-square-foot Unique Fitness outlet.

“One of the ‘buildings’ was basically an overgrown slab, and the condition of the second building was rough to say the least,” recalls Tyler Fox, project manager at JM2 Architecture. “The site was overgrown, vandalized with graffiti and had attracted homeless people for years. However, the structure was in great condition and was one of the primary reasons we decided to keep the existing slab and steel in place for our proposed design.”

From Blighted to Sight to Be Seen

The design team had a very large structure to work with and needed a visually appealing, high-performance material that would deliver aesthetics and energy efficiency to the project.

“Before we started preliminary design, we knew we wanted a final structure that everyone would recognize, especially considering the site’s location on Veteran’s Highway and its high visibility to thousands of passersby each day,” Fox says. “Our concept was based on strength, utilizing glass, metal and stone to design a building that stood out among all the fitness centers on Long Island while providing an impressive interior that is inviting to patrons. Insulated metal panels were the perfect way for us to distinguish this structure.”

JM2 Architecture had used various types of metal panels on previous projects and decided that IMPs offered a good solution to the design goals of the project while enabling the team to meet a tight timeline.

“Using the IMP system gave us the opportunity to close the building, which allowed contractors to begin interior work sooner,” Fox says. “In addition, the number of color and profile options available gave us the ability to align the exterior design with the branding of the company.”

Along with enabling speed and aesthetics for the fitness facility, the IMP system helps the project live up to stringent local energy codes.

“We needed to provide a number of insulation and dew-point calculations to the town building department to prove these panels would work in this climate and meet its performance requirements,” Fox explains. “We took a hard look at the performance of the panels, and the wall assembly as a whole meets the requirements of the code.”

The flexibility of insulated metal panels made them a good solution for these two retrofit projects. Although each had very different origins and design goals, they aimed to achieve a certain look without sacrificing performance and schedule. Selecting IMPs helped deliver wins for the owners, contractors and designers alike.

Metal Panels Can Be Used as Screens, Fences and Gates

Be the first to comment on "A Tale of Two Buildings: The Versatility of Insulated Metal Panels Helps Retrofit Projects Achieve Disparate Design Goals"