When the trio of Victorian-era townhouses now forming the base of Toronto’s 7 St. Thomas office tower were first completed in the 1880s, they reflected a time of transformation as the city’s population grew by six-fold over the latter half of the 19th century. The 3-story homes, designed in a Richardsonian Romanesque style, were “heavily ornamented, with lots of stone and red brick,” explains Michael McClelland of Toronto-based ERA Architects, a co-designer of the project along with Hariri Pontarini Architects, also of Toronto. The townhouse design is believed to be by one of Toronto’s most celebrated architects, E.J. Lenox, who was responsible for the original City Hall and a number of local landmarks. “Toronto had a reputation in the 19th century of being a brick city,” McClelland explains. “The whole building is so well made, and that Richardsonian Romanesque style has this wonderful exuberance.” 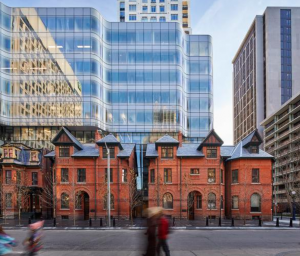 The architects juxtaposed the new architecture against the old. The 9-story tower is clad in curving glass, floating above a restored base of Victorian rowhouses.

Today this central-city location, in the Yorkville district, has become a place of tall buildings that dwarf the original townhouses. Finding the right programmatic response from a business-development perspective had to be weighed against what zoning and heritage-protection laws would allow. Compared to the rowhouses, a tower would bring much more sellable space. But if there was going to be a tower here, it would have to play nicely with the townhouses.

“The heritage homes … had to stay. That was a given. But we weren’t sure about the use for the tower itself,” explains Patrick Quigley, president of St. Thomas Developments, which developed the project. “In the neighborhood there’s a lot of high-end residential buildings. But we had to stay behind the peak of the roof line. That meant the floor plate would be narrow for apartments and condominiums. We looked at executive suite hotels, a high-end retirement home and then we came up with this scheme of the office condominium. There are only a few others that have come to market.”

At first, the team explored letting the rowhouses operate again as single-family houses after years as offices. Yet there are no other such standalone homes here anymore. That’s when it was decided the rowhouses would become part of a small tower, for which zoning already allowed. Many large building projects in downtown Toronto have negotiated with the city to change zoning to allow height, but because Quigley’s company owned the adjacent building, the Robert A.M. Stern-designed One St. Thomas condominium tower, there was a desire to not block views. Then there was the question of mixing styles. “The city was concerned about how the buildings would relate to each other,” McClelland says of the rowhouses and the tower. “It took some convincing, but I think they felt this was an appropriate response. The tower just floats above the heritage buildings, and there’s a large reveal so they’re not sitting heavily on them.”

The design did alter the rowhouses in one significant way, lowering them by a few feet so the entrances were on-grade instead of a few steps up. “If we made them serviceable for retail or offices, they had to be barrier-free accessible,” McClelland says. “We didn’t want some to come in by the sides of these buildings. That would lose the legitimacy of the street face. That was something we had to debate carefully with the city. They were concerned about the impact on the architecture. We modeled it out a few different ways. We’re pleased with how it’s been pulled off.” Although it’s a departure from the original intent, the change arguably makes sense; an affluent Victorian homeowner wants to be removed from the street, hence the stairs, but an entrance on-grade with the street is more in keeping with a commercial purpose, as well as 21st-century ideas about urban design.

Although the architects early-on explored the idea of cladding the tower in brick, they instead sought to juxtapose the new architecture against the old. The 9-story tower is clad in curving glass. “I’ve heard someone describe it as the equivalent of an emcee onstage, standing in front of the curtain before it opens,” says Michael Attard, an associate with Hariri Pontarini Architects. “Having these small offices that you move in and out of, we came to this idea of a sinuous curtainwall. Instead of hard boxes of bay windows, this could have a nice smooth line that carries across the facade. We came to think of it as a veil backdrop for the townhomes, which were really the jewel of the site. If anything, the tower was fading into the background: this simple building that floated above what we hoped to be a really beautiful restored base and a legible break line between old and new.” 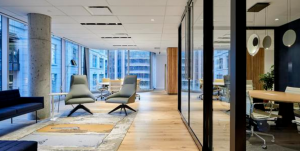 The glass tower rises 9 stories above the Victorian-era rowhouses.

The project gained acceptance with the city in part by how it was constructed. Instead of dismantling the 19th-century townhouses to make construction of the tower easier, the team chose to keep the buildings in place. What’s more, the lower floors of the townhouses retain their original, more compartmentalized configuration. “The city began to appreciate that: that they felt even from the street like real townhomes and not just a screen on the front,” Attard says. “It wasn’t just a facade treatment.”

That said, the interiors retain few, if any, of the original details or even the original structural components. “Because the heritage buildings became essentially part of the new tower, it had to be non-combustible construction,” McClelland explains. “The wood framing had to be removed. That was a significant alteration. We’d love to have left the wood, but our building code doesn’t permit combustible construction integrated with an addition that’s more than 6 stories.” In addition to the structural components, wood columns and other architectural aspects of the interior had to go. “There’s not a lot of trim left,” the architect adds. “But that does allow tenants to design their own raw space.”

That these townhouses could be stripped of most of their historic interiors reflects the case-by-case nature of the heritage designation. “It depends on the reason for designation,” McClelland adds. “Many heritage buildings have been altered over time for different kinds of uses. There weren’t any significant interiors left. But it does vary. In some projects you’ll have rooms or hallways or sets of stairs protected. In this case, what was important was the street face and how they read on the street. The standards vary, and they’re very specific to each and every building.”

Making these 1880s townhouses work for 21st-century use also means they must adapt, and thus some historical details are more important than others. Yet this pragmatic adaptability, Attard argues, is ultimately what allows them to survive. “If you take a hard line with some of these elements, especially for buildings 120- or 140-years old, you’ll completely stall development,” he says. “You’ll lose all the opportunities that the site can have. There’s always an understanding that buildings have to adapt and evolve and work within certain restrictions. But on another level, because development is surrounding us more and more, there’s this fear of losing too much of our heritage fabric, as well.”

That’s why despite the fact that a glass tower rises 9 stories above these Victorian-era rowhouses, the smaller, older structures more than hold their own. “From the get-go, the star of this project has been heritage,” Quigley notes. “We wanted to complement it.” 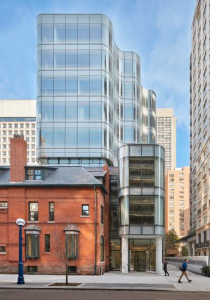 The Victorian rowhouses have been transformed into office condos available for purchase.