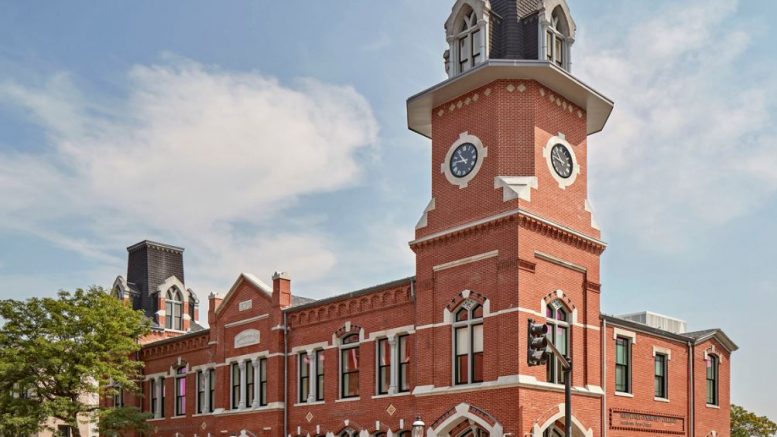 The railroad depot opened in 1876 and was supplanted by a larger terminal 20 years after opening. As the 20th century dawned, the building became a telephone exchange, theater, movie palace and, finally, a bowling alley. Through these transitions, it lost its impressive clocks, towers and cornice detailing and, after a 1980s fire, its tenants. After sitting vacant for years, MCC acquired the building. The college recognized a tremendous opportunity in downtown Lowell, both in its buildings and its underserved community’s needs. Searching for a home for its long-awaited performing arts center, the college identified new life for the unique depot building as the place for its theater, dance and music departments.

The design challenges of the project were many: The proposed program far exceeded what the existing building could hold. The building’s age and three-decade vacancy took their toll. Daylight streamed in through holes in the brick wall; the roof and windows let the elements in; birds made their homes within; and the masonry’s overall integrity was substantially degraded. Given its historical importance as a gateway to the city and the desire to preserve its presence at Towers Corner, expansion opportunities were limited for a building sitting atop bedrock with almost no site beyond its footprint.

The design for the new center needed to address these challenges while creating an expressive and identifiable home for the students who would bring it back to life. It needed to be program efficient—making new space within the existing building and a careful addition on a sliver of land next to the building—to preserve the original prominence. Structurally, the solution had to go beyond retrofit and embrace the existing masonry exterior’s qualities. Architecturally, the building needed to transcend restoration and express its new use and role in the community. The resulting crafted modern insertion locked with the original building meets these goals.

The completed design accommodates a proscenium theater, music recital hall and dance studio in a simple ovoid shear-wall volume—essentially an “egg” theater— inserted within the 1876 brick shell. The theater’s shape is metaphorical, symbolizing the building’s rebirth and the burgeoning talent of student actors, dancers and musicians. The new insertion’s curved shape serves as the structural core of the building, supporting new spaces and buttressing the restored and reconstructed historic envelope.

Before Photo: LOWELL HISTORIC ARCHIVE and After Photos and Images: LEERS WEINZAPFEL ASSOCIATES

There was no extra space onsite, and nearly all construction work occurred from within the building. The “egg” that became the structural core rose from footings pinned to bedrock, block by block, like the historic masonry façade had 140 years previously.

The “new” is placed in an interconnected balance with the historical, revealing the life inside the building to differing degrees, depending on the time of day, the tenor of activity and the viewer’s position. The addition’s service towers are clad with custom-perforated imagery that highlights the historical and renewed performances within. The wood-paneled “egg” is revealed through the unexpectedly diaphanous façade. The reinstalled tower clocks have an ingenious secret—as day turns to night, the historical details recede, and the façade becomes a frame. The clocks invert and shine like beacons. The volume within glows in stark relief, highlighting the students’ place and inviting the community.

Its outside curve, clad in maple-veneer panels, allows for circulation from the building’s ground floor public lobby front to its academic back. Viewed through the center’s generous sash windows, the egg form delivers a sense of drama illuminated by programmable LED lighting, the color of which can be changed to reflect the mood of the evening’s performance or community events.

On the second floor, the recital hall and dance studio take advantage of the center’s high roof. Along the sidewalk, a linear gallery and lobby display student activity and invite the public through the main entrance at the base of the building’s landmark clock tower.

The new performing arts center is more than reimagining a historic train depot in Lowell. The jewel box with an egg-shaped space inside is an architectural feature and a pivotal inflection point in this postindustrial city’s rebirth.