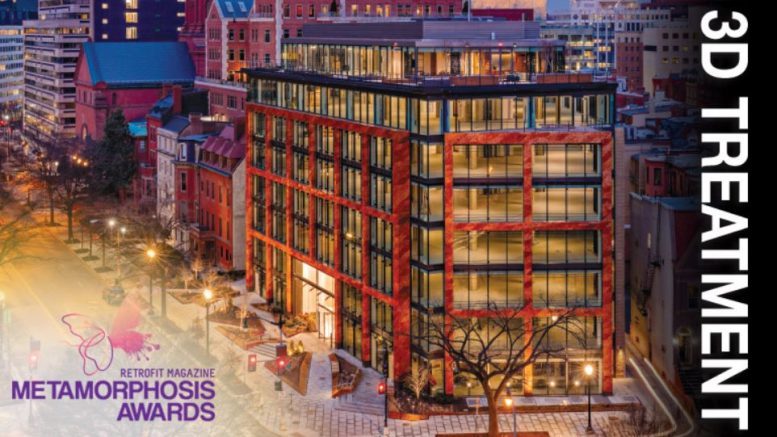 A range of building types with unique identities inhabit Washington, D.C.’s historic central business district—from a sequence of townhomes and commercial buildings to the copper-domed St. Matthew’s Cathedral. When the district’s 1970s YMCA was put up for sale, an opportunity arose to reinvent the structure in a way that ties together the neighborhood’s diverse architectural fabric. Now premiere office space, the 7-story, 104,000-square-foot building at 1701 Rhode Island Avenue NW brought new vibrancy to the district and earned acclaim as a Metamorphosis Awards Transformation winner.

AFTER PHOTOS: Alan Schindler and BEFORE PHOTOS: Hickok Cole

The former YMCA sported a nearly windowless brick façade, which required a complete transformation for an inviting speculative office space. Architects at Washington-based Hickok Cole were intrigued by the challenge of creating daylight and views while still fitting into the historic district. Their design replaced the exterior brick with glass and focused special attention on exterior detailing. “We were intrigued by the beauty of copper and our client was attracted to the way it paid tribute to the cathedral’s dome,” recalls Hickok Cole’s Project Designer Stefano Sani. “Copper allowed us to build a contemporary narrative to the district’s context.”

Hickok Cole selectively set back portions of the façade to scale down the building’s volume. The design also took advantage of the adjoining 40-foot sidewalk to project a shingled copper frame 18 inches off the glass façade, evoking a three-dimensional experience with depth and shadows.

“We went to Italy to experiment with the materials and patterns on the shingles,” Sani remembers. ”We were like grown-ups playing with a children’s chemistry set.” Working with manufacturers, they developed a complex pattern by using an acid bath on 5-foot-wide copper shingles. Each shingle’s finish is similar but never identical, making the constantly shifting geometry reminiscent of a snake’s skin. Once the pattern process was defined, they gave a green light to the manufacturers to individually hand-treat 1,700 shingles. Then, a nano-ceramic coating was applied to the shingles that significantly slows their oxidation process to preserve the richness of the copper hues.

After arriving in the U.S., the flat shingles had to be bent and formed into the copper frames sequentially, from the bottom right corner to the top left corner. “We needed a customized interlocking installation to achieve the right pattern, which required a lot of advance communication and coordination,” explains Project Architect Jason Wright of Hickok Cole. “When you’re pushing the limitations of materials and fabrication capabilities, never underestimate the amount of time it will take. It’s critical to engage the subcontractors as early as possible to ensure a smooth construction process.”

To differentiate the glass inside the copper frames from the rest of the façade, designers introduced a filigree of black metal rods and bars.

“I believe it’s one of the most significant contemporary examples of applied arts and crafts in a major scale to a commercial building,” Sani says. “These details build an appropriate sequence of scale, both from a distance and standing directly under the copper frame.”

The effect has a strong visual impact. According to Metamorphosis Awards judge John J. Noonan, retrofit editorial advisor and vice president of Facilities Management at Duke University in Durham, N.C., “The most impressive aspects of the project were the transformation of the exterior wall system and skin and the use of material on the exterior, as well as the interior.”

In addition to designing a market-enticing presence for the speculative office building, the team had to carefully preserve major portions of the building’s structural elements to align with the city’s zoning requirements. “We carved and sculpted the building to fill in the pool, racquetball courts and gym, to make them viable for office use,” Wright says. “It was a balance between what to demolish and preserve while remaining economically feasible.”

The original brick façade brought structural benefits to the renovation. During construction, the brick’s mass provided enough bearing pressure to keep the footings in place while the team removed the below-grade pool deck and installed an underground parking garage. In addition, because the net weight of the structure was actually less once the brick was removed, the footings did not need reinforcement to accommodate two new 13,000-square-foot office floorplates.

“We had a lot of detailed conversations with our structural engineers during design to streamline the work,” Wright says. “The schedule to get to market was aggressive, and all the shoring and underpinning that we didn’t have to do in the end reduced the timeline and eliminated costs.”

Hickok Cole moved the lobby from the corner of the rectangular building to the center of its long span. There, a 2-story volume bridges the interior and exterior through a “cube” of perforated metal. Inspired by Washington’s predominant cherry-blossom trees, the perforations form an organic motif. A white surface behind the cube allows light to bounce back and shine through the pattern, and a controller can animate the colors of light in the perforations. Each face of the cube is angled in different ways, casting an interplay of light and shadows.

At the lobby entrance, designers specified a more transparent, low-iron glass and a structural glass fin system to support the double-height volume without obstructing the view of the cube from the outside. “The cube became a beacon of the lobby itself and expresses its presence outside in the evenings,” Sani says. “As we sourced the other materials for the lobby, we wanted the space to be warm but uncluttered and create a highly sophisticated, calm showcase for the cube.”

Honed Moca Creme Portuguese limestone lines the main lobby walls. The pieces of stone are tailor-cut with angled joints between the panels; the effect recalls the copper frames outside. An acid-treated blackened steel panel system covers one wall to integrate with the black elevator panels and provide a striking counterpart to the luminosity of the cube.

Sycamore wood above and below the cube defines the reception area, lending warmth to the spaces where people gather, including the reception desk and lobby bench.

“What was once a cold and uninviting building is now bright and welcoming to its occupants,” notes Metamorphosis Awards judge Nathan M. Gillette, retrofit editorial advisor and director of Natura Architectural Consulting in Grand Rapids, Mich.

Hickok Cole dismantled the gymnasium hardwood floor and repurposed it as a wall cladding for the building’s new fitness center, preserving the old floor marks on the wood as an homage to the YMCA’s legacy.

A Variable Refrigerant Flow (VRF) system for air conditioning helped achieve two impressive goals. By eliminating the need for a cooling tower, the VRF system freed up a significant amount of space on the rooftop. The penthouse became 7,735 square feet of rentable space and the designers added a setback to offer a coveted rooftop terrace with a stunning city view.

VRF also lowered the building’s energy consumption to such a great extent that it helped 1701 Rhode Island Avenue NW receive a LEED Platinum award. The building’s distinctive character, sought-after amenities and LEED Platinum designation proved highly valuable in terms of market acceptance. The building was leased shortly after completion and recently sold at an exceptional price.

“Our philosophy was to always emphasize different scales to keep the relationship between the viewer, occupant and material surfaces engaging—both inside and out,” Sani says. “When exploring unique solutions, test and prototype as much as possible but never surrender in the face of resistance. In the end, there’s so much pride in the building and everyone’s hard work was rewarded by the market. The result was worth the effort.”

Two Historic Buildings Set the Tone for a Redevelopment in Westport, Conn.

Be the first to comment on "A YMCA Is Creatively Adapted into Office Space, Adding Vibrancy to Its Neighborhood"