Can an entire town be retrofitted? New England’s small industrial cities have offered an opportunity to test the premise. Many have foundered during the past few decades; as mills and factories are shuttered, local economies suffer and urban blight and decay set in. Likewise, property values fall, reducing municipal revenues and leaving local governments hamstrung.

Lowell, Mass., is a perfect example. The town is the setting of the recent film “The Fighter”, in which a working class family copes with hard times and one son’s struggle with drug addiction. Lowell’s beating heart was for many years Boott Mills, a cotton and textile campus occupying a large and prominent spot on the Merrimack River just two blocks from the city’s downtown. Its Italianate structures date as far back as 1835.

After years of decline, however, manufacturing ceased in 1958, and the entire campus and its 1,000 or so windows went dark. To many, it seemed like a fatal blow to Lowell. But thanks to developers with vision, crucial tax incentives for historic preservation, and modern retrofitting strategies and methods, Lowell has emerged as one of many gateway cities in the Northeast enjoying a rebirth. The restoration and adaptive reuse of the mill buildings themselves are cornerstones of this multi-decade project. While it is a useful model for preserving industrial buildings as part of a larger urban revitalization strategy, it also is unique in several important ways. 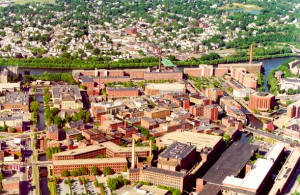 Thanks to developers with vision, crucial tax incentives for historic preservation, and modern retrofitting strategies and methods, Lowell, Mass., has emerged as one of many gateway
cities in the Northeast enjoying a rebirth. PHOTO: Lowell Department of Planning and Development

In some ways, Lowell was lucky. Boott Mills’ dormant campus escaped fire (many abandoned mills and factories do not), and in the late 1970s the campus became a major component of the Lowell National Historical Park, a U.S. National Park Service (NPS) site. The park includes a museum on Boott Mills’ campus dedicated to its story of the industrial revolution; construction spanning seven decades; and the famed “Lowell Mill Girls”, a group of laborers who eventually formed the nation’s first women’s workers union.

NPS’ presence presented its own challenges to developers, though, as a premium had been placed on the historical significance of the complex. The gabled roofs, clock tower, smokestack and other brick façades needed to be fastidiously preserved as part of the redevelopment.

Phase One of Boott Mills required a comprehensive rehabilitation strategy for these iconic features to accommodate conversion to multifamily housing. Boston-based WinnDevelopment led a project team that included environmental and community groups and NPS itself. The developers selected The Architectural Team (TAT), Chelsea, Mass., in 2003 to spearhead the exterior restoration and fit-outs of five mill buildings (see the site plan, next page) for 154 units of rental apartments, under the direction of project manager Nick Kane, AIA.

The structures on the campus had been damaged by a window-shattering gas explosion across the river and lightning strikes to the smokestack, as well as the usual forces of time and weather. Plastic and wood used to replace blown-in windows failed to repel moisture, eventually leading to rot and deterioration. Simultaneously, the 25-year-old roof timbers suffered ongoing decay and infestation by wood-eating microorganisms. TAT’s design plan would have to address making enormous factory buildings habitable and preserving iconic architectural features.

TAT’s surveys revealed the buildings’ first-floor levels were 11 inches below the 100-year flood plain, an issue most mills share because they were built along rivers in a time when flood plains were not widely understood. The remedy called for a structural fill, compacted to raise the floors with a new finish concrete slab on top.

Two Dilapidated Structures Are Transformed into a Vibrant Environment for Working and Living in Boulder, Colo.