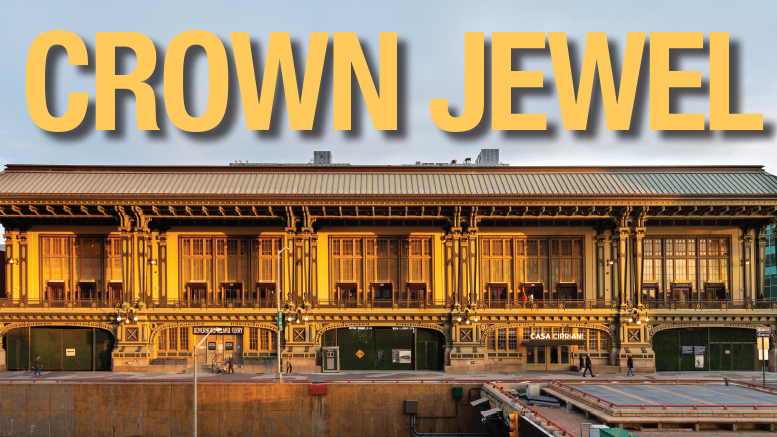 Built in 1909, the Battery Maritime Building, or BMB, was once the crown jewel of lower Manhattan’s working waterfront. Over time, the ferry building served a variety of uses and experienced several changes of hands before standing vacant and nearly crumbling into the East River. The effort to save this magnificent structure spanned 18-plus years and involved real-estate developers Midtown Equities and Centaur Properties, along with hospitality giant Cipriani. Following a major restoration from inside out, the team opened Casa Cipriani, a boutique hotel, private member club and event space, with great fanfare in December 2021.

Work on the project began in 2007, when the New York Economic Development Corp. (EDC) sought to redevelop the property as part of its restoration and transformation of New York’s historic waterfront. What followed was a dedicated effort to preserve a storied architectural landmark through creative adaptive reuse, collaborative public/private partnerships, and dogged persistence.

The Battery Maritime Building’s commanding position at the tip of lower Manhattan, and its use as
a boat landing for commerce and transportation, tells the story of New York City, an archipelago of islands with approximately 520 miles of coastline—more than Los Angeles, San Francisco, Miami and Boston combined. In the early 20th century, ships of all sizes and uses teemed the city’s waterways, and economic activity focused along the shores. Ferries offered an ideal mode of transportation to Manhattan and provided an essential connection for areas not yet served by mass transit. In 1904, New York maintained and operated some 147 ferryboats in its waters.

Noted architects Walker & Morris were tasked with creating the Municipal Ferry Terminal, as BMB was known then, after the city’s establishment of the Municipal Ferry system in 1905; the facility was constructed by the Department of Docks and Ferries. Characterized for its majestic Beaux Arts Structural Expressionist style, popular in New York’s Gilded Age, BMB shares a lineage with other remarkable civic landmarks built in the same period: the Williamsburg, Manhattan and Queensboro Bridges; New York’s subway system; and the original Pennsylvania Station.

The visionary architects sought to design a space that reflected the ambitions and power of the growing city. BMB highlights include structural rivets and trusses used decoratively, possibly influenced by the Eiffel Tower and buildings made for the French Exposition, as well as ornate and bold embellishments of scrolls, rosettes, inset panels and brackets, along with nautical-inspired detailing. The goal was to create a grand and welcoming arrival experience, elevating the daily commute of thousands of ferry riders as they entered the city, transitioning from the water to the busy streets. Original plans called for a sweeping seven-slip facility, but the scheme was never realized: Slips 1 and 2 were folded into the now lost Whitehall Ferry terminal; slips 5, 6 and 7 became BMB while connecting slips 4 and 5 remained unbuilt.

Beginning in the 1950s, with the rise of the automobile, ferry service throughout lower Manhattan and other parts of the city declined. BMB, no longer a primary source of transport, fell into disrepair. Originally, the facility was operated and maintained by the Department of Docks and Ferries and then transitioned to the Department of Marine and Aviation before falling under the oversight of the Department of Transportation. Uses for the space ran the gamut—as a men’s shelter and then for storage and administration before ultimately being vacated.

Marvel to the Rescue

Despite deterioration, poorly executed additions and deferred maintenance, in 1966, the building was designated a City Individual Landmark by the New York City Landmarks Preservation Commission (LPC). The following is a remark from LPC’s designation report, “Viewed from a ferry boat approaching the tip of Manhattan, the monumental arched openings of the Municipal Ferry Terminal at the mouth of the East River appear like three tunnels opening into the canyons of the city.” Then, in 1976, it was listed on the National Register of Historic Places.

Interest in lower Manhattan’s waterfront surged in the 1990s. Efforts to expand and revitalize the area increased, not as a place for industry—as in the past—but, rather, for residential and recreational uses. In 2000, EDC recognized the urgency of the building’s disrepair and engaged Jan Hird Pokorny to restore the exterior envelope and roof. However, the non-historic fabric remained untouched, and the interiors were gutted entirely. In 2007, Marvel helped secure an RFP by EDC seeking a private developer to complete the exterior and restore the interior for new uses. Marvel began work on reactivating the building in 2008 for a new type of economic engine. The firm’s design garnered agency approvals, meeting strict historic and environmental requirements with building and construction commencing. However, during the process, the project changed developers several times and stalled for many years.