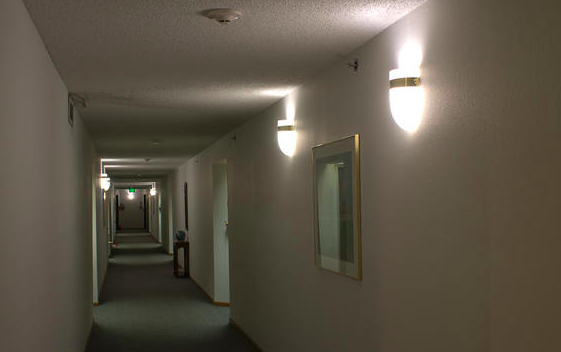 After an upgrade to 11.5-watt LED Engines, the building's corridors have uniform color and improved color accuracy. In addition, energy consumption has been cut by more than 50 percent on the hallway lighting. Photo: TerraLUX

Innovative building products, sustainable practices and attention to detail generally aren’t the first thoughts that come to mind when one thinks of affordable housing complexes, but that’s exactly what the Longmont Housing Authority (LHA), Longmont, Colo., focused on when retrofitting the Village Place Apartments five years ago.

Originally constructed in the 1990s, the LHA purchased the 47,000-square-foot building in 2005 with the intention to upgrade major systems and transform it into affordable housing for low-income seniors. The authority pays the utility costs—the residents just pay the rent—making it advantageous to upgrade to efficient systems that would save money in the long run. 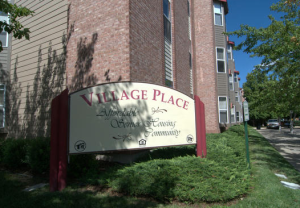 Marv Counts, project manager with LHA, oversaw the entire retrofit, which was completed while all 72 affordable housing units were occupied. Various upgrades included replacing the old boilers with newer 87 percent efficient models to reduce gas consumption and heat the building and water more efficiently. “We even reduced the number of boilers,” he recalls. “Originally we had five boilers and utilizing more efficient models allowed us to reduce the number to three. We also insulated all the exposed pipes we could in the mechanical room and down the first-floor corridors to keep in as much heat as possible.”

New solar panels, installed when the roof was replaced, pre-heat water from 50 F to about 100 F. Water temperatures need to be at about 180 F for the boiler, so LHA needs to use gas resources to heat the water only 80 degrees, rather than the 130 degrees it would have had to without the solar panels. Because of the flat roof and the way the building façade is designed, very little of the solar panels jut up from the roof from street view. Rooftop heating and cooling units also were replaced and additional return and supply air ducts installed. The new boilers and solar panels saved approximately 30 percent on gas usage, according to Counts.

LHA opted to replace the appliances in all 72 units with ENERGY STAR-rated appliances and also installed through-wall air-conditioning units. Appliances were replaced on an ongoing basis for eight months. “We also tried to reduce the water usage by changing out all the showerheads throughout the building to low-flow showerheads and low-flow toilets,” Counts says.

Village Place Apartments also experienced a lighting upgrade. “We went from predominately incandescent bulbs to, at the time of the retrofit, CFLs, and most recently we changed a lot of those to LEDs and hope to see some savings there,” Counts says. “Right now, we can’t really tell how much savings there are. However, my property managers informed me utility costs recently went up and, with the use of the LEDs, our monthly costs have remained fairly stagnant. It’s definitely worth the investment.” 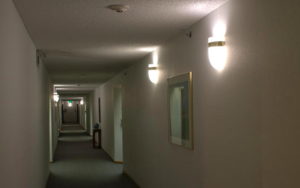 After an upgrade to 11.5-watt LED Engines, the building’s corridors have uniform color and improved color accuracy. In addition, energy consumption has been cut by more than 50 percent on the hallway lighting. Photo: TerraLUX

Because of the full occupation during retrofit, scheduling each facet of the project so as not to inconvenience the residents was a complex endeavor. “We took the boilers offline during the summer and although there were some interruptions to domestic hot water for periods of one day, at no time were the residents totally out of hot water for a 24-hour period,” Counts recalls. The roof was replaced and solar panels installed during the summer, as well.

The construction team removed the siding in January to start with the façade replacement. The 3-story building exterior previously was clad primarily in vinyl siding. “We took it off, wrapped the entire building with a water barrier then used pre-painted fiber-cement siding,” Counts says. “We’re not anticipating having to paint it for another decade.” Parts of the building not covered in siding are brick. The team also added a canopy over the entrance to protect the tenants coming and going from the adverse winter weather Colorado often experiences.

“The visual transformation of the building was pleasing,” Counts adds. “It’s very visible on the main street in Longmont, so if we were going to spend this kind of money we wanted it to look nice, as well as mechanically function better.”

Design was a collaborative approach between a local architect and in-house within LHA. “We had a local architect we used and there was a lot of compromising from the original design with the funds we had available,” Counts says. “We came up with a plan that worked really well and kept costs very reasonable. I acted as the general contractor. I worked with various subcontractors and did basic scheduling to make sure people weren’t falling over each other and each sub did his job right. It was very interesting.”

LHA talked with the residents before construction to alert them about the project scope and assure them LHA would work to inconvenience them as little as possible. “I was onsite about six days a week to ensure everything went as well as it did,” Counts remembers. In full, the retrofit took 12 months.

Lobby changes, including a fireplace and updated bathrooms, created some dust in the air, which Counts says was a concern of seniors because of the potential for excess dust to cause respiratory problems. In response, the team screened off those areas to contain particulates as much as possible. 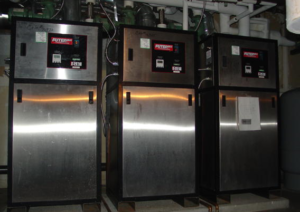 Counts and LHA are happy with the energy savings. “On a monthly basis, it doesn’t add up a whole lot,” he says, “but it does throughout a year. Payback will take a while but we did get some credits from a local utility company, which eased construction costs. We’re still happy.”

The project budget was about $1 million. “If you break it down to individual units and the major systems we replaced, the cost isn’t really that outrageous,” Counts says.

“That’s basically the idea with many of our older buildings—keep costs down as much as possible,” Counts continues. “We feel like all those improvements were worth the money spent. They were systems that needed to be replaced anyway just because they had reached their life cycle. We chose items that were as energy efficient as possible.”

The first year after the retrofit saw a 30 percent savings in natural gas, 31 percent savings in electrical and 8 percent savings in water use. Looking forward, Counts says most work going into the building in the next decade will be standard maintenance, such as replacing carpet and repainting. “After that decade period, we’ll probably be looking at replacing appliances; that might be one of the first things to fail.”

LHA has approximately 400 units spread through seven buildings in Longmont and is adding to its portfolio. “We will continue to pick energy-efficient products as much as possible,” Counts says. “We’re very proud of our portfolio and the way the buildings perform.”

Seeing the anticipated savings turned into a reality was extremely rewarding for Counts and his team. “With a lot of this, when you put pencil to paper you’re anticipating some savings and sometimes it happens and sometimes it doesn’t,” he says. “In this particular case, I was really happy to see our efforts were worth it.”

The Longmont, Colo.-based Longmont Housing Authority opened a new 50-unit low-income senior housing building in January. The new building features sustainable practices tested in LHA’s retrofits of existing buildings, like Village Place Apartments. “That new construction allowed us to do even more energy-efficient design because it was ground up,” says Marv Counts, LHA project manager. Features include in-floor radiant heat, which provides greater comfort than baseboard heat for the tenants and allows the building to run its boilers at a lesser heat. Because the industry has evolved so rapidly in the past five years, Counts says, the boilers in the new facility are even more efficient than the ones at the Village Place Apartments. The complex is illuminated with LEDs on the interior and in the parking lot. Construction crews utilized 2 by 6s with 2 inches of insulating foam, then fiberglass insulation to fill the void and increase R values. Energy-efficient windows and a sloped roof with R-48 insulation in the attic also made the building more airtight. Appliances, toilets and showerheads also are efficient. “A lot of that was scheduled due to the insight we learned from the Village Place,” Counts asserts.