Tankersley notes ECO Modern Flats would never have become a reality without its notable team. “We had an uncharacteristic team,” he says. “There were a few contractors at the table, myself included, and architects and a landscape architect. We all sat down and nobody was right or wrong. It was about hashing this out to come up with the best possible project we could. It turned out really well.” 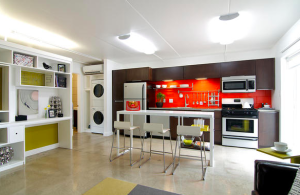 Before the team started work, it tested ideas on a single unit to see how they worked. PHOTO: Adaptive Creative

Although reusing the existing apartment buildings saved significant resources, it also presented lofty challenges. Tankersley recalls working in some buildings while others were occupied. “There were some logistics there to keep everybody safe and keep the process efficient with keeping timelines and schedules,” he says.

However, Hudson notes working with multiple buildings meant a greater ability to perform testing. “Before we got started, we tested our ideas on a single unit to see how it worked,” he says. “Next, we remodeled one entire building to learn what worked and what didn’t. We then applied those lessons to the remaining three buildings as we completed the project. This really limited the number of mistakes along the way.”

Each one-bedroom, 600-square-foot apartment is insulated with closed-cell spray foam insulation. The dividing walls between each unit are structural concrete block, which enabled the floor plan in each unit to be opened because no interior walls were structural. “What’s really neat about these units is they’re isolated from each other,” Tankersley says. “We’re controlling all the air coming in and going out of each unit. We have a certain number of air changes per hour for each unit for the health quality of the air, and we can control that. The mini-split units we used bring fresh air in and heat and cool.”

Polished concrete floors and zero-VOC paint contribute to good indoor air quality inside. “Everything is very clean. There aren’t a lot of materials that are doing any real offgassing or collecting dust and other allergens that would impact IAQ,” Tankersley says. 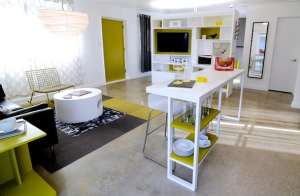 The team chose materials that do not offgas or collect dust and other allergens. PHOTO: Adaptive Creative

Between the closed-cell insulation in the walls and low-E windows, ECO Modern Flats attained an R-value of 24 in the walls. In addition, the roof contains polyiso insulation and a reflective thermoplastic polyolefin membrane to mitigate heat gain.

The units are so well insulated, in fact, that when the project team conducted a 60-day check on each unit, one of the lower-level apartment’s mini-splits was malfunctioning. “The client didn’t even know it wasn’t working because the apartment was holding its temperature at 70 F naturally,” Tankersley recalls.

The Importance of Transparency with Environmental and Health Product Declarations