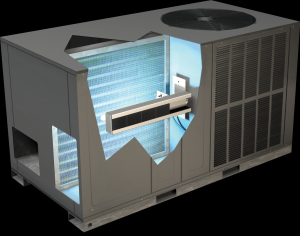 The New Berlin, Wis.-based, 10,000-square-foot facility, which accommodates up to 125 dogs and cats in individual luxury 3- by 5-foot to 6- by 8-foot guestrooms complete with glass doors and beds, strategically incorporates cutting-edge odor control in its entrance area’s unique guest check-in, grooming and gift shop areas. “The sense of smell influences a customer’s first impression upon entering a pet business” says Nina Race, president of Spa Paw and Tail. “Bad odors give the impression an establishment isn’t clean, even though it might be spotless from a sanitation standpoint.”

Consequently, odor control is part of Race’s comprehensive attention to detail that helped put Spa Paw and Tail on local WISN-TV’s Business A-List the last four years. The five-year-old business has also won a Milwaukee Magazine Reader’s Choice Award in the “Pet Establishment Category” and was named the 2013 Business of the Year by the New Berlin Chamber of Commerce. “Since installing the air-purification equipment in our HVAC equipment, greeting and gift-shop odors have been eliminated,” Race notes.

Race’s first attempt to curb odor by introducing more outdoor air through the HVAC systems was successful, but too costly in energy. Typically economizers, which are adjustable outdoor air openings inside HVAC systems, are calibrated based on ASHRAE Standard 62 “Ventilation for Acceptable Indoor Air Quality.” The standard’s criteria is adopted by most commercial building operation codes for indoor air quality. It mandates a minimum 10 to 15 percent outdoor air must be mixed with the remaining 80 to 85 percent energy-rich indoor air recirculated by the HVAC systems.

The 45-year-old Action Heating, which is a certified contractor under the federally funded Milwaukee Energy Program (Me2) that helps commercial businesses reduce energy use, suggested cutting the facility’s exorbitant energy bills by installing air-purification devices on the HVAC coils. Instead of 100 percent outdoor air that must be expensively heated, cooled and/or humidified, the addition of air-purification devices allows for a return to the conventional outdoor air proportion of 15 percent. Meanwhile, the air purifiers eliminate odors and contaminants as the indoor air is recirculated through the HVAC systems. 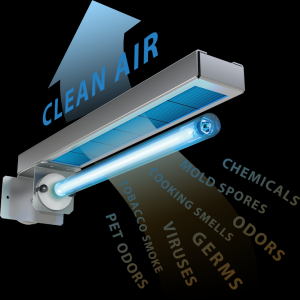 The air-purification systems handle more than VOC odors, however. Aside from activating the PCO process, the UV light also kills all types of airborne microbes as they recirculate through the HVAC system.

The gas-phase portion uses activated carbon-based media to adsorb and hold VOCs, such as animal odors, through a chemi-sorption process. The PCO process converts the adsorbed contaminants into harmless carbon dioxide and water vapor through a chemical reaction caused by UV light shining on the titanium dioxide-infused carbon media.

The air-purification systems handle more than VOC odors, however. Aside from activating the PCO process, the UV light also kills all types of airborne microbes as they recirculate through the HVAC system. For example, health-care facilities use UV systems to kill airborne infectious diseases such as tuberculosis, influenza and pneumonia. Therefore any common canine infections, such as kennel cough or infectious tracheo-bronchitis, are also killed by the UV light irradiation. “We’ve never had health issues at our facility, but the incorporation of UV as an infection deterrent is a nice back-up,” Race adds. 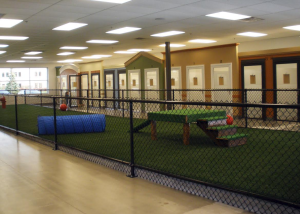 The result of meticulous sanitation routines and the incorporation of air purification at this “pet hotel” results in an IAQ that’s better than some human hotels.

While the entrance area’s odors are gone, air purification in the 5,500-square-foot guestroom and indoor pet play area isn’t completely void of pet odors yet, although it’s much more bearable than before, according to Race. Even though it’s cleaned and sanitized twice daily, the area has a continual source of odors from newly arrived guests awaiting washing and grooming. Furthermore, Petkus says the former warehouse’s basic supply and return ductwork layout isn’t ideal for the number of room air changes and ventilation distribution needed to utilize the air-purification systems’ full capabilities.

The result of meticulous sanitation routines and the incorporation of air purification at this “pet hotel” results in an IAQ that’s better than some human hotels.

How to Slay Energy Vampires

ASHRAE Recognizes Outstanding Achievements and Contributions by Its Members

Be the first to comment on "Air-purification System Controls Odors, Reduces Energy Bills"