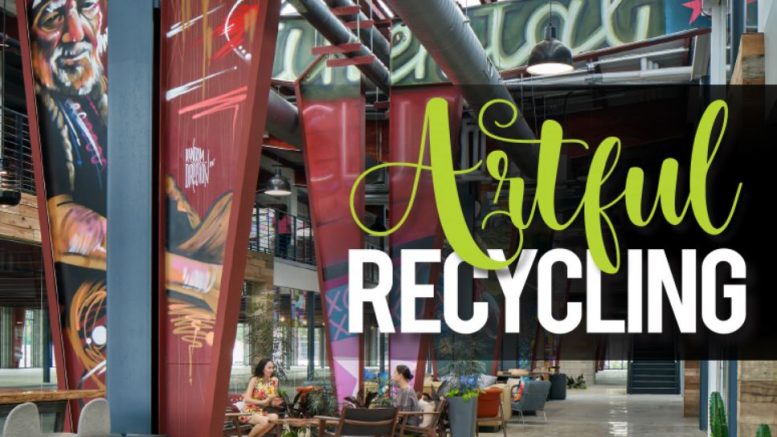 Each year in the United States, hundreds of old warehouses are lovingly renovated and given new life: as offices, art galleries, restaurants. Often with steel-framed windows, skylights, thick masonry and concrete floors, old-school warehouse aesthetics are a big part of the appeal. But those buildings overwhelmingly tend to have been built in the early 20th century, before World War II.

What happens when somebody decides to renovate a not-so-glamorous industrial building dating to 1972? What if it’s a former recycling plant that has been vacant for a decade and has been referred to as a shed, not even attaining the “warehouse” status?

For the UPCycle project in Austin, Texas, and developer Curt Kremer of Denver-based EverWest Real Estate Investors, the decision to renovate instead of tear down and build new was still about authenticity, which meant recycling a recycling center that nobody loved—including a whopping 95 percent of its construction materials— and surprising people with what was possible.

“To me rehabbing an old brick warehouse is low-hanging fruit,” Kremer says with a laugh. “They’re expensive because the vision is easy to see.” With less durable and beautiful materials, industrial buildings from the ’70s and ’80s are a more difficult challenge, but their authenticity can still come through. “We really loved the East Austin area and it was getting heavily gentrified. We wanted to do something that fit with the existing aesthetic,” explains Kremer, now a managing partner with Scottsdale, Ariz.-based developer George Oliver Cos. “We didn’t want to do something that just looked nice and pretty because the neighborhood didn’t love that. We love it when people say ‘we would have torn that building down’.”

The facility, with a floor plate of more than 60,000 square feet and comprised of two prefabricated steel-framed buildings side by side, was originally a manufacturing and shipping facility for drywall. It was later purchased by Balcones Recycling and converted into a recycling center. Yet after the recycling company changed locations, the building sat vacant for more than a decade. It became a kind of blank canvas for graffiti artists who tagged the building inside and out, especially its interior Y-shaped steel columns.

“I started to fall in love with some of the grittiness of the existing materials in the building: the big moment frames, the open spans,” Kremer remembers. “We kind of wanted to just live inside this building with the spray paint. We just had to figure out how to make it look like an office building on the interior and not lose the gritty aesthetic of it.”

To the architects in the Austin office of Gensler, which is best known for large-scale new-construction projects from airports and office towers to convention centers and hospitals, UPCycle was a blank canvas of its own: mostly just a row of steel columns in the middle and a corrugated metal roof. “It was a big column-free space with a nice high volume,” recalls Gensler Senior Associate Travis Albrecht, UPCycle’s project manager. “We wanted to maintain it as much as possible but transform into an office environment: perimeter windows and daylight in the middle.”

Albrecht and his Gensler team made the meeting point between the conjoined buildings a central public area, adding a bank of clerestory windows to the roof. “We realized that spine where the moment frames come together was going to become the most important part of the building,” Albrecht says. “That was our one big move that was additive to the overall structure and form. Because it sat in the valley of those gable roof forms coming together with the frame, it was a chance to bring the daylight into the middle, which used to be the darkest point of the building.”

Be the first to comment on "An Abandoned ’70s Industrial Building Becomes an Office Full of Color, Light and Character"