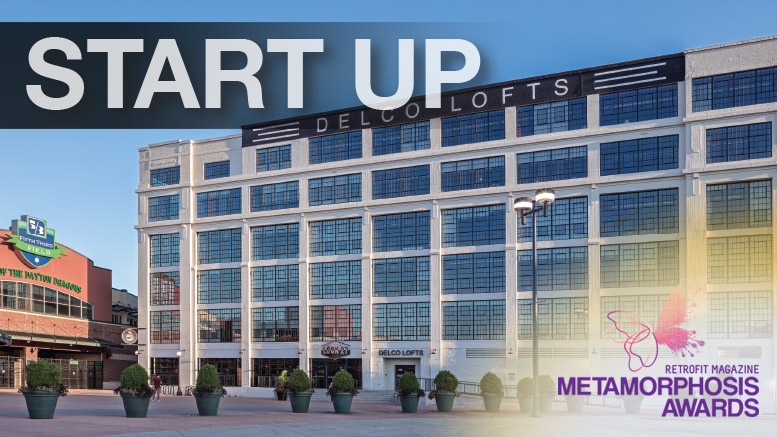 The Dayton Dragons play minor league baseball in Fifth Third Field, which can hold 7,230 baseball lovers, in downtown Dayton, Ohio. For 17 seasons, as fans cheered on their beloved Dragons, they likely didn’t notice—or didn’t care to notice—the abandoned 220,000-square- foot building adjacent to the field that had been “boarded up” with metal siding. Fans also probably didn’t realize Charles F. Kettering, the inventor of the electrical system in the various cars, trucks, vans and buses that delivered them to the ballpark, once paced the floor of the building, conjuring his next big automotive development. (To learn more about Kettering, see “Who Was Charles F. Kettering?”, bottom of page.)

Two firms that took notice of the 6-story, 1912 building, which was named after Kettering’s business, Dayton Engineering Laboratories Co., or Delco, were Troy, Ohio-based contractor Brackett Builders Inc. and Dublin, Ohio-based developer Crawford Hoying. Michael Hoying, vice president of Brackett Builders, and his brother, Bob Hoying, principal of Crawford Hoying, had been collaborating with other organizations on revitalizing Dayton’s downtown since 2014—first by constructing a 50,000-square-foot, Class-A office building and then multiple buildings that resulted in 269 residential apartments near the ballpark, an area known as the Water Street District.

“The ballpark is the epicenter,” Michael Hoying explains. “We started building the apartments right along the river, which is across the street from the ballpark and then quickly jumped into the Delco building for mixed-use space. Across from Delco, we built the first new hotel in downtown Dayton in decades. We’re still continuing today on another mixed-use project that’s finishing up in the ballpark’s center field, and we’re just starting to design some other new build and renovation projects across the street from the ballpark.”

The Hoyings’ firms began work on the Delco building in April 2016. By July 2017, Delco Lofts was unveiled to the public, featuring 133 market-rate studio, one- and two-bedroom apartments (many of which were already leased), as well as a microbrewery, Lock 27, which encompasses about 5,000 square feet on the first floor of the building and 4,500 square feet in the basement for brewing facilities.

Not only has the dramatic transformation of this property captured the hearts of Daytonians and Dragons fans alike, it’s also garnered Brackett Builders an inaugural Metamorphosis Award from retrofit in the Mixed Use category—and was the only winner in the category.

NATURAL LIGHT FOR THE WIN

The sturdiness of the concrete structure minimized major repairs to the Delco building’s bones. In fact, the building was one of the few in downtown Dayton that survived the great 1913 flood. The design team relegated the basement and first floor to parking for tenants. In addition to parking and Lock 27, the first floor contains a lobby and leasing space. The team focused on adding stairwells and walls to transform the second through sixth floors into Delco Lofts.

As is often the case when working in historic buildings, the team was limited in some ways by the existing structure. “We could have designed more one bedroom or two bedrooms into the project but we had limitations in the building,” Hoying recalls.

For example, the layout of the facility’s columns informed the design. “The columns really drove these apartments to be larger than we would normally see designed just because it doesn’t make sense to have a 3-foot-diameter column in the middle of a bedroom or a living room,” he remarks. “Instead, we placed demising walls and interior walls on these columns.” Ultimately, the apartments range in size from 638-square-foot studios to 1,648-square-foot two-bedroom units.

In addition, the sizes and sheer number of windows helped the design team determine the layout of apartments. In many places, the windows are as large as 18-feet wide by 10-feet tall, which reaches from floor to ceiling. “We obviously couldn’t have walls right in the middle of a window,” Hoying notes.

Because of the Delco building’s historic status, the development team opted to seek state and federal tax credits for the renovation. To qualify for tax credits while providing comfort to the building’s tenants, the team recreated the look of the original windows but with an energy-efficient product in the same sizes. Hoying recalls some back and forth with the manufacturer about mullions and corner and jamb details, as well as communication with the State Historic Preservation Office to ensure the new windows would be approved. However, Hoying would say this aspect of the project was more of a process than a challenge.

To also meet the preservation requirements, Kettering’s sixth-floor corner office was recreated. It boasts original wood floors that were repaired where necessary and refinished, as well as antique millwork and crown molding. The former office now acts as a 1,600-square-foot community space for tenants.

A NOD TO HISTORY

The original drawings of the Delco building were not highly detailed and the building contained multiple additions; therefore, during demo, the crew was surprised to find large wood beams and wood ceilings behind plaster ceilings on the sixth floor. “Our drawings directed us to install new drywall ceilings for that sixth floor. Then as we discovered the beams and realized they were in great shape and beautiful, we quickly involved the architect to make sure we didn’t have to install drywall ceilings to adhere to code,” Hoying recalls.

The local building department agreed with the architect’s opinion the original wood ceilings could be maintained, so the team cleaned them and made repairs where necessary. Hoying is pleased with the outcome. “There are some sixth-floor units that have living rooms with ceiling heights 15 to 18 feet, which is pretty rare downtown,” he says.

In a nod to the industrial use of the original facility, Delco Lofts features lighting with an industrial vibe throughout. For example, in the corridors, the designers took simple metal framing, typically used to support ductwork, and mounted LED strip lights to the framing. “It was a pretty simple concept, but it turned out great,” Hoying says. “It provides great energy-efficient lighting while looking modern and industrial.”

The design team also found ways to reuse materials from the original Delco facility in Delco Lofts. For example, the building had a 20-foot freight elevator, which the team removed. Because the freight elevator was so large, the team was able to place two new passenger elevators in the shaft while maintaining the original freight-elevator doors. The new elevators’ doors open near the original freight-elevator doors so tenants and visitors can view the old doors on every floor.

Hoying explains: “We bolted the old freight-elevator doors shut on every floor. Obviously, they don’t operate, but tenants and visitors are traveling through the original shaft in the new passenger elevators.”

Brackett Builders did not complete the tenant fit-out for Lock 27, but Hoying says his team provided the brewery owner with materials from the existing building that were reused in Lock 27. “A few wood doors from the facility were used as toilet partition doors, and used some elevator chains from the old freight elevator essentially as legs for the bathroom vanities,” Hoying says.

The Delco Lofts project wasn’t without challenges. For example, finding ways to ventilate bathroom exhausts and dryer vents was perplexing. “You can’t run out the exterior wall with anything because that wasn’t done when the building was originally built and we had to maintain the aesthetic integrity of these critical elevations,” Hoying explains. “We had to mechanically ventilate our dryer exhaust and all the bathroom exhaust. Creating the shafts for the 133 apartment bathrooms and dryers was a bit of a challenge. All these shafts had to go vertically straight through the building but had to miss critical floor and roof structural components—while maintaining the proper fire ratings at each floor penetration. Ultimately, all mechanical and electrical equipment had to be placed on the roof.”

Hoying says any restoration project is inherently difficult because “you just don’t know what you’re going to get into when you start ripping into the old and trying to reuse a building in a way it wasn’t originally designed and intended to be used.” But uncovering the surprises also can lead to the rewards.

“I think a lot of difficult projects like this one end up being the most rewarding ones once they’re successfully completed,” Hoying asserts. “The fact that Delco Lofts is fully occupied and it’s very visible in downtown Dayton, especially by the ballpark, so it gets viewed by thousands of people each game night, that is very rewarding to me.”

Who Was Charles F. Kettering?

Charles F. Kettering (1876-1958) was an engineer, businessman and inventor who held 186 patents. In his early career, he executed financial inventions, including a credit-approval process and, in 1906, the electric cash register. But he soon recognized the automobile as a potentially prosperous venture, and he and several financial-industry colleagues organized under Dayton Engineering Laboratories Inc., or Delco, in Dayton, Ohio. The team first set about improving upon the ignition. In 1911, when Kettering invented the electrical system that is still used in modern vehicles—starter, generator and lighting power—he sold 12,000 electrical systems to Cadillac immediately.

Only a few short years after inventing the electrical system, Kettering sold Delco, which eventually came under the General Motors umbrella and still is referenced in GM’s parts business as ACDelco. The Dayton Delco building was held by GM for some time before it was sold to a liquidation business that used it for storage. And then it was abandoned.

Meanwhile, Kettering helped found Flxible Co. in 1914. The company manufactured motorcycle sidecars, funeral cars, ambulances, intercity coaches and transit buses, eventually becoming the largest North American transit-bus manufacturer. Kettering was president of the company until 1940 when he became chairman of the board, a position he held until his death.

Be the first to comment on "An Abandoned Building Once Produced Great Inventions; Now as a Mixed-use Facility, It Has Catalyzed a Downtown’s Restoration"