Fishermen come to the water with a sense of anticipation, some well-honed patience and an appetite for chance. These same qualities well served representatives from the city of Memphis, Tenn., and founder of Bass Pro Shops John Morris when they set out to create an experience like no other inside the Memphis Pyramid. 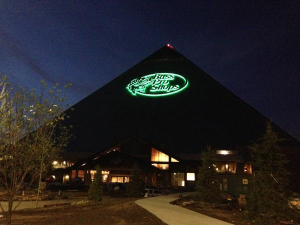 Originally erected in 1990 as a 20,000-seat sports arena, the 321-foot-tall stainless-steel-clad pyramid today is A Bass Pro Shops flagship store.

Originally erected in 1990 as a 20,000-seat sports arena, the 321-foot-tall stainless-steel-clad pyramid presides over the Mississippi River shore and downtown Memphis. “It was constructed to attract an NBA team,” says Wain Gaskins, associate at Memphis-based Kimley-Horn and former city engineer for the city of Memphis. “The Grizzlies agreed to relocate to Memphis in 2001 but they wanted a more modern sports facility. By 2004, the Grizzlies had moved into the new FedEx Forum and the pyramid was empty.”

Adaptive reuse of a triangular building with 26.5 million cubic feet of enclosed volume posed a conundrum. For two years, the city aggressively sought renovation opportunities. “People came to us with a lot of ideas but no one had any money,” says former Memphis City Councilman Tom Marshall, now principal of O. T. Marshall Architects, Memphis. “The city was very fortunate to eventually catch Morris’s eye. He’s an incredible visionary and saw the potential to turn the pyramid into a Bass Pro Shops flagship store.”

In 2010, a few years after Marshall retired from the Memphis City Council, Morris made a commitment to lease the 32-story space, and the city assigned O. T. Marshall Architects to design the pyramid’s renovation. Marshall brought Gaskins and Kimley-Horn onto the project to conduct civil engineering design.

The destination retail experience of Bass Pro Shops at the Pyramid mixes theme-park elements with recreational amenities and shopping. The one-of-a kind hybrid contains 525,000 square feet of retail and hotel space. There’s a swamp on the base level where 100-foot-tall, high-density-foam cypress trees tower into the pyramid above water marked by bridges, wharfs and working boats. The Ducks Unlimited Waterfowling Heritage Center includes a live duck aviary. On the second and third floors, a 103-room hotel furnished in rustic décor circumscribes the retail shops. Although there are no guestroom windows to the outside, balconies set in the vast interior perch over the swamp and peer into the trees.

Sports enthusiasts may perfect their aim in the building’s live-fire pistol or archery ranges while those who prefer leisure activities can head into the Fishbowl—a 13-lane bowling alley adjacent to one of the building’s two huge aquarium tanks so it appears to be underwater. Outside the bowling alley, a 3-story waterfall cascades down into the 50,000-gallon aquarium. “You achieve an ‘aha’ moment at every turn and twist in the building,” Marshall says. “There’s so much to see and do—it’s all about the thrill here.”

The space also contains two restaurants and a glass-floor observation deck at the pyramid’s 25th-floor pinnacle. Nearly 600,000 gallons of water fills the swamp and aquariums, creating a home for 1,800 fish of 36 varieties.

Making the building tenant-ready for the massive undertaking required a $57 million investment on the city’s part. To fund it, the city sold bonds that it will repay through the state’s Tourist Development Zone. “The state allocates a 9.25-cent sales tax for every dollar spent in specific public-use facilities,” Marshall says. “The Bass Pro Shops at the Pyramid qualified, so the state will rebate approximately 7 cents of the sales tax back to the city.” 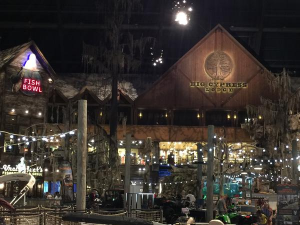 “It was so interesting to go from solving truly technical equations in relation to flooding concerns and seismic reinforcement in one moment to this very artistic endeavor in the next. Art and science married together at each step of the project.” —Tom Marshall, principal, O. T. Marshall Architects

Built before discoveries about potential activity in the New Madrid Seismic Zone and its fault line just 90 miles away altered building codes, the original structure did not have lateral-force resistance. The 450-foot-wide pyramid sits at a bend in the Mississippi River, and geological samples revealed a difference in soil stabilization between the building’s western river side and the sturdier clay at the eastern portion of the site. The team realized seismically reinforcing the building by tying it down with pilings might lead to a 144-inch lateral soils displacement. If the western edge sloughed off into the river while the eastern side remained stable, it could result in a potential collapse.

“We had to come up with a sophisticated plan for seismic resistance,” Marshall recalls. “We needed to make the steel building pliable, so it could achieve global displacement. Basically, the entire building needs to move in unison and remain within its elastic range if the ground starts shaking.”

The solution required below-grade and above-ground reinforcement. First, the team built a subterranean barrier wall between the pyramid’s western façade and the river. Approximately 500-feet long and 90-feet deep, the wall was constructed of reinforced zip sheet piles interlaced together.

The pyramid’s structure was made from four box frames that leaned in toward the center without any depth of support. The team added six pilings at the base of each box frame to prevent the frames from failing during a seismic event. To add ductility to the primary and secondary members (in a pyramid, the roof and walls are one and the same), the team added steel gusset plates to the thousands of welded connections to provide movement and elasticity.

LSI Industries Inc. Receives Gold Partner of the Year for Its Digital Signage

Airports of the Future Accommodate Growing Masses of People With Safety, Comfort and Services in Mind