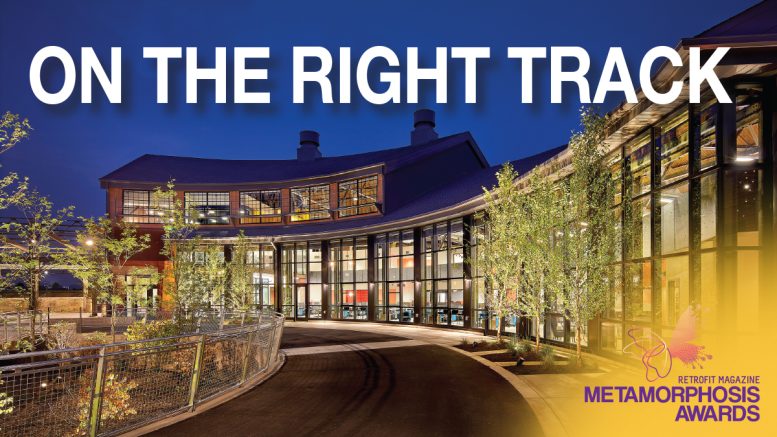 Touring Pittsburgh’s Roundhouse five years ago, it would have been a stretch to visualize the decrepit building as a hub of technology and innovation. The 25,000-square-foot Roundhouse and its outdoor turntable were built by the Monongahela Connecting Railroad around 1887 to service train engines and redirect cargo, and it basically remained without any upgrades since 1997. The building had deep pits in its concrete floor, weeds growing inside, standing water on the slab and the underside of the timber roof decking was blackened by soot. Still, the deteriorating Roundhouse captured the imagination of many, including GBBN Principal Anne Chen, AIA, LEED AP.

“You can envision the trains, and there’s a beauty in the functionality of moving the trains that informed the building’s curved geometry. It’s actually awe-inspiring,” Chen says. “But it was a big investment to preserve and adapt the Roundhouse to make it usable. When the Almono partner foundations agreed to do it, I was thrilled.”

Partially built into a hillside, the 10-bay Roundhouse stands on a 178-acre riverfront redevelopment of an urban brownfield formerly owned by Jones & Laughlin Steel Co. and then by LTV Steel Co. In 2002, four Pittsburgh foundations formed the Almono Limited Partnership, or Almono LP, and purchased the site. Called Hazelwood Green, the total development’s plan calls for workplace, housing, retail and public spaces integrated into the surrounding community.

Almono LP retained GBBN in 2017 to prevent the Roundhouse’s further decay and ultimately design its adaptive reuse. As one of only three historic structures left on the site, the Roundhouse is a showpiece of Pittsburgh’s industrial past.

“It’s a unique building so clearly representative of its railroad and steel heritage,” Chen notes. “Hazelwood Green will be home to many new buildings in the future. The Roundhouse will continue to communicate the site’s history, which will enhance the redevelopment overall.

In February 2019, OneValley decided to make the Roundhouse one of its innovation centers. GBBN worked with the Silicon Valley, Calif.-based company to design an appealing contemporary space that attracts entrepreneurs to collaborative co-working spaces inside and outside the building. At the same time, the project incorporates original features, such as the turntable and operator cab, track rails, crane and attached shed structure.

“Retaining these important elements is a major part of understanding the building’s industrial nature,” Chen says. “These projects are so few and far between because they’re really difficult to renovate, and it takes a group like Almono to be committed to keeping them.”

The Roundhouse was constructed as a cavernous double-height space with a small mezzanine. To accommodate OneValley’s program and give the large volume a more human scale, GBBN added a partial second floor. The team replaced the bays’ garage doors with a curtainwall to bring in daylight and offer views to the outside public area and the Monongahela River beyond.

Historic wood, brick and steel play prominently in the project, but it was a concerted effort to properly preserve them while making the building as thermally sound and energy efficient as possible.

During selective demolition, the contractor discovered the structure was in worse shape than previously thought. Steel columns suffered from extensive corrosion and the column bases had to be encased in concrete for stabilization. Some columns required additional support, and the team spliced in new steel elements. Many of the steel trusses also needed steel reinforcement.

The underside of the wood roof decking was cleaned, and the team replaced the structure’s dilapidated exterior roof. At the roof gables, historic metal vents once exhausted heat from the industrial space. A large amount of insulation was added above the decking for energy efficiency, which required the contractor to remove the roof vents, rebuild them and replace them after construction.

The desire to preserve the interior crane also demanded its removal during construction. Reinstalling it became a delicate procedure; the contractor had to thread the crane through the roof-vent openings to bring it inside.

GBBN created a new slab and the partial second floor out of concrete because it allowed for a thinner structure to facilitate occupant head room. Semi-circular, the second floor remains sympathetic to the curve of the original architecture.

“Using concrete was a really effective design strategy,” Chen asserts. “The second floor seems to float within the space and it’s spare, allowing occupants to easily see the steel trusses. The contrast of the contemporary concrete against the original steel creates a fluid separation between the new and the old.”

One aspect of the interior renovation, however, combines current technologies with traditional material: the customized guardrail panels on the partial second floor. Made of carbon steel, the guardrail’s perforated panels were digitally designed. Then, the computer files were provided to the metal fabricator who programmed the pattern into laser-cutting equipment.

Chen notes modern computerization was precisely what made the guardrail feasible. “Creating a piece like that from hand would have been too expensive to be considered for the project,” she says. “I love the mix of using the digital process with the steel—a material so ingrained in Pittsburgh’s history.”

Hazelwood Green will be reviewed under Pittsburgh’s p4 Performance Measures, a tool to evaluate real-estate development projects. The “p4” refers to people, planet, place and performance. The Roundhouse is the first project in Hazelwood Green tracked to these standards.

Almono LP included Monmade, a non-profit organization that curates, coordinates, and purchases artisan design and products from regional manufacturers, in the project. These locally designed and manufactured elements, which include a custom reception desk and wood kitchen island, ceramic pendant lighting fixtures, wood signage for room identification, and kitchen and bathroom tile, infuse the Roundhouse with character. Bike racks, outdoor signage and moveable, mounted benches on the turntable also were sourced through Monmade.

“The beautiful pieces add a uniqueness to the project,” Chen notes. “And supporting the regional artisan economy so they can thrive is sustainable on so many levels.”

The turntable is now the centerpiece of a relaxing public space connecting to the surrounding Hazelwood neighborhood through bike trails and bus routes.

“The Roundhouse shows the evolution from steel to an innovation-based workforce and serves as a successful demonstration model for historic projects like these,” Chen says. “It’s a really wonderful investment in the future—not just the for the next generation but for generations to come.”

An Industrial Facility Now Exhibits, Retails and Educates about the Craft Arts