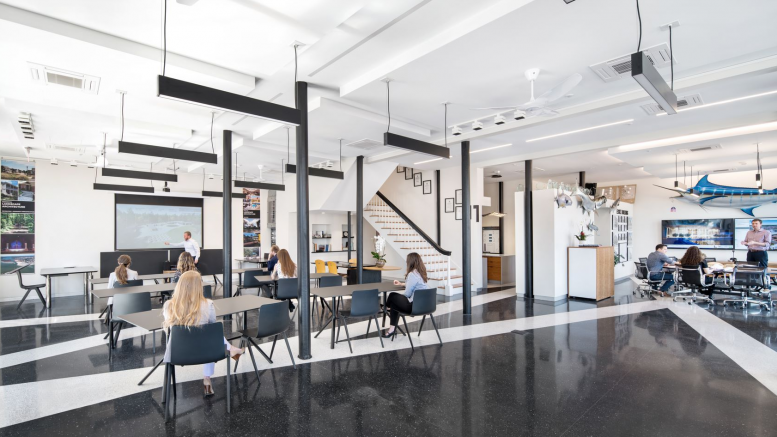 As architect Carl Elefante so eloquently put it, “the greenest building is one that’s already built.” The Essex, built in 1905, prominently stands in the heart of downtown Norfolk, Va. Its stately façade proudly faces the TIDE light rail station on the MacArthur lawn and is at the core of the city’s Historic District. By choosing to restore the Essex, the team at VIA design architects took the immense step of saving a contributing structure that had been sitting vacant for more than 10 years and was in danger of demolition. Although the changes to the building over time were photographically well documented, it was clear to the team the best guiding “period of historic significance” for this transformation was the year it was built—when the building’s form, proportions and overall appearance were at its best.

Throughout the building’s life, the exterior and interior had evolved. Over time exterior masonry had been removed, windows were covered up, awnings were added, and much of the exterior had been whittled away. VIA design architects had made every stride identifiable to re-establish and restore the masonry façade that adorns E Plume and Bank Street to its original design by removing the awnings, adding masonry piers and reinstating operable transoms into the street level storefront bay pattern.

During the last century, the first floor of the building had been significantly modified with each new owner and occupant. Previous owners boarded up exterior windows, cut and patched exterior walls, and reconfigured interior walls to the point where none of the first floor building components were considered historically significant. This allowed us the ability to remove all obstructions and open up the floor plan to create a new, larger space. Prior to the renovation, when you entered the building there was a “foyer” area and an old elevator.

The installation of this elevator in the 1940s caused the removal of the original wooden grand stair. This non-historic elevator was removed and the wooden grand stair was rebuilt to open up all three floors, allowing daylight to penetrate the previously dark hallways. A new, larger elevator was positioned in the back of the building for accessibility and a period-compliant terrazzo floor was installed throughout the entire first floor space. Opening up the first floor, creating a large forum space with direct access to a full-service kitchen enables our firm to provide the VIA team, the community, and local entrepreneurs with a place to coordinate meetings, seminars, staff retreats, parties, book signings and more.

The second and third floors were consistently used as support offices throughout the building’s history. VIA design architects considered the preservation and reuse of the original design elements, such as the windows, doors, transoms and wood moldings. During excavation, existing vinyl tiles were removed from the floor to find beautiful heart pine wood flooring and original terrazzo. Uncovering these magnificent elements was truly exciting and the team decided to restore both the wood floor and terrazzo to their original character. The team removed the dark sheet paneling from the walls and implemented a new, light-colored paint throughout. When inspecting the baseboards, team members discovered marble that had been painted over. These marble baseboards were carefully cleaned and restored to “like-new” condition.

The original windows had to be taken offsite for repainting and their counterweights were repaired, allowing them to open as they were intended by design. The office doors were fully restored to their original capacity, and multiple layers of dropped ceiling was torn away to reveal the original height intention of the hallways. The transoms above the corridor doors were rebuilt, restoring the natural, passive convection airflow. The transoms were an important feature for the early occupants because they did not have air conditioning and needed to utilize the transom technology for temperate seasons. Today, the building occupants can celebrate the popular and energy saving desire for fresh air movement through the interior spaces.

During the second and third floor restoration, only two partitions were removed to create a workspace large enough to fulfill VIA design architects’ needs and a flexible space for potential growth. In honor of the original office design, the architects placed perpendicular wood panels in the floor to reflect the original partitions that were removed.

The breezeway behind the building housed a dangerous, broken down fire escape leading down to an exit onto Bank Street. Keeping to the original exit pattern, a new fire escape was constructed that now extends past the third floor up to the rooftop. We repaired the roof and incorporated a large skylight over the interior stairwell illuminating and increasing natural light throughout the building. On the rooftop, VIA design architects designed a beautiful mahogany deck with planters offering our team and visitors a lush green urban oasis for daily use and pleasure. The views are spectacular and enable guests to see downtown Norfolk from a different and unique perspective.

All design decisions “toe-the-line” between building efficiency and the guidance of the Virginia Department of Historic Resources, as well as the Department of the Interior National Park Service Historic Tax Credit Program with all eyes on the future. As architects and designers, the team at VIA design architects approached this project as a unique opportunity to “practice what we preach” on multiple levels and really create a piece of demonstrational architecture by making an old place new again. This 110-year-old monument has been future-proofed and will continue to contribute to the city of Norfolk for many years to come. Soon our data collection capabilities will begin to provide the proof and real numbers to support the dialogue of sustainable design and rehabilitation to prove our investment is solid.

The real innovation is that we have truly made every effort to drive inventive change in the way that building owners design and occupy buildings—by doing it ourselves in a way that is efficient, impactful, is respectful to historic structures and also beautiful. The Essex and its vast transformation is VIA design architects way of showing the community “best practices” to invest, design, restore, preserve and create smarter buildings for the future.

What’s Hot in Architectural Woodwork in 2020