In the shadow of two outdated smokestacks and four antiquated coal-fired boilers, Ball State University, Muncie, Ind., has started the second and final phase of converting its district heating and cooling to a geothermal ground-source heat pump system, the largest project of its kind in the U.S.

The conversion, which began in 2009 to replace the coal boilers, now provides heating to half the campus and cooling to all of campus. When the system is complete, the shift from fossil fuels to a renewable-energy source will reduce the university’s carbon footprint by nearly half while saving $2 million per year in operating costs.

Under the direction of Jim Lowe, the university’s director of engineering, construction and operations, work was completed earlier this year on Phase One, which includes two geothermal fields, construction of the North District Energy Station and the connection of buildings on the northern part of campus to the new distribution system.

Work has begun on Phase Two, which includes installation of 780 of the remaining 1,800 boreholes in a field on the south area of campus.

Construction will continue throughout 2013-14 and will include a new District Energy Station South, containing two 2,500-ton heat-pump chillers and a hot-water loop around the south portion of campus. The system will then connect to all buildings on campus, eventually providing heating and cooling to about 6 million square feet.

retrofit’s staff recently had the opportunity to talk with Lowe about the campus conversion to geothermal and how Ball State is setting an energy example for other universities and even cities around the world. 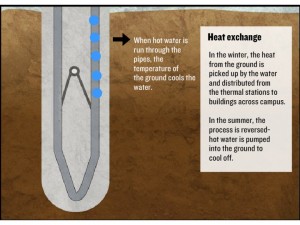 Geothermal uses the relatively steady temperature of the Earth to heat and cool buildings.

retrofit: Can you explain what Ball state’s boiler plant consisted of before the conversion?

LOWE: We had seven boilers that make steam. We convert steam to hot water through a heat exchanger to heat our buildings. Three of the boilers use natural gas as the fuel; four use coal. When we started this project years ago, the goal was to phase out the four coal-fired boilers. At that time, we were looking at the possibility of one solid-fuel-burning boiler to take the place of the four antiquated boilers, understanding that the existing boilers were reaching 70 years in age.

r: Where did the idea for geothermal come from?

LOWE: Our boilers were old, so they’re capacity was reduced, we couldn’t get parts and we have EPA regulations to follow. We knew it was time for a replacement. We looked at options and felt like the prudent approach was to install a boiler that would eventually allow us to go to 100 percent renewables. We were going to start out with a pretty healthy percentage of coal and 30 percent renewables though we hadn’t totally identified what the renewables would be. At that point, we discovered the costs were escalating beyond our appropriation; we couldn’t afford our equipment with what needed to be done to replace it. We evaluated going totally to natural gas and our first option, which was the solid-fuel-burning boiler that would someday burn 100 percent renewables.

When we started throwing out renewable ways to heat the buildings the discussion led to geothermal. Geothermal would allow us to replace the four coal-fired boilers and it also would allow us to reuse valuable thermal energy that we previously were throwing away, namely heat from the chilled water side that could be used to make hot water.

Be the first to comment on "An Energy Example"