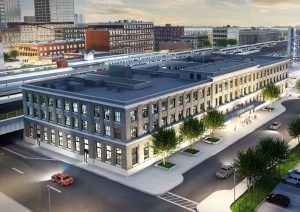 The Springfield, Mass., Union Station site was a constant reminder of the struggles American cities have been facing and is inextricably linked to the demise of rail.

The Springfield, Mass., Union Station site, with its abandoned buildings, was a constant reminder of the struggles American cities have been facing and is inextricably linked to the demise of rail—when the trucking industry increased its connectivity and America fell in love with the passenger car. Elected officials, local citizens and the Springfield Redevelopment Authority (our client), envisioned a different future. With that in mind, they charted a path forward to usher in not only a renaissance of Union Station, but also a catalyst for change in the city of Springfield and the surrounding region. The vision entailed a major investment in the infrastructure. Starting with a new high-speed rail between Hartford, Conn.; New Haven, Conn.; and Springfield, the project was rounded out by a plan to repurpose the Union Station Terminal and transform an underutilized site into a new multi-modal hub, incorporating intercity and intracity bus terminals.

It was the unwavering commitment of Rep. Richard Neal, D-Mass., that propelled this vision. For nearly 40 years, his priority has been to renovate and reconnect Union Station, beginning when he announced his first candidacy for City Council at Union Station and continuing during his terms as mayor and then congressman.

Opportunities of this significance are rare and the design team felt an added obligation to meet the expectations of the citizens, city and region. With HDR’s recognized, interdisciplinary design approach to problem solving, the Boston office was selected to lead this transformation. The collaboration consisted of a team of specialists, including Chadds Ford, Pa.-based John Milner Architects, the historic-preservation consultant. Our shared goal was to restore the station’s historic integrity while modernizing its structure to provide a facility that would be safe, more accessible and environmentally friendly with amenity-rich options.

Our design team embraced the myriad of challenges and saw them not as deterrents, but rather opportunities. As a designer for the repurposing of Boston’s Custom Tower, I am no stranger to historic-preservation challenges. I knew the equation for success must begin with a clear understanding of the context and program—to ensure we identified the right interventions. In this case, it was critical to understand the context of the building and the history of the city.

A City Defined by Innovation

Springfield is culturally rich with a legacy of big ideas and countless innovations. Like many early American settlements, strategic location was crucial. Springfield took advantage of trade routes to Albany, N.Y.; Boston; Montreal; and New York City, and was conveniently located at the convergence of four rivers. The city quickly emerged as a place of opportunity and the birthplace of remarkable inventions, including the first American musket and later the famous Springfield rifle, Merriam Webster’s first American-English dictionary, the first use of interchangeable parts and the assembly line in manufacturing, the first American horseless car, the discovery and patent of vulcanized rubber (Charles Goodyear), the first American gasoline-powered car (Duryea Brothers) and the first successful motorcycle company (Indian). Springfield also is known for its Basketball Hall of Fame Museum and the literary creativity of Dr. Seuss. In addition, Springfield was home to Wason Car Works, once the largest makers of rail cars in the U.S. This company constructed an estimated 30,000 rail cars of every description, including the Pullman Sleeping Car, a renowned benchmark of comfort and style. Wason Car Works was just a few blocks away from Union Station and was linked to it by a number of rail lines.

Union Station was the central hub for transportation in western New England from the 1920s to the 1940s with 11 tracks used to handle the volume of travelers. In its early days, the station was a bustling terminal, able to handle the arrivals and departures of more than 90 trains per day. Designed and built in 1926 to handle the demands of early 20th-century train travel, the Terminal featured seating for 650 people, restaurants, several newsstands, a barber shop and travelers’ aid station. It also included a parlor with a classic serpentine counter design, a place where you could imagine families with young children ordering hamburgers and ice-cream floats. With the decline in train use after WWII, the once active station gradually eliminated services, activities and amenities.

The adjacent Baggage Building also was a very active complex during the ’20s to ’40s with more than 30 trains a day delivering mail and freight of all kinds, including livestock. Like the Terminal, the Baggage Building was a victim of the decline of rail service, which led to the eventual closing of freight operations in 1967.

The goal was to restore the station’s historic integrity while modernizing its structure to provide a facility that would be safe, more accessible and environmentally friendly.

Located in a blighted section of downtown Springfield, the once majestic train station had been dormant and forgotten for more than 40 years. Elected officials and the Springfield Redevelopment Authority saw its potential to serve as the catalyst for urban renewal in the area. HDR was tasked to create a 21st century transit-oriented facility (multi-modal hub) to maximize the intermodal transportation attributes of the station; adaptively reuse and revitalize a historic structure; and design improvements that would be feasible and sustainable, spurring long-term development. The goal centered on converting the station into an intermodal center, serving the city and the entire region. The center was to provide connections to enable continuation and expansion of transit services (local, regional and intercity buses; Amtrak, commuter and high-speed passenger rail) and other ground-transportation services, at a single location, with convenient pedestrian access and sufficient parking.

The reincarnation of Union Station as a multi-modal transportation hub and its tangible synergies with the urban fabric of Springfield qualifies it as a Transit Oriented Development (TOD), which will allow other developments to follow and become “good citizens.” A TOD can be defined as any mixed-use development that offers housing, office, retail and amenities that are integrated in a walkable neighborhood, located within a half-mile of quality public transportation. Based on the location, further success will be measured by its inclusion of diversity while allowing convenient, affordable and active lifestyles for all generations.