The Broadway East neighborhood in East Baltimore is one of the toughest in a tough city. The area has unemployment rates upward of 50 percent and poverty rates quadruple the national average. Nearly half of the buildings here are vacant or have been demolished. Amid this blight stands a massive, 32,000-square-foot building that had been vacant since 1973, a symbol of the area’s decay. This year, however, the American Brewery reopened after a nearly $25 million renovation project, and its new owners plan to transform the building’s symbolism into one of hope and revitalization. 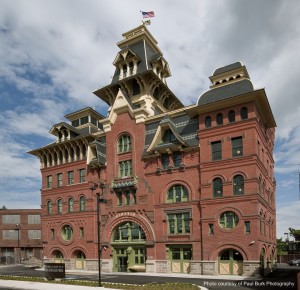 The imposing, Italianate-style American Brewery building has towered above the East Baltimore landscape for more than 100 years. At 5 stories and perched atop a small rise, the structure is a local landmark and was once the heartbeat of a thriving industrial neighborhood. For much of the last three decades, however, it was a symbol of urban blight.

The Brewhouse building was originally built in 1887 by German brewer John Frederick Wiessner, then sold to the American Malt Company in 1931 during Prohibition. Perched atop a small hill, the 5-story building dominates the local landscape. Built in the distinctive Italianate architecture style, the structure is characterized by ornamental gables, intricate brickwork, projecting eaves, elaborate cornice structures and three irregular pagoda-like towers on the roof. So unique was the building that it was named to the National Register of Historic Places the same year it closed in 1973. After more than 80 years of industriousness, the building went dormant. The building and an adjacent bottling plant were donated to the City of Baltimore in 1977, and the next three decades saw it fall into disrepair along with much of the surrounding neighborhood. Holes the size of mattresses appeared in the roof, leading to massive water damage throughout the building’s decaying interior.

Several redevelopment schemes were proposed and failed, but in 2005, development rights were awarded to owner and developer Humanin, Inc., based in Columbia, Md. Humanin is a 35-year old nonprofit social and human services provider with 650 employees and has served East Baltimore for 20 years. This year some 250 employees moved into the nonprofit’s new Baltimore headquarters in the American Brewery once the first phase of the renovation — the Brewhouse building — was completed in April 2009. Humanim plans to hire another 60 from the surrounding community. The rehabilitated Brewhouse enables Humanim to consolidate its operations and expand its existing employment and clinical service programs, including services for individuals with developmental, emotional, neurological and physical disabilities.

“It not only saves a vacant property that had once been the pride of East Baltimore and puts it back into circulation, but the very individuals [Humanin’s] mission is to serve are located in large numbers in the immediate vicinity of the project.” – Erica Stewart, outreach coordinator for the National Trust for Historic Preservation’s Community Revitalization Program

The second phase will involve the next-door Bottle Building, a 60,000-square-foot, 1937 industrial building. It will be converted into a center for organizations working in community arts, community services and small business development.

The preservation and community development impact of this project made the National Trust for Historic Preservation a funding ally — the National Trust Loan Fund (NTLF) supported the project in its early phase. NTLF and Bank of America each contributed a $375,000 predevelopment loan which stabilized the building until constructing financing was in place. The National Trust Community Investment Corporation (NTCIC), the for-profit subsidiary of the Trust that invests equity in certified rehabilitation projects, also stepped in with a $5.43 million historic and New Markets Tax Credit equity investment.

“NTCIC, in addition to needing to make sound investments, cares deeply for projects that have a strong community development impact, and there’s just no question that the American Brewery project meets that criteria and then some,” says Erica Stewart, an outreach coordinator with the Trust’s Community Revitalization Program. “It not only saves a vacant property that had once been the pride of East Baltimore and puts it back into circulation, but the very individuals [Humanin’s] mission is to serve are located in large numbers in the immediate vicinity of the project.”

All together, Humanim raised nearly $20 million, with another $4.5 million from private donors. The fundraising was critical considering the scope of the necessary repairs. Because the building had fallen into such an advanced state of disrepair, the cost of shoring up its infrastructure, preserving its historical elements and redesigning its interior and exterior proved formidable. To wit, pigeon guano had accumulated unabated inside the building in a layer several inches deep.