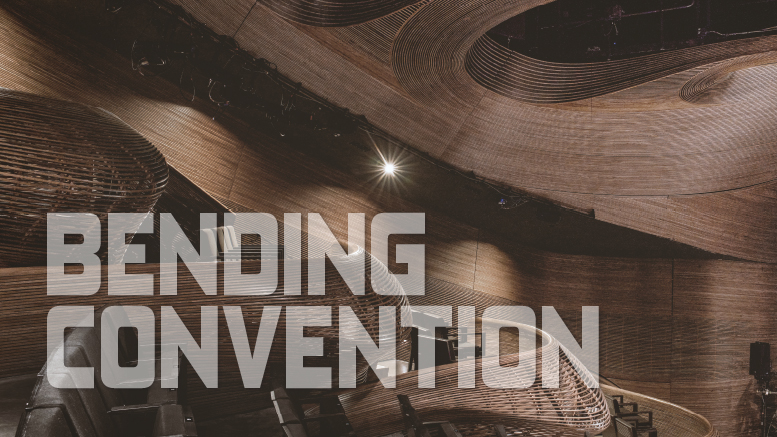 Invention, risk and experimentation are characteristics of the performing arts, and performing- arts spaces are places of truth-seeking and truth-telling, according to Robbie Eleazer, AIA, design director at Trahan Architects. “You can challenge authority and convention in a way you can’t do elsewhere,” he asserts. “At the same time, they are places of optimism.”

During the renovation of the Coca-Cola Stage at the Alliance Theatre in Atlanta, Trahan Architects aspired to creatively address decades-old disparities yet maintain the theater’s functional and state-of-the-art technical aspects. Perseverance paid off and—mirroring the arts—invention, risk and experimentation played prominently in the project’s realization.

Years ago, African Americans were forced to sit in the balconies of performance spaces and access their seats through separate entrances. A member of the Alliance Theatre’s board of directors described her grandmother’s recollection of the relegating experience. For many in the South, the concept of the balcony is still intertwined with segregation. Although the renovation project began in 2015 before more recent racial-equality activism surged nationwide, designers were moved by the account. Viewing the balcony’s isolation through the board member’s family lens had an early impact on the design.

“We had an intuitive epiphany on the project that the architect has a responsibility to create environments that foster equity,” Eleazer recalls. “Early in the design process, we attempted to do away with the balcony entirely. We tried 50 different options. But we weren’t able to solve the room for acoustics and seating capacity.”

Another design inspiration came in the form of a wooden bowl by the multigenerational, Atlanta-based artisans at Moulthrope Studios. Because a circle has no start or end, designers recognized translating the rectangular space into a circular geometry would allow people to mix together.

“Being inside a box is different than being inside a bowl,” Eleazer says. “A bowl is more democratic, and the Moulthrope hand-turned bowl emanated warmth, power and significance. We started experimenting with how to make the balcony and orchestra circular and fuse their lines together.”

Now, patrons can enter any door to the theater and access every seat. Two staircases for perimeter box seating step down within the room into the orchestra, and the cross aisle in the middle of the orchestra graciously blends into the staircases. While it’s rare to add staircases into a theater renovation because it reduces seating capacity, the theater’s board saw the benefit.

The notion of equality also included creating ample access for people with disabilities. Early concept pre-designs showed elevators, but designers added an interior ramp instead to eliminate the experience of separation. The ramp now cascades along the room’s edge, giving audience members a shared journey to all seating levels. The lower orchestra, orchestra and balcony levels all have prime seats reserved to accommodate patrons with disabilities.

Patrons feel a clear sense of inclusion because the balcony seems to wrap around the audience. The design also moved the audience 10 feet closer to the stage, and performers feel more like they’re part of the space.

Trahan Architects had designed the room’s layout with cascading staircases and ramp, but the team remained unsure of the best material choice for the project. Although a wooden bowl influenced the design’s geometry, sculpting heavy pieces of wood to achieve the complex shapes would produce a lot of waste. Initially, team members had a shape made from cast stone and then another of cast plaster. They built formwork and searched for more malleable, fluid materials.

“We were exploring but nothing seemed right,” Eleazer recalls. “At Trahan Architects, we seek to find a role for handcraft in an industry that often relies on manufactured processes and materials. One night, Trey [the firm’s founder Victor F. “Trey” Trahan, FAIA] sent me an email of Matthias Pliessnig’s work. He connected the dots between Matthias’ artistic techniques with wood and a way to make the geometry work.”

Pliessnig is a New York-based design artist who creates unique lattice furniture and art forms from steam-bent wood strips. If the concept could transfer to the theater’s new design, it would be pliable and resource-efficient; the strips are built on loose networks of bent jigs without the need for molds.

‘Guides for Equitable Practice’ Provides a Resource for Equity, Diversity and Inclusion Issues