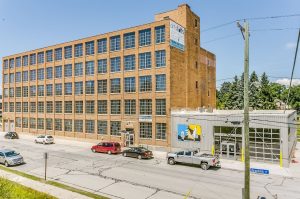 Arguably the biggest attraction in terms of the building’s suitability for converting to residences, the large windows delivering a bounty of natural light, was also one of the primary challenges.

For much of the 20th century, Manitowoc, Wis., was what one might call a company town, home to the Mirro Aluminum Co., once the world’s largest manufacturer of aluminum cooking utensils with eight plants in three states. Two of those plants were in Manitowoc. But by 2003, the company had ceased operation, and in 2017 Manitowoc saw its larger facility demolished.

Thankfully there is a happier ending for Mirro Plant #3, dating to 1929, which for decades produced the company’s popular MirroCraft line of lightweight pleasure boats. Production ceased in the early 1960s, and for many years the facility was occupied by artist studios. Yet the plant was continuing to deteriorate physically.

Now, however, the building has been fully restored as the Artist Lofts, a 40-unit affordable housing project serving tenants at 30 to 60 percent of the median income (with four units reserved as market rate). Although the restoration by Milwaukee’s Quorum Architects had to be historically sensitive to meet the demands of a National Register of Historic Places-listed structure (it was added in 2016), the project also met ambitious energy-efficiency goals, achieving the highest-ever score from Wisconsin’s Greenbuilt Homes program. “We were pretty proud of doing that with a historic building,” says Kristine Giornalista, vice president of Rice Lake, Wis.-based Impact Seven, which is the owner and co-developer of the Artist Lofts.

Prior to renovation, the building seemed run down but had great potential, recalls Todd Hutchison of Milwaukee, Wis.-based Wisconsin Redevelopment, one of the project’s developers. “The windows were broken out in a number of areas. It didn’t look very pretty,” he says. “But it just seemed like a solid building from the inside.” Indeed, Hutchison recalls a moment when the owner took him in the freight elevator and stopped it between floors “so your eye was level with the floor,” Hutchison recalls. “He’d say, ‘Look: it’s as straight as can be.’ And it was. You could put a marble on the floor and it wouldn’t go rolling away.” Given the ceiling heights and the building’s openness, Hutchison knew the conversion to residential lofts wouldn’t require a lot of demolition. And while some of the windows seemed to need patching up, “They were so large, so inviting, and let so much natural light into the space,” he adds. “That was really attractive.”

Arguably the biggest attraction in terms of the building’s suitability for converting to residences—the large windows delivering a bounty of natural light—was also one of the primary challenges. “It was a careful tightrope between not disturbing the historic character and trying to create an energyefficient building,” Giornalista says. The team had to make the case to the State Historic Preservation Officer that the windows were in bad enough shape to need replacing. “Usually the windows are something that if at all possible historical societies want you to keep,” she explains. 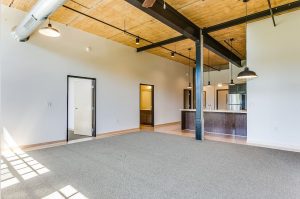 The team carefully surveyed all the windows to show they were in most cases not in sufficient condition to last another 30 years. As part of a compromise, however, the original windows were maintained on the first floor, which is largely used for automobile parking. The next challenge was “to develop replacement windows that matched the historic sight lines and openings,” explains Chris Hau, a principal with Quorum Architects. Yet the new windows had to be right. Historic steel-sash warehouse windows require a very specialized replacement window because of the very narrow sightlines of the frame and sashes. “What’s unique is there were some existing steel Ts running vertically that allowed the warehouse windows to fit into that opening, Hau explains, “so we were able to use some of that existing steel structure to put our new replacement windows in. It’s a blend of new and old.”

Hau also believes there has been a noticeable uptick in new window products for historic-building applications. “In the last 10 years, many manufacturers have been able to generate thermally broken assemblies in smaller footprints,” he says. “The window manufacturers are doing more projects so they have developed more product lines that meet the needs of historic-preservation projects.”

Inside, to convert an old industrial plant into contemporary apartments, the architects created a double-loaded corridor down the middle with units on each side, with those big windows filling each space with a bounty of natural light. But first they needed to address acoustics. The building had a unique feature: wood floors made of 2- by 6-inch planks end nailed together, topped by regular hardwood flooring. Although sturdy, “it did not provide good sound masking,” Hutchison recalls. “The sound reverberated through the whole floor and you could hear other people’s conversations.” Builders removed the old hardwood floor, added 2 inches of sound matting and re-laid new hardwood flooring.