Despite shunning the term “minimalism” throughout his lifelong career, Artist Donald Judd is nonetheless considered one of the theory’s great scholars. Judd (1928-94) believed how and where his sculptures were displayed was as important as the clarity and purity of his geometric forms. To develop and refine his belief in permanent placement of art, in 1968, he purchased a 5-story structure with a cast-iron façade at 101 Spring Street in New York’s SoHo neighborhood for use as his residence and studio.

Originally constructed in 1870 as a textile manufacturing facility, the structure was perfect for Judd’s studio because of its open spaces and large windows. Judd’s 13,000-square-foot building allowed him to permanently place his works while advancing the idea of permanent installations rather than temporary exhibitions, which he believed degraded the art. 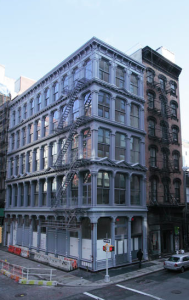 By the early 1990s, Judd realized his building was beginning to deteriorate and consulted a team of building experts to assess its condition. At the time, the required upgrades were not financially feasible and the project was shelved until a plan could be developed. The building remained an active studio for Judd until his death, at which time it was taken over by the Judd Foundation, an entity created in the artist’s last will and testament. The Judd Foundation, which now is headquartered in the cast-iron-façade building, directed the restoration Judd couldn’t realize during his lifetime.

The foundation’s primary mission was to preserve the studio and open it to the public so it could experience Judd’s work the way he intended it to be displayed. “The mantra put forth by Donald Judd and the foundation was that the building was not to be changed from the way Judd left it,” says Ray Quinn, principal with consulting engineering firm Arup, New York. Quinn adds this posed some interesting design challenges to the Arup team. The cast-iron façade was in a serious state of decay; the outdated heating system had been deferred for many years; and there were major building code and life-safety considerations that needed to be addressed if the public was going to be allowed into the building.

New York’s SoHo neighborhood was predominately residential in nature until the 1860s when manufacturing facilities started to appear. Industrial barons enjoyed flaunting their wealth and it showed in the buildings of the period. Those who could afford it commissioned elaborate masonry buildings with hand-carved stone detailing. Those who could not afford such lavishness took advantage of an innovation of the industrial revolution: cast-iron façades.

Cast-iron-façade components could be made with very ornate detailing in factories and didn’t require skilled labor. These components were essentially mixed and matched based on the aesthetic whim of the architect. Buildings of the time typically were constructed out of heavy-timber framing, and the cast-iron components were fastened to the framing as a skin.

Cast-iron building façades fell out of favor in the late 1800s because catastrophic building failures were occurring during structure fires. Cast iron has a tendency to become brittle and deform when exposed to fire, which was a very real danger in that time period. Developments in modern steel rendered these cast-iron pieces obsolete and changed the way buildings were constructed forever.