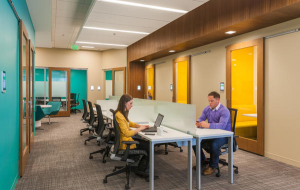 For commercial building owners, the opportunity to retrofit existing real estate into co-working spaces can open up an untapped revenue stream.

If you’re one of those people who still clings to a traditional view of the workplace—that jobs are performed in a clearly defined office space between the hours of 9 a.m. to 5 p.m., for example—the following statistic might come as a shock to you: According to the Washington, D.C.-based Bureau of Labor Statistics, 40 percent of the workforce will be freelancers, temps, independent contractors and “solopreneurs” by 2020. Let that number sink in for a minute. In just five short years, 65 million Americans will be spending their days somewhere other than a dedicated office. Whether it’s at home, at the corner Starbucks, or most likely in a co-working office space, the implications are profound for individuals, companies and building owners alike. By definition, co-working refers to “the use of an office or other working environment by people who are self-employed or working for different employers, typically so as to share equipment, ideas and knowledge,” according to Wikipedia.

As more of the self-employed seek shared environments to keep overhead costs at a minimum, co-working spaces have emerged as a viable business model and are increasing in popularity at a rapid pace. According to research conducted by Deskmag.com, 60 percent of existing co-working offices were slated to acquire new space for their members in 2014. Additionally, the survey revealed that seven out of 10 co-working facilitators report their availability of desk space can’t keep up with the public’s demand.

“There’s been, of course, a big increase in startups and freelance workers and entrepreneurs, especially as an outcome of the Great Recession,” explains Lisa Pool, CID, LEED AP, interior design leader at Perkins+Will, Minneapolis. “There’s been a rise in mobile technology, so the co-working sites really appeal to a lot of these individuals who can find the ability to work when and where they want.”

Pool notes while many freelancers often begin working at home or a corner coffee shop, most quickly realize those spaces don’t support the robust needs and diverse work requirements they have, which has also contributed to the rise of co-working sites. 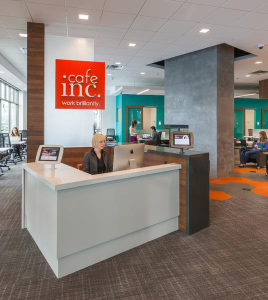 Many co-working facilities attract customers with great amenities, such as coffee bars and cafés, high-speed WiFi connections and even game rooms.

The advantages of co-working extend well beyond convenience and mobility, however. Co-working has been shown to be a more effective and beneficial framework for conducting business overall with measurable results. As illustrated in an infographic for the webinar, “The State of Co-working in 2015,” presented by Officevibe and Wix, there are a number of benefits to co-working over a traditional office environment, including:

Additionally, a recent Forbes.com article noted co-working spaces aren’t just for the self-employed; larger companies, like AT&T and Zappos, are already capitalizing on the paradigm shift toward nomadic workers. Likewise, Amazon, Google, Twitter and half of the Fortune 500 companies offer their staff temporary workspaces, according to Fast Company. Essentially, co-working is poised to make the traditional office setting “as obsolete as fax machines and dial-up Internet,” the Forbes article concluded.

HVACR Foundation Reports 115,000 HVACR Technicians Will Be Needed by 2022

A Tulsa, Okla., Building, Once a Model T Dealership, Is Transformed into a Co-Working Space

Be the first to comment on "As Nearly Half of the Workforce Becomes Independent, Co-working Spaces Will Lead the Way into the Future of the Workplace"