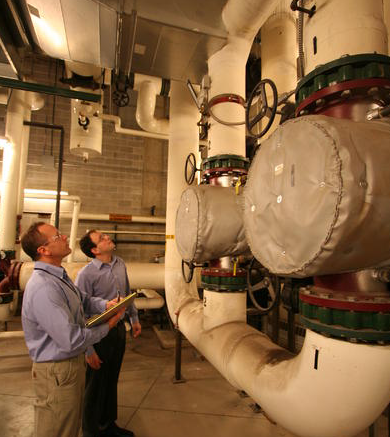 An energy audit is a systematic approach to problem solving and decision-making. The primary goals of energy audits are to qualify and quantify how the building energy systems are performing now, how that performance can be improved, and what will be the outcomes of those improvements for the owner in financial and non-financial terms.

Energy audits vary in depth, depending on the configuration of the building energy systems, the project parameters set by the client, and the scope and capabilities offered by the energy auditor. Because it usually is not possible to know where the audit process will lead and what level of effort will be most cost-effective, Atlanta-based ASHRAE (the American Society of Heating, Refrigerating and Air-Conditioning Engineers) has defined three progressive levels, or types, of audits.

These audits, and the upgrade that is completed as a result, usually will qualify for utility and tax incentives to defray the cost. Not all energy audits are the same, and it is helpful to understand the various levels of audits that are performed. 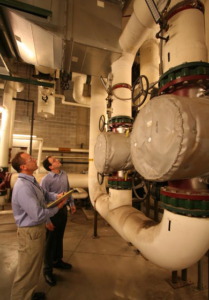 The Level 1 audit sometimes is called a“simple audit,” “screening audit” or “walk-through audit” and is the basic starting point for building energy optimization. It involves brief interviews with site operating personnel, a review of the facility’s utility bills and other data, and an abbreviated walk-through of the building. The ASHRAE Level 1 audit is geared toward identification of the potential for energy improvements, understanding the general building configuration, and defining the type and nature of energy systems.

The audit should result in a preliminary energy-use benchmark and a short report detailing the findings, which may include identifying a variety of recognizable efficiency opportunities. Usually this report does not provide detailed recommendations, except for very visible projects or operational faults.

The ASHRAE Level 1 audit is intended to help the energy team understand where the building performs relative to its peers; establish a baseline for measuring improvements; decide whether further evaluation is warranted; and, if so, where and how to focus that effort. This will help minimize the cost of the more intensive higher-level work involved in the Level 2 or 3 audits. Level 1 also will outline the range of potential financial incentives available from federal, state, local and utility sources.

The next step for most facilities is the ASHRAE Level 2 audit/assessment. A Level 2 project starts with the findings of the Level 1 audit and evaluates the building energy systems in detail to define a variety of potential energy-efficiency improvements. These systems should include the building envelope; lighting; heating, ventilation, air conditioning (HVAC); domestic hot water; plug loads; and compressed air and process uses (for manufacturing, service or processing facilities).

The audit begins with a detailed analysis of energy consumption to quantify base loads, seasonal variation and effective energy costs. From there, the study should include an evaluation of lighting, air quality, temperature, ventilation, humidity, and other conditions that may affect energy performance and occupant comfort. A performance simulation is usually part of the process, so the team can estimate changes in energy usage resulting from potential optimization projects and compare those data to cost estimates to implement the projects. This can be a computer-simulation model, spreadsheet models or a variety of other engineering tools. The process also includes detailed discussions with the building ownership, management, and occupants to explore potential problem areas and clarify financial and non-financial goals of the program.

The Level 2 audit should result in a clear and concise report and briefing with the owner and management team describing a variety of energy-efficiency measures (EEMs), including no- and low-cost measures, modifications to system controls and building automation, operational changes and potential capital upgrades. The findings should include general costs and performance metrics, as well as a means for the owner to evaluate the EEMs and decide how to proceed with implementation. 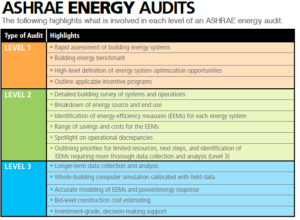 Many of the EEMs revealed during the ASHRAE Level 2 audit can be implemented quickly with rapid or immediate financial payback for the owner. Other EEMs will require more detailed analysis of benefit and cost and the other goals that are important to the owner. The audit should define next steps to accomplish this analysis and decision-making, sometimes through discussion with manufacturers or suppliers or other relatively simple means. For other EEMs involving complex interaction among building systems and potentially large financial investments, it may be necessary to dig deeper into the building operation and the human factors influencing performance. This is where the ASHRAE Level 3 audit becomes essential.

Some of the system upgrades or retrofits revealed by the Level 2 audit may require significant investments of capital, personnel and other limited resources. Before making this level of investment, the owner will want to have a much more thorough and detailed understanding of the benefits, costs and performance expectations. This is the purpose of the “investment-grade” Level 3 ASHRAE audit.

There may be only a few capital-intensive EEMs exposed by the Level 2 audit or there may be dozens for larger facilities. Investment levels can range from tens of thousands to tens of millions of dollars. In most cases, because this cannot be clearly determined or accurately estimated in advance, the recommendation and scope definition for a Level 3 audit usually is an outcome of the Level 2 process.

The ASHRAE Level 3 audit usually focuses on a “whole-building computer simulation,” where a computer program is used to very accurately model the way the brick-and-mortar building would respond to changes in the energy systems—whether those are major HVAC retrofits or architectural modifications to walls, windows and roof. The ASHRAE Level 3 audit involves much more detailed data collection during the course of weeks or months. Data loggers typically will be placed temporarily to monitor the operation of pumps and motors, temperatures of affected spaces, lighting levels, switching behavior and other factors. These data are used to calibrate the computer model, so it responds to inputs and changes the same way the building could be expected to respond. This calibration is checked and validated by simulating a year or more of historical climate conditions to determine whether power and energy usage in the model mirrors actual energy power and energy usage.

Once the computer model is responding like the real building, changes to energy systems can be simulated with very accurate results. Combining that process with construction-grade cost estimating supports informed investment decisions.

Before beginning an energy audit for a building or portfolio of buildings, St. Louis-based Microgrid Solar recommends a preliminary energy-use analysis to compare the Energy Usage Index of each building with the national average and to identify high- and low-energy performers. This typically is done using the Energy Star Portfolio Manager benchmarking tool. The analysis requires access to energy consumption and cost data for the last 12 to 36 months. Once this “benchmarking” analysis is complete, a recommendation is made as to which buildings should be audited first and the type of audits to be carried out.