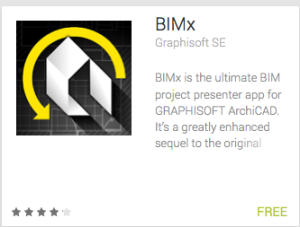 GRAPHISOFT, a Building Information Modeling (BIM) architectural software developer, announced its award-winning BIM presentation app, BIMx Docs, has been released for Android phones and tablets in Google Play. This release makes BIMx Docs available on the largest installed base of any mobile OS in the world.

This newest app hosts the same functionality as the iOS version, but with a simplified license structure:

There is only one app available for download, which is free and opens Hyper-models in demo mode (3D only);
The full BIMx Docs functionality (for an unlimited number of models) can be purchased inside the app for $50.

In addition to making the entire workflow virtually hassle-free, GRAPHISOFT’s BIMx Docs for ArchiCAD saves architects considerable money and the misery that comes with printing plans. The BIMx Docs functionality for a user’s current and future projects can be unlocked in one step – all for the price of printing one complete documentation set. Clients and other stakeholders can follow a building project simply by asking their architect to send them the BIMx Hyper-model of the project to their mobile device.