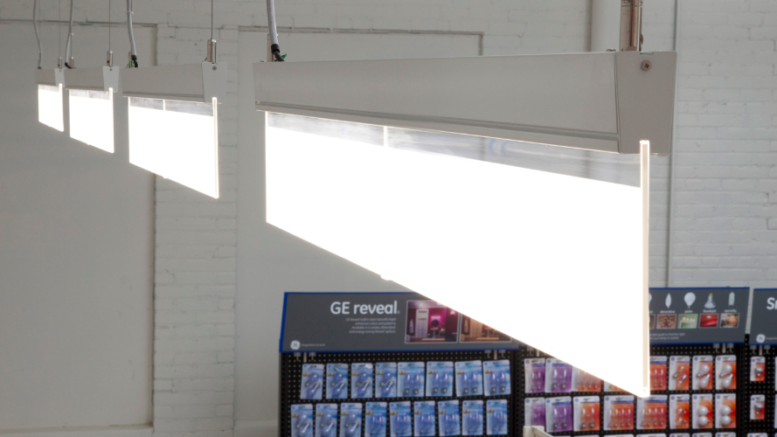 Posted By: Retrofit Magazine Editor May 8, 2013 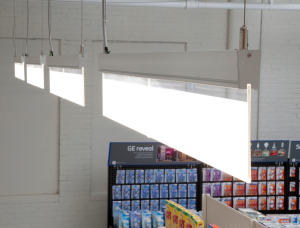 With the new Lumination EL Series LED Luminaire, GE offers a minimal, blade-like fixture that slashes energy costs. When switched on, the Lumination EL Series LED Suspended Luminaire produces an even glow; when off, it appears nearly transparent with individual LED diodes hidden inside the frame so as not to detract from the look of the environment where it is installed.

The thin, uniformly illuminated LED blade is suspended from the ceiling and powered with GE’s Intrinsx Optical Technology that maximizes the performance, control and efficiency of each LED diode—directing otherwise wasted light to where it is needed. This makes GE’s new fixture an LED solution for retail lighting, open-plan offices and other general ambient lighting environments.

A product of GE ecomagination, Lumination EL Series LED Luminaires offer a multitude of benefits, including improved energy efficiency, longer life and high-quality color consistency. Rated for 50,000 hours, the LED fixtures are fully dimmable and can be linked to sensors and controlled according to the level of natural light present to provide the best possible energy savings.

GE’s Lumination EL Series LED Luminaires are available with different mounting options that allow for suspension with remote gear housing, surface mounting for solid ceilings or installation onto a track system. Their thin-yet-durable design—the fixtures measure 48-inch and 72-inch lengths at 10 inches high and just 2 inches deep—allows them to also be connected together in long, continuous runs for maximizing lumen (light) output.

Are You Ready To LED?